The Music And The Muse

It was raw and crude and so mesmerizing. It wasn't just the music, it was the passion with which they sang, the heart-felt love for the Khwaja that is so missing from the recorded voices we usually hear

April 3, 1325, Delhi— I imagine a student bereaved at his beloved master's death, the same master who had once expressed the desire to be buried with him in the same grave, if only Shariah allowed. And I can only imagine the immense love and affection that Hazrat Nizammudin Auliya and Amir Khusrau shared. Hazrat Nizamuddin Auliya, one of the greatest Sufi saints of the Indian subcontinent was so fond of his student, the 14th century poet and musician Amir Khusrau that he is believed to have said that people must pay tributes to his student before paying tributes at his grave.

April 3, 1325 is the day of the Auliya's 'visaal'— an Arabic word meaning 'union', popularly used in Urdu and Persian poetry to signify the coming together of two lovers— in this case, it signifies the Auliya's union with his Creator. Nizamuddin Auliya was buried at what has now become the Nizamuddin dargah in Delhi and Amir Khusrau, the doting student is buried at his master's feet. Every year, the Nizamuddin Urs or annual commemoration takes place at the dargah around March/April, depending upon the Islamic calendar.

In Sufi tradition, God is often referred to as the Beloved, and being one with the Beloved is all that a Sufi dervish desires. The death anniversary of a Sufi saint is therefore called 'Urs' which literally means 'wedding' and has its roots in the word 'Uroos' or bride. The Nizamuddin Urs therefore is a celebration of the marriage of the Auliya with his Beloved.

The narrow lanes of Nizamuddin Basti which has grown around the dargah were absolutely packed with pilgrims from far and wide. The multitudes poured into the little shops— some for a meal, some to buy chaadar, rose petals and sweet meats to offer at the dargah and some to simply keep their foot wear. Heads covered with skull caps, duppattas and burqas jostled their way into the dargah premises amidst screaming shopkeepers and their crazy marketing strategies. I passed the Ghalib Academy with Ghalib's maqbara on the side and I couldn't help wondering what that man might have said at the strength of faith that pulls so many to the dargah every year. It almost seemed like Ghalib was making the last attempt at redemption, lying in death so close to the saint who was often called 'Mehboob- e-Ilahi' for his undying love and devotion to God.

One needs no directions to find the dargah in the mesh of lanes— just keep following the string of shops and the assortment of feet. The muezzin called for the Maghrib prayers— the azaan had never sounded more beautiful. That penetrating voice calling out— 'La Ilaaha IlAllah' reverberated through the evening air inside the dargah premises. Men neatly filed in rows stood behind the Imaam— no pushing, no elbowing, no jostling, almost as if they had been practising this drill for years. As they bowed down in prostration, I saw in that moment of passionate submission, a faith which I shall never quite understand. 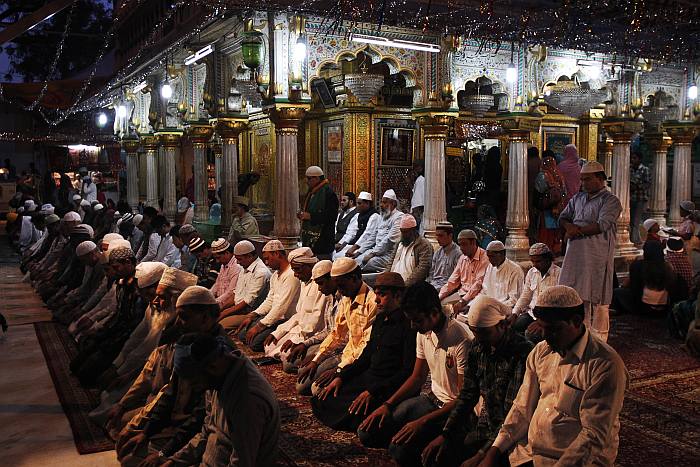 The stream of eager pilgrims flowed in and out of the dargah, some with large families, some solo, some carrying large offerings covered with ornate chaadars on their heads. I stood in a corner and watched the colourful multitudes bring their hopes, faith and devotion at the feet of the Khwaja. Beggars begged, children howled, people prayed. And then I saw what I had been dying to see. A man with a dhol, followed by three kids and a harmonium sat themselves facing the Khwaja's grave and instantly people sat down around them and thus began an evening of qawwalis— nothing like the sort that one hears in movies or watches on television. This was raw and crude and so mesmerizing. It wasn't just the music, it was the passion with which they sang, the heart-felt love for the Khwaja that is so missing from the recorded voices we usually hear. It was that evening air mixed with the fragrance of rose petals and non-alcoholic perfume that transported me to a place where there was nothing except me and the man they sang so fondly of. It was Amir Khusrau who had mixed the elements of Persian and Indian music traditions to come up with the 'qawwali' as we know it today and there couldn't possibly have been a better tribute to his teacher.

There were times when a new group of qawwals would come to pay their tributes at the dargah and the already singing group would make way for them. And while I was listening to one of these groups, I could feel a strange chill down my spine. It felt as if I had brought a burden at the Khwaja's durbaar and I was shedding it bit by bit and the music just kept filling in the void. But I guess that is what a good qawwali does to you— you find yourself on the verge of tears and keep wondering what is wrong with you.

Every time I visit the dargah, I have one complain— the commercialisation of faith and this time it was even worse. Dervishes kept fanning so hard for cash that duppattas would keep flying off heads, sending modesty for a toss and it was even worse for the firangs. Showering money on the qawwals out of appreciation is another practice I am not particularly fond of. And then some people keep going into these trances or so people believe when they might just be epileptic! But then once the music fills your heart and your soul begins to whirl like a dervish to its harmony, you cannot have too many complaints left.

It was only when the muezzin sounded the azaan for the Isha prayers and the qawwals vanished to be replaced by the neat files of praying, prostrating men, did I leave the dargah to look for my slippers and make my way through the criss-crossing lanes of Nizamuddin basti to a world of honking vehicles and racing time— the voices remained though, they always will.