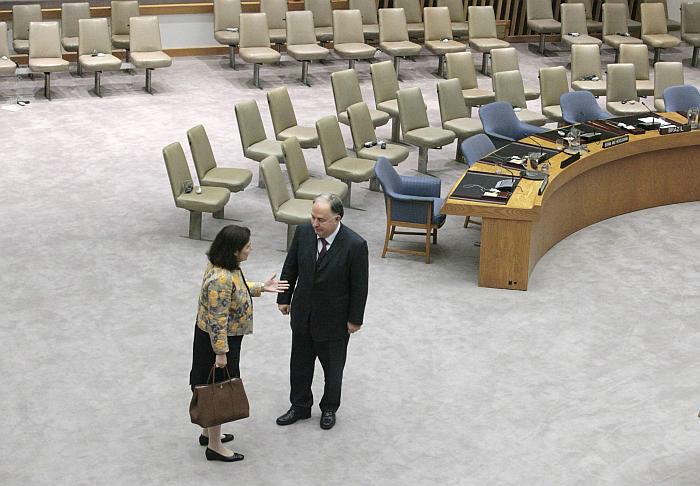 Long, unfinished wars in Iraq and Afghanistan – coupled with the global recession triggered by Wall Street excesses – are widely seen as symptoms of the relative decline in US economic and military clout. Rising middle powers such as Turkey and Iran in the Middle East and Brazil in South America now challenge the diplomatic supremacy of America.

This week, the new contours of diplomatic power were on display in Istanbul. The city was the site of the summit of 20-member Conference on Interaction and Confidence-Building in Asia, presided over by Turkish Prime Minister Recep Tayyip Erdogan. It also provided a venue for the first Turkish-Arab Cooperation Forum, chaired by Turkey. A member of the North Atlantic Treaty Organization – and until recently a rare regional ally of Israel – Turkey basked in the international limelight. An emboldened Turkey also defied Washington, voting against the US-sponsored resolution on Iran sanctions at the UN Security Council.

In mid-May, along with his Brazilian counterpart, Turkish Foreign Minister Ahmet Davutoglu signed a deal with the Iranian foreign minister, undercutting US efforts to isolate Iran for refusing to abandon its uranium-enrichment program. Iran agreed to ship 1,200 kilograms of its low-enriched uranium to its new friend Turkey rather than Russia as proposed by the European Union. In return, Russia and France would provide 120 kilograms of medium-enriched uranium for a medical research reactor in Tehran.

A fortnight later, Turkey found itself at center-stage when Israel’s elite naval force attacked a flotilla, sponsored by a Turkish human rights organization, on its way to blockaded Gaza with civilian supplies. That assault, codenamed Operation Sea Winds, left nine Turks dead and killed the two-decades-old special relationship between Turkey and Israel.

These episodes established Turkey, straddling Europe and Asia, as a rising middle power in a strategic region. These incidents, far from being stray, are an integral part of a process which began with a peaceful political earthquake – the November 2002 victory of the Justice and Development Party, Adalet ve Kalk?nma Partisi or AKP, a reformist party with Islamic origins, ending a half century of opportunistic coalition governments in Turkey.

It is a descendant, albeit moderate, of two earlier Islamic parties, banned by the ultra-secularist judges of the Constitutional Court in 1998 and 2001 for violating the country’s secular constitution.

Along with a sweeping anti-corruption drive by the AKP government, led by Erdogan, was an overarching review foreign policy.

To fully realize its power and influence, argued Davutoglu, then political science professor and Erdogan advisor, Turkey must utilize the strategic depth of its neighborhood, focusing first on those with whom it has cultural affinity. This led Erdogan's administration to forge cordial links with Iran and Syria. The government mediated between Syria and Israel to resolve the issue of the Israeli-occupied Golan Heights – without much success due to change of governments in Israel. After re-election in July 2007, the Erdogan government proceeded to reconcile with historic foes, Armenia and Greece.

As a non-permanent member of the UN Security Council, Turkey worked closely with Brazil to construct a deal on the long-running issue of Tehran’s nuclear program that restored core elements of the October 2009 agreement that unraveled after Iran changed its mind.

To Turkey’s disappointment, the Obama administration backtracked, insisting on a priori suspension of enrichment, reverting back to its predecessor’s stance, which was unacceptable to Tehran. This did not surprise most Turks: A 2009 Pew Global Attitudes survey conducted showed that only 14 percent had a favorable view of the US, the lowest figure among 25 nations surveyed.

In pursuit of its adopted doctrine of cultural affinity, Turkey hosted the 57-member Islamic Conference Organization summit in June 2004. Backed by Saudi Arabia and Iran, its nominee was appointed ICO secretary-general.

Around that time, relations with Israel began to cool. In March 2004, Erdogan condemned Israel’s assassination of Hamas leader Shaikh Ahmad Yassin in Gaza as an act of state terrorism.

Turkey’s diplomatic recognition of Israel can be traced to its application for NATO membership. Recognizing Israel was a US precondition; Turkey did so and became NATO’s sole Muslim member in 1952.

That did not inhibit the Turkish government from recognizing the Palestine Liberation Organization in 1986.

Following the Israeli-Palestinian Oslo Accord of 1993, the special relationship between Turkey and Israel blossomed. In 1997 the two countries signed a free-trade agreement. Military cooperation increased to the extent that the two states conducted annual joint armed-forces exercises. Ankara allowed Israel to set up a clandestine listening post near its border with Iran.

In the wake of Israel’s Operation Sea Winds, Ankara cancelled the upcoming joint military exercise with the Israeli Defense Forces. While both sides will honor current defense contracts, there’s no prospect of further military deals between the two countries.

The boycott of the popularly elected Hamas government in the Palestinian territories in 2006, followed by the three-week long Israeli attack on Gaza in December 2008-January 2009, strained Israeli-Turkish relations to a breaking point. “When it comes to killing, you know well how to kill,” Erdogan shouted at Israeli President Shimon Peres as the January 2009 World Economic Forum.

Fatigue has set in among Ankara’s policymakers in another diplomatic field. While they have not withdrawn their application for full membership in the European Union, under consideration since 1999, they are less keen for club acceptance. Turkey’s associate membership of the EU’s antecedent, the European Economic Community, goes back to 1963.

Given the Eurozone's economic crisis and persistent opposition of Germany and France to Turkey's membership, the EU gloss has worn off. Turkey focuses on the region where it holds a central position geographically.

Their power eroded as rural folks migrated to urban centers in large numbers from the 1960s, became literate and realized the power of the ballot. Starting in the mid-1980s, an increasing number of ordinary Turks benefited from unprecedented access to information and personal mobility – satellite television, telephones and cars. With the literacy rate at 90 percent–plus, working and lower middle classes lost their awe of the White Turks.

Rural immigrants to cities – accounting for a quarter of the national population of 72 million – found solace in the mosque and a caring institution in AKP. In the unfamiliar, impersonal urban environment, they found ethical moorings in Islam.

They along with energetic entrepreneurs from Anatolia, covering 97 percent of Turkey’s territory, became beneficiaries of the Erdogan administration’s adroit management of the economy with annual GDP growth of 5 to 7 percent.

In fact, Turkey’s growing economic might undergirds its political ambition. The World Bank ranks Turkey, with per capita GDP of $12,480, as an upper middle-income country. Its public debt of 49 percent of the GDP is healthy, far below that of leading Western nations. Turkey withstood the global credit crunch better than most countries. No bank has gone bankrupt due to tough regulations, with AKP well aware that banks were the major source of corruption among the traditional secular parties.

Erdogan foreign policy realigns Turkey with its history and geography, in the process raising its regional and global status.