Kim Jong-il was surrounded by myth-making, little is known about North Korea, and even less about the new ruler, Kim Jong-Un 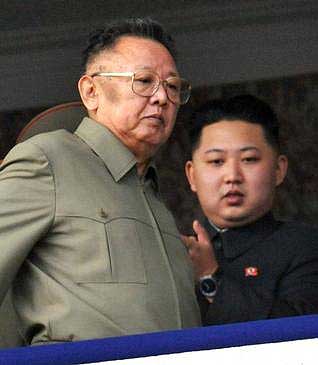 One need not be surprised by the regional and global nervousness over the death of Kim Jong-Il, the ruler of North Korea, following a heart attack reportedly suffered by him on board a train on the morning of December 17, 2011, and by the naming of his third son and party-anointed successor Kim Jong-Un (pronounced Kim Jong-Woon) as the new ruler by the Workers’ Party of Korea (WPK) and government within two days of Kim Jong-Il’s death. Kim Jong-Un is still to be appointed as the General Secretary of the party and the Chairman of the Central Military Commission, which are the official designations of the ruler of North Korea. Kim Jong-Un can be elected to these posts only by the Party Central Committee. Kim Il-Sung, the first President, was designated after his death in 1994 as the “Eternal President”. Hence nobody else is designated as the President.

The fact that the death of Kim Jong-Il and his succession as expected by Kim Jong-Un were announced so fast would indicate that there was no apparent attempt to challenge his succession either by other members of the family or by senior elements in the party and the Army, which had a role in decision-making.

The reports of considerable nervousness—even in China which had a benign and close relationship with Kim Jong-Il—could be attributed to the fact that so little was known politically about North Korea and its new ruler to friends as well as perceived foes of the country.

North Korea is the only post-cold war remnant of an old style Communist state, with an old style communist political structure, with old-style secretive ways of functioning. However, it differed from other Communist States of the past in its dynastic succession. Its founder in 1948 Kim Il-Sung was succeeded on his death in 1994 by his son Kim Jong-il , who in turn has now been succeeded by Kim Jong-Un.

Kim Jong-il had been groomed by his father for over 10 years to be his successor. He, therefore, had no challengers on his assuming office in 1994 and thereafter. The 28-year-old Kim Jong-Un, on the contrary, had been groomed by his father hardly for 15 months before he found himself exercising the powers of the office. It is, therefore, natural that many observers of North Korea, even in China, apprehend that Kim Jong-Un might not have had sufficient time to overcome opposition to his rise in power from family circles—particularly his two elder brothers who were overlooked by his father on the reported ground that they were unfit to rule the country— as well as from the party and the Korean People’s Army, the main pillars of power in the world’s remaining State concealed from the rest of the international community by a communist-style iron curtain.

So little is known about North Korea—its political infrastructure, its decision-making apparatus, the inter-personal and inter-institutional relationships that determine political stability, the state of its economy and its military mind-set. To the outside world —particularly to its neighbour South Korea— North Korea has been an unpredictable state with unpredictable reflexes and adventurist impulses.

Even less is known about the new ruler. All that is known about the pre-2009 brand of Kim Jong-Un is that he was the third son of his father born to his third wife — reportedly a Japanese of Korean origin— that he had at least three, if not longer, years of schooling in the international school of Berne, the capital of Switzerland, where he acquired a working knowledge of English, French and German, that on his return from his Swiss school he studied from 2002 to 2006 in the Kim Il-Sung military university named after his grandfather. He became active in party and government affairs in 2007 as a member of the organisational committee of the party and as an official of the Ministry of Public Security, which was responsible for the collection of external intelligence.

Till 2009, his name had never figured even in rumours as a possible successor to Kim Jong-Il. He was considered too young and too inexperienced in party and Army affairs with very little exposure to the party as well as the Army. The general expectation till 2009 was that one of his two elder brothers might succeed Kim Jong-Il. Following a stroke reportedly suffered by Kim Jong-Il around this period, rumours started circulating in South Korea that Kim Jong-Il was disillusioned with his two elder sons and was, therefore, contemplating to make Kim Jong-Un his would-be successor at the third conference of the WPK, which was scheduled to be held on September 28,2010.

These rumours acquired credence in August 2010, when Kim Jong-Il undertook an official visit to China—the second in the year that was very unusual— a month before the party conference. There were strong rumours that Kim Jong-Un had accompanied his father.

Kim's visit was confined to Jilin and Heilongjiang, where he visited several agricultural and industrial establishments— reportedly in order to learn from the Chinese experience in the modernisation of its economy. In this connection, the Chinese media referred to a visit earlier made by him —without saying when— to Vietnam to learn from its experience in modernisation. Kim Jong-Il visited a food processing factory, a high-speed train factory and an elementary school in Jilin where his father had studied in the 1920s.

The Chinese State TV reported that President Hu Jintao had met Kim Jong-il in Changchun, the capital of the Jilin province, on August 27, 2010. It carried visuals of the meeting between the two leaders and a report on a banquet hosted by Hu in honour of the North Korean leader.

An important objective of the visit was to brief the Chinese leaders about what Kim Jong-Il called "the rising generation" and to reassure Beijing that the expected generational changes would not affect North Korean bonds with China. He was quoted as having stated as follows at the banquet hosted by President Hu: "With the international situation remaining complicated, it is our important historical mission to hand over to the rising generation the baton of the traditional friendship passed over by the revolutionary forerunners of the two countries as a precious asset so as to carry it forward through generations."

This strengthened speculation that at the party meeting in September,2010, Kim Jong-Il might officially indicate his plans for his succession which might involve the elevation of Kim Jong-Un. Why did Kim Jong-Il feel the need to reassure the Chinese that the "rising generation" would be as close to China as the present generation and the preceding one of his father? Was his visit to the Chinese school which his father had attended meant to emphasise the close links of his family with China and calm possible Chinese misgivings about the impact of the Swiss upbringing of Kim Jong-Un on future North Korean policies?

China has reasons to be worried by the rise of Kim Jong-Un to power. He has never studied in China in so far as it is known, he has had very little exposure to China, its leadership and people and his only limited exposure to the outside world has been in Switzerland. Would it have any impact on North Korea’s policies. King Jong-il apparently anticipated that such questions would trouble Beijing were his third son to become his successor and he wanted to reassure them that there would be no change in the primacy accorded by North Korea to its relations with China.

Chinese views over what could happen in North Korea after Kim Jong-il were reflected in a Global Times article of September 28, 2010, which said:

“Despite varied versions of the successor choice and to which post the figure will be elevated to at the meeting, some analysts are dismissing the possibility of political chaos as a result of such a transition, saying the country won't undergo any significant policy change that could pose downsides on the security situation of the Korean Peninsula and northeast Asia. A stable North Korea is in China's national interests, regardless of who will be the next leader, experts say.”

The visit to China by the father and reportedly his son too was followed by the expected elevation of Kim Jong-Un at the party conference held on September 28,2010. Kim Jong-Un and Kim Kyong Hui, the 64-year-old influential sister of Kim Jong-Il, were elected as members of the 124-member Central Committee. But, surprisingly, while Kim Kyong Hui was elected a member of the important Politbureau of the Central Committee, Kim Jong-Un was not, thereby giving her a more important position in the party. The speculation was that she and her husband would act as mentors in putting Kim Jong-Un through his paces. Will they be content with doing so or will they try to upstage Kim Jong-Un and manipulate themselves into power. This is a question that would worry Kim Jong-Un in the months to come.

The party conference also elected Kim Jong-Un as one of the two Vice-Chairmen of the Central Military Commission, the other Vice-Chairman being Ri Yong Ho, chief of the General Staff of the Korean People's Army (KPA). While Kim Jong-Un, who had never held a military rank before, was appointed a General, Ri Yong Ho was promoted as Vice-Marshal. Thus, Ri Yong Ho was given a more important position in the Commission.

Thus, Kim Jong-Un was given only the third position in the Party after his father and aunt and the third position in the Central Military Commission after his father and Ho. Despite this, the message that came out from the conference was that it had endorsed Kim Jong-Il’s plans to make his third son his successor. Till now, there were no reports of any opposition to this.

The transition in North Korea would be of great interest and concern to China, South Korea, Japan, the US and India. Any political instability in North Korea could cause large refugee influx into China. China would be nervous over the dangers of Kim Jong-Un cutting North Korea’s links with China and giving his policies a pro-Western orientation. For South Korea, the transition could be a threat as well as an opportunity. A threat because of the possibility of an insecure leader giving full rein to North Korea’s adventurist impulses that would most probably be directed at South Korea. An opportunity because of the possibility of a more moderate leader working towards a re-unification of the two Koreas.

South Korea, Japan and the US would be worried over the nuclear policies of the new ruler. Would he be inclined to resume the six-power talks on the nuclear issue or would he maintain the present hardline in his attempt to avoid any threat from the army or make it even harder.

Indian concerns would be over North Korea’s nuclear and missile relationship with Pakistan. This picked up momentum under Kim Jong-Il after Benazir Bhutto’s visit to North Korea during her second tenure as the Prime Minister (1993-96) and have continued since then. Will Kim Jong-Un maintain this relationship or even develop it further?

It is likely that till Kim Jong-Un consolidates his position and feels secure in office, he would continue his father’s policy of close relations with China and placating the Army’s expectations on the nuclear issue—whether on the question of North Korea’s nuclear arsenal or its military and missile supply relationship with Pakistan. Any new policy initiatives are unlikely.

If there is instability arising from a post-succession power struggle, North Korea’s unpredictable and adventurist impulses could come to the fore.