A change in the United States’ immigration policy made this week by president Barack Obama will help legalise the status of about 5 lakh Indians, many of whom are from the Patel community of Gujarat. 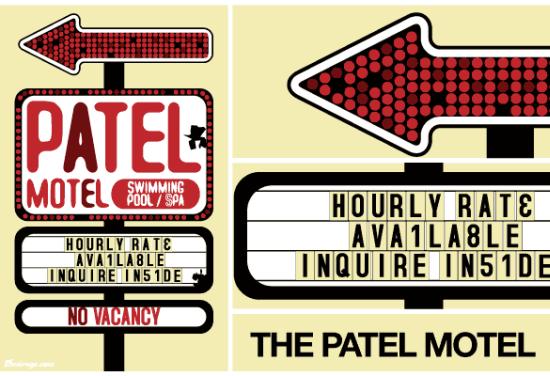 When I was in school 30 years ago, a friend of mine applying for a visa to the United States changed his last name. He was a Patel and thought that if he applied with that name he stood a good change of being rejected. I do not know if that was true (I myself applied at the age of 16 and got a visa) but it is certainly true that there were and there are a lot of illegal Patels in America.

A change in the United States’ immigration policy made this week by president Barack Obama will help legalise the status of about 5 lakh Indians, many of whom are from the Patel community of Gujarat.

The Times of India reported that Obama’s order “will largely pertain to an estimated 4.1 million undocumented parents of US-born children (and therefore citizens) and about 300,000 undocumented immigrants who came to the US illegally as children, he also announced broad procedural changes that will make it easier and faster for high-skilled immigrants, graduates, and entrepreneurs to stay and contribute to the American economy in a transparent effort to maintain US edge over other nations.”

A report last year claimed that there were 1.5 lakh Patels in the US. This number is probably around 2 lakh because many Patels use other last names, like Amin. Most Patels in the US are legal and they are one of the most successful communities of that country. A New York Times report by Tunku Varadarajan in 1999 claimed that a half of all US motels were run by Indians, mostly Patels. He wrote that Patels were “vaishyas, or traders, who were once employed to calculate the tithes that were owed to medieval kings by farmers in Gujarat, an Indian state on the Arabian Sea, where their origins lie. Most Indians believe that these people have commerce in their blood. And the Patels themselves seem to believe it, too.”

This is not true, and comes mainly from myths that Patels have spread about themselves so vigorously that they may themselves have come to believe them. The Patels are peasants, from the same grouping as all the other peasant castes, like Patils, Reddys, Yadavs, Gowdas and Jats, and come from the lowest of the four ‘savarna’ or recognised castes, called shudra in Manusmriti.

Patels are slightly different from these other communities because they are vegetarian and inclined towards business. This is not because of any inherent tendencies, and they have no history of enterprise before the 20th century, but because they have absorbed the mercantile traditions of Gujarat, which is dominated by the Jain merchant.

The New York Times writer Varadarajan unsuccessfully tries to understand why it was that Patels “seek their fortune in the lodging niche? Why not hardware stores, pet shops, drugstores?”

One reason is that the scale of the business is different and motels can be expanded. The second reason is that it allows the Patels a dual identity. They deal with America through the motel’s counter. Behind the counter, they can recreate India with kadhi-bhaat cooking in the kitchen, and Ramayana episodes and Bollywood playing on the television. It is a business that requires hard work more than intelligence and the Patel is willing to put in that work.

This is why even the illegal Patel in the US is an asset to the country because he keeps to himself and his community, and is not a nuisance for the state.

It must be said that the Indian immigrant in the west is more popular than Pakistanis or Bangladeshis. One reason is that he is usually from a higher social strata, and more likely to be a qualified professional. The other reason is that a large number of Pakistani and Bangladeshi immigrants, especially in Europe, have become radicalised. They have ganged up with the Arab groups that cause mischief, they have high levels of unemployment, and because of this are seen by the host society as a nuisance.

I was told by a Pakistani friend of mine that some Pakistanis he knew, particularly in the US, pass themselves off as Indian to avoid the trouble that has come with being associated with Pakistan in recent years.

Bangladeshis competently run the majority of sub-continental restaurants in Europe but these are branded as ‘Indian’. This is as much because the Indian brand is more attractive as it is because of the lack of knowledge of what and where Bangladesh is. A third reason is that very little of the ‘Indian’ food that the west is familiar with is Bengali.

Obama's decree will help all three sub-continental groups, but the largest beneficiary will be the Indians, particularly the Patels. This is good news both for the community and the United States.