How instead of harvesting a nutritious traditional food crop that could supplement the diets of the poor, farmers poisoned it just to grow more grain. 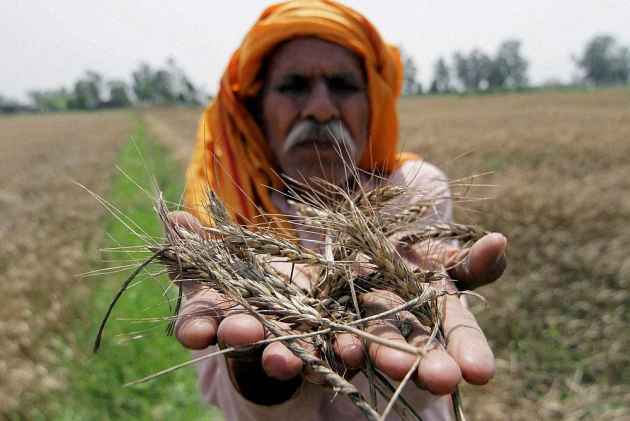 Before I left Malwa, I stopped by the home of Master Jarnail Singh, a 65-year-old school principal who in 2002 had brought the attention of the press to the number of cancers in the district when he noticed so many of his students falling ill. He believes the epidemic started in 1980 when the American bollworm first appeared and began devastating their crops, leading to heavier and heavier pesticide applications.

"The green revolution has brought us only downfall," Singh said. "It has ruined our soil, our environment, our water table. It used to be we had fairs in the village when people would come together and have fun. Now we gather in medical centers. Financially we have had a downfall as well. Every home here used to have 100 grams of gold. It was a source of great pride. Now, no one has even 20 grams. They've sold their jewelry to pay for fertilizer or irrigation, and they hardly make any profit. The central government has sacrificed the people of Punjab for grain."

The solution, Singh believes, is what he calls "natural farming." He is one of a growing number of farmers in the Punjab who are now planting organic wheat. He was hoping to harvest 30 quin- tals (111 bushels) of wheat that year on his small plot. "There is no future in the green revolution." Singh said. "But if we go to natural farming there is a lot of potential because you are financially sound, your health will be okay, and you will be prosperous, because the cost of production is much less."

I thanked the old schoolteacher and made my way to the door of his simple house. On one wall I noticed a glass case displaying several teaching awards, along with a framed picture of Vladimir Ilyich Lenin.

I pointed to the picture. "Are you a Communist, then?"

"Not on paper," Singh said. "But I've got a leftist ideology."

"What do you think Lenin would say about the green revolution?" "He would say exactly what I say," Singh said. "Natural farming is the way. Like politics, you have to work from the bottom up, at the grassroots level. Otherwise, everything is poisoned."

***
The harshest critic of the green revolution in the Punjab wasn't trained as a farmer at all. Vandana Shiva earned her master's degree in philosophy and PhD in theoretical physics before becoming India's most famous activist since Gandhi. Her books, lectures, and research efforts since the 1970s have excoriated the industrialization of food production around the globe. She holds particular ire toward the World Bank and World Trade Organization, whose free-trade agricultural policies she believes have devastated poor farmers, most of whom are women. And she has waged a bitter public battle against large biotech seed companies like Monsanto and Syngenta, which she believes are pushing expensive genetically modified seeds into India and elsewhere without regard for their safety or their impacts on local biodiversity. Time magazine named her an environmental "hero" in 2003, and she has won numerous awards for her efforts over the years.

I met Shiva in the cramped offices of her nonprofit Navdanya, the largest cooperative of organic farmers and seed savers in India, in a modest neighborhood on the outskirts of New Delhi. A small woman in her late 50s, Dr. Shiva entered the room in a rush of orange sari, wearing a large dark-red bindi on her forehead—the sign of a married woman among Hindus. She'd grown up on a small farm in the hill station of Dehradun, in the foothills of the Himalaya just east of Punjab. Her father was a forester, and while he was off in the woods her mother ran the farm. She attended Punjab Agricultural University and vividly remembered a happier Punjab of the late 1960s and early 1970s.

In her first book, The Violence of the Green Revolution, Shiva argued that much of the religious and political turmoil that had racked the Punjab from the mid-1970s onward had its roots in the growing economic disparities and unemployment that arose from the new agricultural technology. During this period a powerful Sikh separatist movement emerged that demanded an independent Punjabi-speaking Sikh state of Khalistan—which translates rather ominously as "land of the pure." The movement started peacefully but soon turned violent, with bombings, assassinations of government officials and journalists, and the downing of an Air India jetliner. Hindus were killed on public buses and trains. Punjabi police forces and Indian security forces responded in kind, and by the time the movement was crushed, some 30,000 Punjabis had died.

"That's six times the deaths during 9/11," Shiva said. "In Punjab every day there were killings from the '70s to 1984. The violence of the times was external. Lots of police actions. Now the violence is internalized with these suicides. In 1973 the subsidies were still there. When they started withdrawing subsidies, the troubles
started."

Shiva argues that if you look at the green-revolution monocultures on a systems level, they are not as productive as traditional agriculture. All the energy in the system is focused toward producing more seed. But the short-stalked varieties leave less straw for livestock to eat, and fewer nutrients to recycle into the soil. And with less diversity on the farm, she says, there is nothing to eat should the crop fail.

"I call it 'monocultures of the mind,'" she said. "There were 250 kinds of crops in Punjab before the green revolution. It was very diverse and very mixed. Corn bread with mustard greens is the cultural identity of the Punjab."

Shiva's favorite example is a traditional green called bathua (Chenopodium album), a member of the spinach and chard family incredibly rich in vitamin A, calcium, protein, and potassium that has been grown and eaten in the Punjab for centuries. But beauty, as always, is in the eye of the beholder. Also known as lamb's-quarter and goosefoot, bathua is one of the most widely occurring weed species in the world. It easily outcompetes maize, wheat, and rice for nutrients, and its tall, tough stalk and prolific tiny black seeds foul up machine harvesters. Researchers have documented crop losses of up to 50 percent in US cornfields due to a combination of lamb's-quarter and giant foxtail. Bathua also loves nitrogen fertilizer. When Indian farmers began pouring on chemical fertilizers in the 1970s, bathua threatened to overwhelm the new high-yielding grain varieties. So, broadleaf herbicides were introduced to control it.

Vitamin A deficiency has long been a major health problem among Indian children and nursing mothers. In 2004, research- ers at Johns Hopkins University estimated that 56 million Indian children, aged 5-15, suffer from vitamin A deficiency, including nearly 7 million who suffer some form of visual impairment—from night blindness to true blindness. Instead of harvesting a nutritious traditional food crop that could supplement the diets of the poor, Shiva says, green-revolution farmers poisoned it just to grow more grain.

Even some of the most hardened green revolutionaries in the Punjab now recognize its costs. Dr. G. S. Kalkat, now in his mid- 80s, was deputy director of the Punjab Department of Agriculture in 1964, and was one of Borlaug's staunchest disciples. Kalkat worked hand in hand with Borlaug and Dr. M. S. Swaminathan in Delhi. In the 1970s he became the agriculture commissioner for all of India, and from there he joined the World Bank as an agricultural adviser. He currently serves as chairman of the Punjab State Farmers Commission, where he has been working nonstop since 2005 to encourage Punjab farmers to diversify their crops and grow less rice.

Kalkat, a tall distinguished Sikh with a flowing gray beard, invited me into his home in a quiet neighborhood of Chandigarh, and served tea and cookies. Long ago, in 1958, he'd earned a doctorate in entomology at Ohio State. Now, in a deep baritone, he described the serious problems facing Punjab's farmers today.

"Sometime in the mid-1990s, the yield of wheat and rice on one hectare came to about 10 tons," said Kalkat, "5.5 tons of paddy, 4.5 tons of wheat. That's when the plateau came in. The inherent potential yield for these crops is 14 tons per hectare per year. Yet the current average is 10 tons for both. It's very difficult to go beyond that. Ten tons of grain, year after year, is mining large amounts of nutrients from the soil. Without large quantities of
fertilizer you would not be able to produce this yield."

Shrinking farm size, Kalkat said, exacerbates the problem. In the 1970s most farmers had about 30 acres of land, and it provided them a certain standard of living. If a farmer has three sons, under the inheritance laws of India he must divide the land among them (not, however, among his daughters). So even if profit per acre has gone up, income per family has gone down as landholdings have shrunk. If the government had invested in rural industries as well as the green revolution, Kalkat believes there would be more jobs for sons off the farm.

"The government is planning to spend billions on the IT industry over the next decade, but not one rupee is going to the rural areas. We must withdraw 40 percent of farmers from the land so the remainder will have viable landholdings, a minimum of 15 acres." Some 60 percent of Punjab farmers own 10 acres or less, he said; 45 percent cultivate less than 5.

It's rare to find someone who has spent a long and successful career in an industry willing to discuss its impacts candidly. Kalkat had spent a lifetime promoting the green revolution both at home and around the globe. Yet after articulating the problems of water shortage and crop diversity, the distinguished entomologist looked at me and said, "The main problem in Punjab is the use of pesticides."

I was stunned to hear an agricultural entomologist complain about insect poisons. Typically, they are the first to rush to the chemicals' defense. If one of the architects of the green revolution had turned against pesticides, then that was truly revolutionary. "Do you think Punjab farmers should go organic then, as Dr. Van-dana Shiva suggests?"

"I'm currently writing a paper on organic farming, on how far it can go," Kalkat said. "I would go organic for two things. Vegetables—we can do that—as well as organic meat, chickens, and eggs with no hormones, antibiotics, or pesticides. That we must do. But it will be very difficult to do for grains," which require fertilizer to sustain the high yields necessary to feed India's 1.3 billion people.

"Ultimately, it's a population problem," Kalkat continued, echoing Borlaug himself. "If India were a country of 700 million instead of 1.3 billion we could do fallowland farming. Dr. Shiva has taken one line and stuck to it. I have strong disagreements with her. India is adding the population of Australia every year. Where will we get the grain to feed them all?"

India's giant neighbor to the north is wrestling with a similar, though slightly different, problem. For the last decade, China has been scouring the globe buying grain not for people, but to feed its exploding population of pigs.