The PM Who Changed History 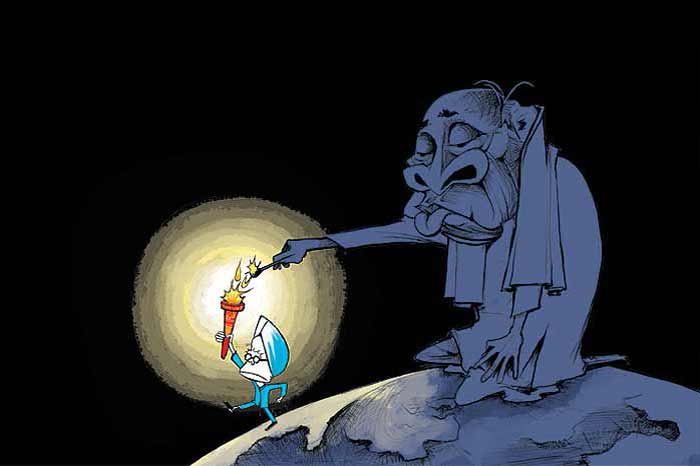 Author and economist, Sanjaya Baru was in prime form when in Hyderabad recently to launch his book 1991: How P V Narasimha Rao made History.

Explaining that the book wasn't a biography of the late prime minister, Baru said that it was about one year in the regime of a PM and of the country when history changed forever.

He spoke about how the Congress "had done its best to wipe out PV Narasimha Rao's memory and contribution" altogether. He said some people in Delhi were taking pot-shots at the sudden influx of books on Narasimha Rao saying that it was south-Indians alone who were interested in him. "The Indian National Congress need not become the preserve of one family. I try to argue PV's side under whom a new post-Nehruvian economic and political policy took shape."

Baru reminded the audience which gathered at Hyderabad's Centre for Economic and Social Studies that in 1984, Rajiv Gandhi has 400 MPs with him. "And yet, he wasted the opportunity. There were no reforms. Similarly, VP Singh's brief reign from 1989-1990, said Baru, was completely forgettable. He said PV was the only Prime Minister who wrote books even after completing his term and while he was in office. Baru talked about how PV Narasimha Rao's April, 1992 address at the AICC convention in Tirupati was completely erased from Congress party records. It was there that PV spoke of the Middle-Way between free-market economics and state socialism, says Baru. In the speech titled, Tasks Ahead, PV had quoted Jawaharlal Nehru, Indira Gandhi and Rajiv Gandhi in support of the policies unveiled by him along with then Finance Minister Manmohan Singh.

Baru also talked about how no political analyst had attempted to analyse the assassinations of Indira and Rajiv Gandhi in October 1984 and May, 1991. "These happened in a short span," said Baru.

Parakala Prabhakar in his speech said that while many liked to portray PV as an indecisive Prime Minister, that was not the case. "Be it in his choice of the Cabinet or be it in appointing Manmohan Singh, the Deputy Chairman of the Planning Commission as a Finance Minister," his signature was evident. Parakala recollected a lunch with PV when he had taken along a friend. When the friend said that his grandfather had been closely acquainted with PV, the latter could recollect every detail though he had lost touch with the family 35 years back. "I am stating this not to demonstrate PV's memory but the fact that he was a people's person," said Parakala.

Former Governor C Rangarajan said that like Nehru, PV was consensual in his approach. Rangarajan who was in the Planning Commission at the time PV was PM said that his greatness lay in the fact that he made economic reforms acceptable to all sections of the Congress. "There was a two-fold strategy in his regime, one of letting the economy grow fast and the other of addressing poverty with well-articulated schemes," said the former Governor.

Congress leaders are wondering why Telangana IT and Municipal Administration Minister K T Rama Rao goes on a selfie overdrive whenever he lands up in the US of A. KTR, who studied and worked in New York, has a fondness for the city. He promptly posts photos of himself walking on the streets of Manhattan. A senior Congress leader sarcastically remarked that KTR never does so in Hyderabad because the rain-battered, pothole-filled roads don't make for great photo ops.

Meanwhile, Telugu Desam leader Ravula Chandrasekhar Reddy has demanded that the TRS government release a white paper on the financial position of Telangana. He accuses the TRS government of not fulfilling its two-bedroom house scheme even after being in power for well over two years. "Chief Minister K Chandrasekhar Rao is dragging his feet on this welfare scheme. But he is spending hundreds of crores on constructing posh houses for himself, the Chief Secretary and the Director General of Police at the expense of the poor," says Ravula. The TD leader feels that the drawing up of new districts was completely unscientific. He ridicules KCR’s rule saying that while KTR was on a visit, daughter Kavitha was in Kuwait, KCR himself spent most of his time at his farmhouse leaving people to their own devices.

The political acrimony between Andhra Pradesh Chief Minister N Chandrababu Naidu and Opposition leader Y S Jaganmohan Reddy has now taken the shape of accusations and counter-accusations on the Income Disclosure Scheme. On the CBDT’s data that Rs 13,000 crore had been declared in both States of Telangana and Andhra Pradesh, Naidu had remarked cheekily that of the Rs 13,000 crore, Rs 10,000 crore had been declared by one individual alone. This, many felt, was an indirect accusation against Jaganmohan Reddy. Naidu also asked Prime Minister Narendra Modi to take steps to demonetise Rs 1,000 and Rs 500 notes as most back money transactions were carried out in these denominations.

An angry Jagan too shot off a letter to the Prime Minister asking how Chandrababu Naidu alone was privy to the information which was not in the public domain. "I want to know how he came to know about it unless that person was his benami." Jagan said that corruption charges against Naidu had touched more than Rs 1.5 crore in his two-and-a-half year rule. "He is probably the only Chief Minister audio and video-taped distributing ill-gotten, unaccounted money involving hundreds of crores of rupees to buy MLAs, and yet even though caught red-handed, mocks us all in democracy by continuing in power without being arrested or resigning," fumes Jagan.

The Opposition leader says that the Centre must make the entire list of IDS-2016 public while initiating an inquiry into the corruption charges against Chandrababu Naidu.