The Olympic Games are a matter of intense national pride for the Chinese people. We should refrain from any action which might hurt their pride. "The Chinese were also worried that if the saffron revolution succeeded in Myanmar, it could next spread to Tibet........
Sections of Burmese political exiles have been advocating that the US should also use the Beijing Olympics for keeping up pressure on China to make the Junta change its policies. Non-governmental elements in the US and West Europe have already been linking the human rights issue in Darfur in the Sudan and Tibet to the Olympics. They want that the issue of Chinese support to the Myanmar Junta should also be linked. They feel that while a call for the boycott of the Olympics by the participating Western countries would not work, a call for the boycott of the Olympics by the Western media in protest against Chinese policies in respect of Darfur, Tibet and Myanmar might. They want that even if the Western media is disinclined to boycott the Olympics, it could at least down-grade the coverage of the Olympics. These Myanmar exiles are also considering the issue of an appeal to foreign tourists not to go to Beijing to watch the games."

Intelligence agencies in China, India, Nepal and other countries seem to have been taken by surprise by the simultaneous protests launched by Tibetans, not only in India, Nepal and the rest of the world wherever there is a Tibetan diaspora, but also in Tibet itself over the continued violation of the human rights of the Tibetans by China. The protest demonstrations broke out on the 49th anniversary of the collapse of the Khampa revolt of March 10, 1959, which resulted in the flight of the Dalai Lama to India from Tibet. 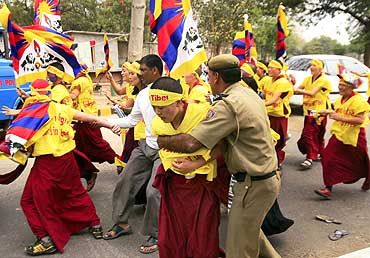 One of the objectives of the demonstrators is to draw attention to the human rights situation in Tibet as the organisers of the Beijing Olympics are getting ready for taking the Olympic flame from Athens across the countries on the ancient Silk Route. The flame is scheduled to pass through Islamabad and New Delhi on April 16 and 17, 2008. The Chinese also propose to take it to the top of the Mount Everest to highlight their professed pacification of Tibet and its economic and social development. The Tibetans are determined to disprove Chinese claims of having pacified Tibet by organising a series of demonstrations and protest rallies all over the world in the period preceding the Olympics.

While some form of Tibetan activism in the months preceding the Olympics was expected and the Chinese were mentally prepared for it, the widespread manifestations of this activism has been a matter of surprise. Of greater surprise and concern to the Chinese was the outbreak of demonstrations and rallies by Tibetan monks in Lhasa, who have been out in the streets for the last three days, trying to march to the old Potala Palace of the Dalai Lama. The Chinese Police have repeatedly used tear gas to prevent their march. The demonstrations by the monks and others in Lhasa--synchronised with the demonstrations in other countries, where there is a Tibetan diaspora, including India--- indicate strongly that these demonstrations are only partly spontaneous. There is also an element of orchestration by the Tibetans abroad with the help of the human rights groups in the West, which have been wanting to use Tibet as one of the issues to beat the Chinese with in the year of the Olympics.

Interestingly, the news of the demonstrations in Lhasa was first broken by Radio Free Asia, the CIA-funded radio station, which was started under the Clinton Administration, to use against China, North Korea and Myanmar PSYWAR methods similar to those used against the USSR and other Communist countries of East Europe by the CIA-funded Radio Free Europe and Radio Liberty in Munich. After the collapse of the Communist regimes in East Europe, Radio Free Europe started functioning in Asia under the name Radio Free Asia. Radio Liberty was shifted to Prague to carry on PSYWAR against Russia and Iran. While Radio Liberty played an active role in fomenting anti-Russia agitations in Ukraine, it has not been that successful against Iran so far. Radio Free Asia, which provided PSYWAR support to the monks and students of Myanmar during their agitation against the miluitary junta last year, is now providing similar PSYWAR support to the Tibetans agitating in Tibet and elsewhere.

In India, the response to this campaign has taken the form of an announced march by a group of about 100 Tibetans from Dharamsala, the headquarters of the Dalai Lama, to Tibet. The government of India has done well to ban this march, but despite this, the Tibetans are likely to create difficulties during the passage of the Olympic flame through Delhi. The Chinese were originally planning to invite some foreign tourists to Tibet to witness the flame being carried to the top of the Everest, but they have now given up the idea and banned the visit of foreign tourists to the foothills of the Everest on their side till the flame was taken up and brought back and taken out of Tibet by Chinese mountaineers.

I have been a strong critic of the govt. of India's recognising Tibet as an integral part of China without insisting on a quid pro quo in the form of the Chinese recognising Arunachal Pradesh as an integral part of India. I have been a great admirer of the Dalai Lama and the Tibetans and a supporter of their human rights. I have also been a strong critic of the Chinese action in imprisoning the Panchen Lama duly appointed by the Dalai Lama in accordance with the Tibetan traditions and replacing him with a bogus Panchen Lama named by the Communist Party. At the same time, I have been of the view that we should not do anything, which might create even the slightest suspicion that our Tibetan policy is influenced by US ideas and machinations. It should be our policy influenced solely by our interests and not by US interests.

There is a complex Great Game on the horizon as the Beijing Olympics approach. While the US State Department has toned down the criticism of the human rights situation in China in its annual report on the State of Human Rights in the world, the non-governmental organisations in the US have stepped up their demonisation of China on this issue. If the US is prepared to use the Olympics card against China, Beijing is prepared to play the North Korean nuclear card and the Myanmar card against the US. After being co-operative in the six-party talks on the nuclear issue, Noth Korea has changed gears and is delaying the fulfillment of its commitment to share information about its nuclear capabilities. After showing some flexibility last year and receptivity to international concerns, the military junta in Myanmar is again back to its old game of rejecting international concerns with scorn. North Korea and Myanmar would not have reverted back to their rigid positions without a nod from Beijing. China feels its policy activism on North Korea and Myanmar to meet US concerns has not had a quid pro quo from the US in the form of discouraging the attempts mounted from US soil to politicise the Games and create an embarrassment for the Chinese leadership not only in the eyes of the international community, but also in the eyes of its own people.

India should keep out of this Great Game. The Olympic Games are a matter of intense national pride for the Chinese people. We should refrain from any action which might hurt their pride. The Dalai Lama must be advised to cool it and not to give the impression of letting himself be used by anti-China elements in the US. The Tibetans should not be allowed to disrupt the passage of the Olympic flame through New Delhi.