The Problem With The Gujarat Model

Why is the Patel agitation not happening in the rest of India, particularly our cities where there were such protests 25 years ago? 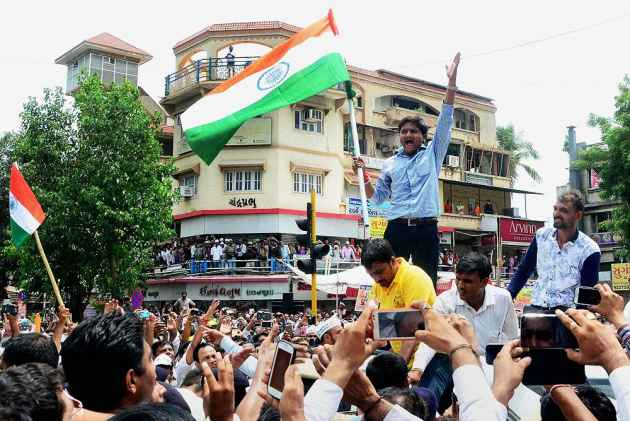 I have two questions for those of you who have been observing the agitation of the Patels in Gujarat.

First: Why is this not happening in the rest of India, particularly our cities where there were such protests 25 years ago?

Two: If it did happen in Mumbai and Delhi and Bangalore, what language would the protestors against reservations speak in?

The Patels have two demands: give us reservations or remove reservations entirely. This second aspect is a middle class, urban demand and has been for around for as long as I can remember. So why is the fire not spreading if lakhs of people are rallying in Gujarat's cities around the Patel cause? We'll come to that in a moment.

"?India's share of services is 59% of gross domestic product (GDP). In Gujarat, services is only 46% of GDP, 13% less than the national average. The share of industry is higher in Gujarat (41%, compared to just under 30% nationally) but this has always been the case. Gujarat produces first-rate industrialists with the same fecundity as Bengal produces artists. That was never wanting. What was ??missing from Gujarat was the new economy money, billions of dollars the rest of urban India is taking from the West.?"
?
??Consultancy firm KPMG analysed why information technology (IT) and IT-enabled services (ITeS), which is bread and butter for Indian cities, were absent from Gujarat.

This was puzzling because "Gujarat offers relatively lower cost of operations, due to lower cost of real estate and lower compensation level". Modi had also addressed the problem specifically.

"Some of the policy initiatives include: a) Stamp duty waiver for IT park developer and concession for IT-ITeS units, b) Development of special economic zones, which provides various financial incentives, c) Exemptions from payment of electricity duty for five years from commencement of operations, d) Exemptions from power cuts, and e) Simplification in labor laws."

Here you have the answer to both the questions that I asked at the beginning.

The reason the protests are not happening in Mumbai, Bangalore, Chennai, Hyderabad, Gurgaon and Noida is that there are options available to the youth in those cities. They can access white collar jobs with relative ease. Unlike the protesters of 25 years ago, there are many more jobs in the private sector available to these people.

This week I was at a meeting in my office and we were discussing the salaries of IT professionals. It turns out that the most basic, entry level jobs, requiring only working knowledge of a computer, paid Rs 30,000 a month. And it is not?? easy to find people to do this because demand is so high.

And many people can access this sort of job because most of them are armed with English, integrating them into the global economy. This is something not available to most youth in Gujarat (the government schools do not teach English till Class V).

Gujarat is India's most urbanised state with two of the nation's top 10 cities. However the protests are raging in Ahmedabad and in Surat.

On a television debate I was on, it was pointed out to me that some other states, notably Bengal, also have or had the no-English policy. However, Calcutta is a net exporter of talent and it is the rare white collar organisation which does not sport Bengalis in its management. Why? Because the long British presence there ensured that quality schools sprang up all over Calcutta.

Even when the state government changed things around, this infrastructure kept doing what it was meant to do. This was not the case in Gujarat.

The agitations over implementing the Mandal Commission report and liberalisation happened around the same time in India.

The agitation in Gujarat is a throwback to the events of 25 years ago. We must ask ourselves why is it that things have remained more or less where they were so far as the agitators are concerned while their fellow Indians in other cities have moved on.