The Racial Slur That Wasn't

Ten observations on the monkey business of racism--notwithstanding the fact that it is far from certain that Harbhajan Singh did actually call Andrew Symonds a monkey. 1) It is ironic that the first charge of racism brought under the ICC code has been slapped on a man from a minority community in a brown country. And that the complaint was lodged by the white captain of an overwhelmingly white team from a country with a very troubling record of pervasive racism. That the said team practically invented what has euphemistically come to be known as sledging and that a recent former member of this team was involved in an overtly racial incident with his Sri Lankan opponents makes the irony richer.

2) This is from the "Say What?!!" department. The match referee Mike Procter, a white South African, proclaimed: "I am South African, and I understand the word 'racism'. I have lived with it for much of my life." Yes Mike, you have, but you were privileged under that system. How can that make you "understand" what it is like to be on the receiving end of it? Do those living in multi-crore mansions understand what it like to be poverty-stricken simply because they employ a poorly paid servant or live next to a slum? 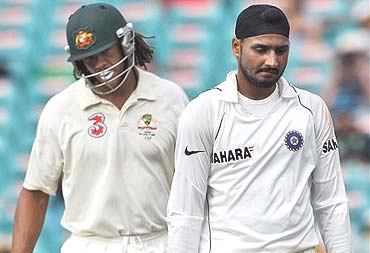 3) We will probably never know whether Harbhajan Singh called Andrew Symonds a monkey (most Indians don't find it implausible that the Aussies could have cooked it up), but IF he did, it is inconceivable that he could have done it innocently. Symonds had been treated to monkey chants while touring India earlier, and the Indian team, including Harbhajan, had been made aware that "monkey" was a slur when used against a person of colour in Australia.

4) The monkey chants directed by Indian spectators at Symonds are surely a learned behavior. It is a distasteful page plucked out from the playbook of boorish European, especially Spanish, fans who greet black football players with this form of chanting while waving neo-Nazi banners and shouting at them to "Go back to Africa." But the association of "monkey" with black Africans goes much further back. I can recollect hearing people refer to them as "langoors" ever since I was a child. 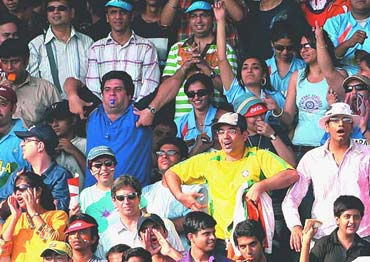 5) I am not buying the wide-eyed innocence of many Indian fans who appear puzzled that monkey is being seen as a racist slur, particularly of the Sydney-based United Indian Association (UIA) which has apparently expressed surprise that their fellow Australians are taking umbrage at the term. Its president, Raj Natarajan, issued a statement saying that "Considering that the Monkey God is one of the revered idols of Hindu mythology and worshipped by millions, it is surprising it was considered a racist term." The UIA is either being disingenuous or has its head firmly stuck in the sand; its members live in Australia and pay some attention to the local discourse, don't they? Besides, if Harbhajan did call Symonds a monkey, I doubt that he was deifying him.

6) Let me say it. The term "monkey" when directed at a black/brown person is racist. The history of colonial racism is filled with the attempts of white rulers to depict the denizens of their black/brown colonies as savages, animals, undeveloped human beings, and unevolved… monkeys. The term in its various forms has been used by white racists to refer to people of colour. Monkey, ghetto monkey, porch monkey, tree swingers, simians, and shit slingers are slurs that have a long and distressing history. We forget it at our own peril.

7) Why exactly are we so outraged that someone could possibly level the charge of racism at us? After all, we practice our own forms of discrimination on the basis of caste, religion, occupation, language, region etc. The term "racist" may be unfamiliar in our context, but the workings of racism aren't. Bigotry and intolerance against a group of people based upon their inherited identities isn't exactly something that only happens elsewhere. Notions of the intrinsic superiority of one set of people over another and a resultant prejudice towards the latter aren't alien to our social landscape.

8) We are also fairly adept at buying into a racist structure when we move abroad. The conversations about African Americans in the homes of the U.S. NRIs distressingly echo the views of racist white Americans. Even before entering the U.S., Indian immigrants are armed with the 'knowledge' that blacks are lazy, untrustworthy, and dangerous. These immigrants may have white friends, but seldom interact with the black community. They may transgress cultural boundaries by marrying whites, but almost never by coupling up with an African American. They even have their own version of the 'nigger' epithet: kallu.

9) In this whole sordid issue, what got the raw end of the deal was the issue of racism itself. Once again, it has been boiled down to the actions or attitudes of one person against another. Racism however, not unlike poverty, is a structural problem. Structurally racist systems are configured to perpetuate inequalities. Notwithstanding the 40-odd years since the passage of the Civil Rights Act and the end of Jim Crow laws in the U.S., the discrepancies between whites and blacks on income, wealth, health, education, rates of incarceration and other economic and social indicators continue to be vast. It is the reductive understanding of racism as a mere individual act that gives us the comical spectacle of white umpire Darrell Hair suing the ICC for racial discrimination.

10) Sitting U.S. Senator George Allen of Virginia was giving his stump speech in 2006 when he noticed a staffer from the opposition camp taping him, and paused to ask his audience to "give a welcome to macaca here". Macaca, a word for the rhesus monkey, is a slur used by Francophone whites against the local blacks in Africa and it was speculated that Senator Allen had learned it from his mother, a Tunisian of French descent. The staffer, the only person of colour in the gathering, was S.R. Siddarth, an Indian-American. The same system of racial discrimination that allows us to feel superior to blacks and call them monkeys makes monkeys of us too.

Mir Ali Husain is the co-author of Anthems of Resistance: A Celebration of Progressive Urdu Poetry and the lyricist of Dor and Bombay to Bangkok