This is perhaps one of the best times to walk through the labyrinth of lanes and by-lanes in Old Delhi and gorge to the heart's content. 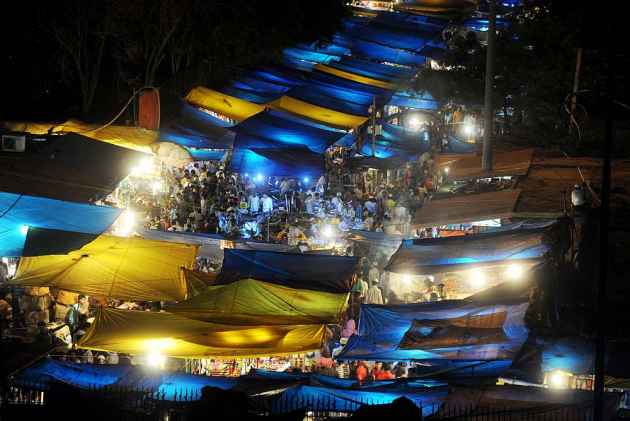 It's past midnight on a Monday but the lanes of Puraani Dilli are choc-a-block with people as if it were only just 8 in the evening. This is the last night of Ramazaan before it's Eid. There isn't a shop in sight that is closed. Eager vendors displaying their goods call out to shoppers jostling and elbowing their way through, slipping into tiny hotels that line the maze of gullies that surround Jama Masjid.

The masjid itself is plunged in darkness — the Eid lights aren't on at night, an apparent attempt at saving electricity — but the world around it is dressed in festive zari that hangs overhead and strings of bulbs. One hardly notices the looming mosque amidst the bustle.

Being a Ghalib fan and a lover of food, I am no stranger to Puraani Dilli or its cuisine and Ramzaan is perhaps one of the best times to walk through the labyrinth of lanes and by-lanes and gorge to the heart's content. Of course, one would have to battle the crowds, wipe enormous amounts of sweat, walk quite a bit and save one's feet from getting run over by bikes but at the end one realises that it was all worth it.

Right outside Jama Masjid's Gate Number 1, are a string of makeshift shops that sell tikkas, kebabs and other fried goodies. Pieces of meat on iron skewers roast on a slow fire, embers flying, their delicious aroma seducing everyone that passes by. I picked the one that has a place to sit and ordered malaai chicken tikka — something that is often eaten except that I can guarantee that no one has ever tasted this absolutely divine version of it. It arrived floating in a pool of melted butter and a heap of onions and rumaali roti. I made a conscious choice to not stuff myself. I had tonnes to eat before I left.

Next on my 'to-eat' list was Nihari, a stew consisting of slow cooked meat usually garnished with cooked bheja (brain) or nalli (bone marrow). Most restaurants start serving this right after the Maghrib prayers which take place at around 7.20 PM and most of these places run out of it by dinner time since it's so much in demand. I am not someone to give up easily and I ended up eating at this little place called al-Hilal that had just brought out its second vat of the delicacy.

Bakeries line the alley right opposite Jama Masjid and they bake special bread stuffed with dry fruits during Ramzaan. I don't know anyone who can resist the smell of fresh baking. Needless to say, I got carried away and bought myself some.

Other than the huge piles of sewai which are a common sight during this month, there are numerous shops that sell dates of different varieties. Dates are an integral part of fasting because every evening during Iftaar, Muslims break their fast by eating dates, much like the Prophet used to. Other than that, there are shops that sell all kinds of dry fruits one can possibly imagine, some of which go into making sewai, which again is made in every Muslim home for the Eid-ul-Fitr feast.

One thing that is only found in the Jama Masjid area and that I often find myself dreaming about is the shahi tukdaa. Right next to the Ghareeb Nawaz guest house, a man stands with a large circular tray of it. One layer of sweet brown bread fried in ghee and soaked in milk covered with a thick white layer of milk cream — this one is to die for. It is available round the year and is a must for anyone with a sweet tooth.

This same guy also serves dollops of the most heavenly mango ice cream in the world. Apparently the ice cream is home-made and he uses absolutely no artificial flavours. He sells the ice cream 365 days too but he warns that during non-mango season it might not taste as good. And just in case, you are tired from all the walking, a glass of khajoor (dates) shake is an instant pick me up.

Before leaving I treated myself to a glass of special chai and while I sat wondering what was so special about it, my mind pondered over other things. Warmth — one of Delhi's most redeeming qualities is found in its most crowded, most neglected locales. It is what made me call it home in the first place over all other Indian cities. That and good food.

The auto ride back home is worth mentioning. The gentleman driving me home turned out to be of a religious disposition. He complained about how despondent the Muslim community has become these days and how it needs to follow the perfect example set by the Prophet, Muhammad. He slammed the politicians and the Hindutva wallahs, complained of discrimination against the minorities, proclaimed his own nationalistic fervour and related how his brother was killed during the riots that followed the demolition of the Babri Masjid in 1992. He also encouraged me to read and learn about Islam so that I may see for myself how perfect it is. I wanted to tell him that I did my post graduation in Islamic Studies but I let him be. Perhaps there was no better way to end a Ramzaan-special visit to Puraani Dilli.