Arjuna learns that exercise is a valid form of worship 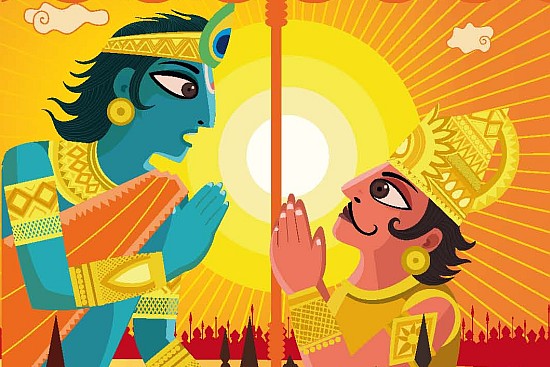 Arjuna started guiltily. If Krishna was really God, and he had known it, he really should have been treating him with a lot more devotion, a lot more respect. Instead, he had been disagreeing with him, arguing with him, asking him to explain himself . . . What was wrong with him? 'Don't be so hard on yourself,' said the voice soothingly, 'It is Krishna himself who makes you forget, so that you are not overwhelmed by his glory, so that you can be his friend. That's how much he loves you.'

The voice faded away. Arjuna tried to recall what it had said, because something told him it was desperately important, but strangely, no matter how hard he tried, he could not remember a single word.

Shaking his head irritably, Arjuna forced himself to focus.

'Men take different roads to come to me, Arjuna,’' Krishna was saying, 'and I accept all of them. Whatever work each may do – whether it is scholarly study and meditation, which the thinkers do, whether it is raising arms against injustice like the men of action do, whether it is doing business like the traders, whether it is tilling the fields and taking care of the cattle as the farmers and cowherds do – the work itself does not affect me, and I accept it all in the same spirit, as long as the action is right.'

'But what is "right" action, Krishna? How will I know if my action is right?'

'I've said it before, Arjuna, and I say it again to you: If you perform your action simply because it needs to be done, without desire for reward, without fear of consequence, if you offer your action to me as a sacrifice, if you are free of jealousy when you act, if you remain the same whether your action brings you success or failure, that is right action, whatever that action may be.'

Arjuna shook his head, puzzled. 'Offer my action as a sacrifice? What does that even mean, Krishna?'

'Different people offer different actions to me as a sacrifice,' said Krishna. 'Some withdraw from the world – they shut their eyes and ears, and sacrifice the pleasures of the senses. Some embrace the world – they see everything around them as a gift of the Universe and enjoy it in the right spirit, claiming nothing for themselves – that is their sacrifice. Others fast, sacrificing their hunger; or exercise, sacrificing their comfort. Still others practise breath control, sacrificing their most important life force, the breath itself. And then there are some who offer a combination of all these to discipline their bodies and control their minds.

'All these people practise self-discipline and sacrifice; that is how they worship me, and I accept it all. They understand that true sacrifice does not mean the offering of things – money, possessions, gold – but the offering of themselves – their pleasure, their pain, their desire, their anger. They have complete faith in me, in the idea that self-discipline brings true wisdom, which brings in its wake true happiness.

'But he who offers no sacrifice at all,' Krishna went on, his voice growing stern, 'who does not believe in anything, who practises no self-control but does exactly what he likes at all times, there is no wisdom for him, and therefore no happiness, in this world or any other.'

Arjuna nodded. Discipline was the soldier's credo, and no one knew better than he just how vital it was to victory. But did it bring wisdom? Or happiness? He wasn't so sure.

'So I say to you, Dhananjaya,’' said Krishna, 'have faith in the rightness of the action you are about to perform. Sacrifice your doubts and your grief to me. Know that it is your inaction, and not your action, that will make you a sinner.

'Stand up, O Bharata, and draw your bowstring!'

Lessons from the Gita

If you think about it, anyone who has achieved anything in this world has done so because she had faith, because she believed – in an idea, in God, in herself, or in all of them.

Madame Curie believed implicitly that even though a mineral called pitchblende was mostly made up of uranium, there was a tiny amount of something else in there too. It took her 15 years of tireless work, which included grinding down about a ton of pitchblende, to figure out how to separate the 'something else' – which she named Radium – and prove to the world that her hunch had been right.

Young Albanian nun Sister Teresa was headmistress in a school in Kolkata where she had worked for 20 years when she got 'the call within the call' – God, she would say later, had ordered her to leave the convent and help the poor while living among them. She followed the order, even though she was plagued by doubt about her decision and was even reduced to begging for food in the first year. She went on to start the Missionaries of Charity, whose mission was to serve the 'poorest of the poor'. Thirty years later, the world recognized her years of selfless service to the poor by awarding her the Nobel Peace Prize.

More recently, author Joanne K. (you know, J.K.) Rowling believed so much that children would enjoy her story about a boy wizard that she never stopped sending it out to publishers. Seventeen publishers returned the manuscript, saying they didn't think it was good enough. The eighteenth one agreed to take a chance on her. Today, Harry Potter is one of the most famous and popular fictional characters in the world.

Of course, just having faith isn't enough. You should also be prepared to back the faith up with tons of hard work. You need to be able to make all the sacrifices it takes, and yes, you need to be able to do your work 'with no expectation of reward'. If you think you want to be a writer some day, for instance, you will have to write, and write, and write, always focusing on the job at hand, but never neglecting your primary duty as a student, which is working at your lessons.

Such an effort will need everything that Krishna says it will – self-discipline (it is so much easier to watch TV when you have a free afternoon than to sit down and write something), many sacrifices (if you haven't done your quota of writing for the week, you will have to be prepared to skip that movie you had planned with your friends or wake up really early on Sunday morning to finish the writing), and, of course, a lot of faith.

If you manage to do all that, though, wisdom is guaranteed. Maybe you will realize, after six months of being super-disciplined about writing, that writing isn't for you. Maybe you will discover how much you love it and become even surer that that's what you want to do in life. Either way, never again will you have to wonder whether writing is for you or not, no matter what anyone says. In other words, there is no more doubt, or fear. And if that isn't a recipe for happiness, what is?

Excerpted with permission from The Gita for Children by Roopa Pai, Hachette India.