The Sad, Curious Case Of KP

Pietersen may never have been the most popular of players in any dressing room but never ever has he betrayed his adopted country on the field. 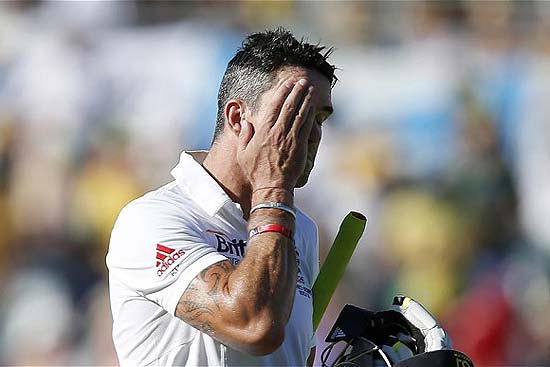 The English cricket authorities have a tendency to be extremely rigid about selection of the players. In the past they have dropped the seemingly undroppable stalwarts like Geoffery Boycott and Ian Botham, to name only two, on disciplinary grounds and they continue to do so. But sometimes their rigidity goes a bit too far and costs England dearly as they are seldom or never ready to compromise or forgive the erring players.

Kevin Pietersen, indisputably the finest but most controversial England batsman of the 21st century, who has scored 8,181 runs at 47.28 in 104 Tests, in addition to making 4,440 runs at 40.73 in 136 ODIs, has been sacked for non-cricketing reasons since the 5-0 Ashes whitewash defeat down under early in 2014. He is still two months shy of his 35th birthday, fit as a fiddle and in the mid-season form. He had reasons for hoping to return to the England dressing room for the Ashes series in July.

He stacked his claim with a career-best 355 not out (396 balls, 36 fours, 15 sixes) for Surrey against Leicestershire at Kennington Oval in London this week. Though the innings kept the Fleet Street busy with several British newspapers suggesting in editorials that Pietersen should be recalled, it failed to impress the greybeards of England and Wales Cricket Board (ECB), who dashed all his hopes.

Trust — that invisible thread which binds colleagues to one another in a team sport like cricket — is what Pietersen has lost, according to Andrew Strauss, the new director of England cricket. "He has been a phenomenal player for a long period of time. It's not about his ability as a player. It's about trust. You can't build that over a few days," declared Strauss in no uncertain terms immediately after taking over from the axed Peter Moores.

With Strauss firmly in the saddle and making such a statement pregnant with meanings, there are indications that chances of revival of the South Africa-born batsman's England career are very slim. Pietersen and Strauss have shared the England dressing room for a long time but have also had something of a chequered history.

The rift between them came in open in 2012 when Pietersen sent provocative text messages to South African opponents, allegedly Dale Steyn and AB de Villiers, that apparently belittled captain Strauss and coach Andy Flower. He even hinted at "feeling suffocated" in the England dressing room. Pietersen was duly punished and dropped for the crucial third and final Test at Lord's.

Two years later, in July 2014 to be precise, Pietersen had his revenge, as it were, when Strauss was forced to issue an apology after being caught on microphone making derogatory remarks about the swashbuckling batsman while donning the hat of a commentator on Sky television.

Though Pietersen has had many sympathisers, he has himself to blame for his plight. Known for his frequent spells of antics, Pietersen and controversies seem to have forged a lasting bond. Ignored by South Africa, he began striding like a colossus on the playing fields of the world after arriving in England in 2001. In his first 30 Tests, he had scored 2,898 runs at 52.69, including 10 centuries and 10 fifties. Around the same time he had made 2,068 runs at 53.02, with 5 hundreds and 14 half-centuries, in 54 ODIs.

He kept scaling dizzier peaks of success with his mercurial batsmanship. But there had been a growing feeling that he was considering himself superior to his colleagues and taking them for granted, both while playing for England and for different counties. While most of them had a professional admiration for Pietersen, it was obvious that their feelings fell a long way short of personal warmth.

His detractors began to suspect that for all his talents and achievements Pietersen had put on the England cap along with a mask all those years. After the text messaging controversy they were convinced that the mask had fallen regardless of the Union Jack he had tattooed on his arms. Why, his very loyalty to England was being questioned.

Pietersen should have learnt something from Basil D'Oliveira, the black South African who represented England with exemplary loyalty and dedication. The whole of England was proud of this gifted all-rounder. D'Oliveira was a member of the England team that was scheduled to tour South Africa in 1968-69. But when the South African government refused to allow entry to D'Oliveira in the rainbow nation, the English authorities cancelled the entire tour. (Nemesis fell, international sanctions were slapped and South Africa was isolated from the world for well over two decades.)

Pietersen could no longer take his place in the England team for granted after hitting his own leg with the proverbial axe. He also began to realise that he was not indispensable. Expectedly, there was no room for him in the England team for the recent World Cup in the Antipodes despite vociferous cries for his inclusion. These cries reached a crescendo after England's disastrous performance and there was a glimmer of hope for Pietersen to stage a comeback.

But Strauss has stressed the trust issue now and made it all the more difficult for Pietersen. Trust and mistrust are big issues and open for debates. Peter Trego put it succinctly the other day. "Has 'trust' ever won a game of cricket?" asked the Somerset allrounder. "I thought it was runs and wickets. Is there a new World Cup of trust England are hoping to win?" The fact is players brought together for the purpose of sport do not necessarily have to be the best of friends. There are not even in the army on the war-front. But they must share a common aim and objective.

Pietersen may never have been the most popular of players in any dressing room. He may not have many pals among his England and county colleagues. He may have felt "suffocated" with some of his England colleagues. But never ever has he betrayed his adopted country on the field, and always tried to give his very best, even when playing against South Africa.

He has still a lot to offer to England. He is at an age when a class batsman is usually at the pinnacle of his prowess. And Pietersen is in a class of his own. He appears to have mellowed considerably and is desperate to play for England again. He has already been punished a lot. He deserves one last chance to prove his worth all over again.

England is not a strong team, certainly in batting, to afford to leave out someone like Pietersen. There is no need to emphasise the importance of Ashes for true cricket lovers in England. English cricket is in shambles and only an Ashes triumph in the summer can bring the smiles back on the fans' faces.

The ECB, which includes Strauss, know full well how powerful the Australian team is. They also know what Pietersen is capable of doing when armed with a willow and wearing an England jersey. It is a deadly cocktail of their own ego, hypocrisy and vanity that prevents them from playing Pietersen again. The ECB must shed their ego for the sake of country and also give some thought to what the people of England want to see. England must make the most of Pietersen's hunger.

But, rigid as they are, the English cricket authorities are unlikely to change their stand on Pietersen.

Sealed With A Kiss