He won't be lamented, but he'll not be forgotten – a nightmare to the new-ball bowlers, a batsman-sledger, a man who hit the ball as hard as Lloyd. A great batsman who toughened in adversity, the man who batted the longest in the nets, and whose conf So Matthew Hayden has announced his retirement from international cricket.

He's been called much – "sanctimonious bully" sticks to the mind – but more than anything else, Matthew Hayden was a massive presence -- literally. In another era, fast bowlers were deemed intimidating but Hayden, for a large part of his 103 Test matches, gave us a show of intimidatory batting. He was perhaps the most scary batsman of all time; changes in the game – in rules, protective gear, advent of covered pitches – have ensured that modern batsmen bully bowlers like never before. And Hayden was the greatest bully of them all.

Swivelling his arms and brandishing his bat, stretching his neck, high-stepping to the middle, Hayden would enter the ground just the way a boxer enters the arena, prepared to hit and get hit, draw blood and shed blood. Not the most charming of batsmen or cricketers, Hayden perhaps played the wrong sport, for he seemed to possess the mind of a boxer or a wrestler. Come to think of it, didn't he once seek a boxing fight with – of all people! – Ishant Sharma?

But it would be incorrect to believe that Hayden was all physique and little else; he must have possessed a mind of flint, to be dropped early, be ridiculed, and then to come back into an Australian team packed with mighty cricketers who were near impossible to shift. The comeback happened in India; I remember watching that 119 from the stands just outside the press box at the Wankhede Stadium in Mumbai. India were bowled out for 176 but had visions of taking the lead when Australia got down to 99 for five. Then came the two most incredible hours of cricket you could hope to see – for Hayden was joined by Adam Gilchrist and the two smashed nearly 200 runs in 30-odd overs. India lost in three days, for the two had changed the game. These two, and several other Aussies, continued to do that through the 2000s. 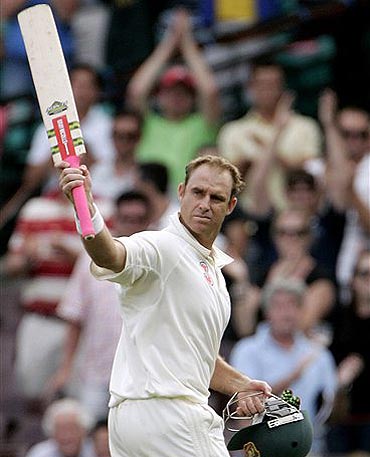 Nothing can be taken away from the way Hayden batted, but there's a reason why he turned out to be the most intimidating batsman of all time; in the 1980s, you had five-odd players averaging in the 50s – folks like Richards, Gavaskar, Miandad, Border and Greg Chappell. Another brutal left-hander, Lloyd, didn't make it; neither did players like Crowe, Gower, Gooch, and Zaheer Abbas.

Contrast that with the current times – there are three with 50-plus average in the current Indian team alone. In the last South Africa-Australia Test, there were five batsmen who averaged over 50 (a sixth too, Duminy, but he's played only three Tests) and one just a shade below that mark. Why is it so? The answer lies in the quality of the modern fast bowlers (and the fact the rules are bent to their detriment) and spinners, and less fearful pitches. Possibly the batsmen have become more inventive and have developed greater skills, but it can be accepted that several front-foot batsmen wouldn't have been very comfortable against pacemen from the 1970s and 1980s. Even Hayden.

But that doesn't alter the fact that Hayden is Australia's most successful Test opener. It's not his fault he didn't face Marshall or Roberts or Imran or Hadlee; and great players will be great in every era.

Recently, he's tried to hit out of trouble (Mohali, second innings) but failed; he's tried to grind it out but (Sydney) but failed. Age and injury inhibited Hayden, and he's had some bad decisions during his bad run. Perhaps playing against real quality seamers/pacemen (Zaheer at the top of his game, and Ishant and Steyn and Ntini) has also been a factor.

The one objection against Hayden is that he's so wholeheartedly disliked, a pious man given to horrible profanity. "Have you been sledged by Hayden," a cricketer reporter likes to joke. "No? You must be part of a very small minority!"

"Don't care whether you love me so long you fear me," Hayden seemed to believe.

Indeed, arrogance bordering on obnoxiousness seems to be considered central to sporting success at the international level now; that was true for other sports before cricket, but the Australians over the last two decades seem to have institutionalised this in this sport.

Hayden won't be lamented, but he'll not be forgotten – a nightmare to the new-ball bowlers, a batsman-sledger, a man who hit the ball as hard as Lloyd. A great batsman who toughened in adversity, the man who batted the longest in the nets, and whose confidence/arrogance became part of why he was so successful.