The Strange Case Of Sodi Sambo

Or was her name was something else? Perhaps she was called Gambo, Dhomla or Gantela Baby? Does it matter? Think of her as some Adivasi woman. Any name would do. They are barely human anyway. 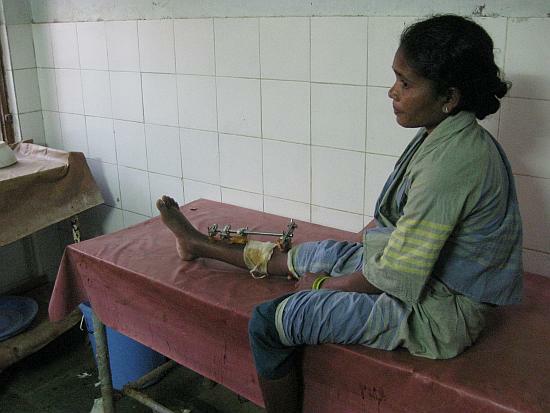 “Is there any point to which you would wish to draw my attention?"

"To the curious incident of the dog in the night-time."

"The dog did nothing in the night-time."

"That was the curious incident," remarked Sherlock Holmes.

I first met Sodi Sambo on the train to Araku Valley. The train, Kirandul express, would be heading after stopping at Araku into the deep interior of Chhattisgarh, to that city in the far beyond called Dantewada.

Or was her name was something else? Perhaps she was called Gambo, Dhomla or Gantela Baby? Like the way SP Dantewada, Amresh Mishra, explained while waving his hand when talking about the mysterious “relatives” who were the new protectors of Sambo. Parent, guardian, mousa, mousi. Does it matter? Think of her as some Adivasi woman. Any name would do. They are barely human anyway.

She was standing quietly by the bathroom door. Her scared eyes were not looking at anything in particular, perhaps they were vaguely looking out through the open carriage door, as the train swerved around the curve of the beautiful mountainside that was covered with the dense forest. Perhaps she was thinking, about home, when she might at last get there.

Get home from this whole alien world that she had to take a trip in. In the middle of a whole train load of city people, who were out on their Christmas holiday, going to the Araku Valley, a popular tourist destination. People from whom she was clearly different. The quiet oval face, the brown wrinkled skin, the simple red bordered green sari worn in a manner quite distinctive, the unadorned bare feet. And the timid, innocent look. I am quite sure she had a ticket, like myself and everyone else, yet she would not even dream of taking a seat in the middle of the far more polished city people, in the middle of the coach. She was just grateful that nobody had objected her sharing the ride; that was more than she could ask for.

The same grateful look in Sambo's face when she was being attended to in the hospital in Dantewada, to treat her shattered leg. The averted eye, the humble acceptance of fate, the gratitude of the kindness and care.

Just let me be, I am human like you. That is all that I ask, I will not come in your way.

But you do come in my way.

You need not come to me any more. I will come to you. You cannot avoid the big world outside any more. It has come to you now. Even in the form of a CRPF jawan who has shot you after lining you up against the mud wall of your own house. Change has come and now you have to accept it.

And the jawan let you live, did he not? Perhaps, some hidden human instinct, stayed his hand, and he could not kill you outright? Or finish the task, when your howling babies threw themselves over your bleeding, fallen body? Some stupid inefficient worthless jawan, who perhaps does not fully believe in development?

Someone who still has not realised that both you and and the developed world cannot coexist? That man needs to be shot himself!

Certainly not the Chhattisgarh police. Look at SP Dantewada, Amresh Mishra. Such a nice man. How he had kindly offered to listen to your troubles. Take down your statement. That too in person. Such a kind and considerate man. They are there to protect you. their leader, good old Vishwarajan, had even explained to me that police in Chhattisgarh do not even beat up anybody, and people can safely give their statements in a court in front of a magistrate. No, it certainly cannot be those benevolent people.

What about the CRPF? The military?

Well, that is a different story. But still, why would they. Unless, of course, you were a Naxal? You have at least seen a rifle, have you not?

Still, it seems less likely. Naxals do not have crying children to protect them at the moment when they might be killed. Nobody seems to have disputed that part.

And no matter how hard one can try to imagine, you just do not look like one of them.

Besides, they are here to protect the peace, just like the hard working state police.

What about the SPOs?

Well, that could have happened. But look at them. They protest non-violently, and only fight in self-defense. Like the way they protested against the troublesome Himanshu Kumar. Mr. Mishra himself had to lathi-charge the unruly SPOs away, as they were getting out of control. And shooting? That is not what they do. After all, they are only tribals armed with bows and arrows, well, some with rifles. To protect themselves from the Naxal terror, but not to shoot villagers!

Then who did it? And why did you file this complaint? Taking the matter all the way to the Supreme Court, after the state administration refused to respond to the local courts? Don't we already have our hands full with the Naxals in the state?

Perhaps it could be all the machinations of the media? Or of the NGOs? What have they done for you? Do you know these people? Why are you trusting them? They might have seemed to have helped you in the past, or not, but how do you know they have not framed you? So that they themselves can get some publicity? Or maybe they have some other devious motive? In this twisted world of Bastar, anything is possible. We would have guessed they shot you, but it seems that all of them were far away when the incident took place. Unfortunately it is just impossible that they shot you.

Look at them. You have just met relatives who you never knew existed, who care for you so much, and even then the reporters and the NGO's want to talk to you and bother you at this time? What kind of people are these?

Do not worry, now you are in our hands. You will be safe with us. We have no doubt that you had been forced to stay with those bad people, and make confessions, make up stories that you saw people being killed. But there is law and order in the state. You cannot do this in Chhattisgarh. They almost made off with you, thank goodness we could save you in time.

We will take good care of you. You will have everything. Even staying alive is lot more than Adivasi women can expect nowadays. And not only are you alive, we are even taking good care of you. Your new relatives, the jail doctor who looked at you, myself, we all will keep you safe. You are famous. Perhaps even Vish, none other than our DIG, might come by to wish you.

See, this is the inside of the train coach. It is not so bad, is it? Do not stare vacantly in the forests outside your cell, you will not be going back there. What is there but danger? Here you can do a lot better. We are going to build a whole new visitor's centre. You know, for those Japanese industrialists who are buying our iron ore. Even at 400 Rs a ton, though a minuscule fraction of the market rate, it is still not free. Maybe you can do some indigenous Gondi dances for them when they come? When your leg is ok? Or at least sing a Gondi song, maybe even teach the travellers the dialect of the vanished people, of whom a few lucky ones like you will be remaining?

Maybe you can just directly learn English, instead of learning Hindi. That might the be the best way to start your new life. And then you can be thankful to the people who saved you. Our Vedanta. My Tata. From Essar with love.

But still we have not answered the little snagging question. Who shot you?

As Holmes said, “when you have eliminated the impossible, whatever remains, however improbable, must be the truth”.

Were you really shot? Maybe you were not shot at all? Like the dog in the night, maybe we were just looking for something that was not there to start with?
Case closed! Just a simple fracture from a fall! Our own certified doctor's will testify to it. See, we knew it all along. And that means your petition is no good. Just something forced out of you my the evil people who had kidnapped you. Do not worry. It is not your fault. We will take care of them. They will know that there is still law and order in Bastar. And it has all worked out for you. Are you not happy that this has happened?

Nothing can escape my eyes. I know what you were searching for all your life. And I am so glad that we can give it to you. You wanted out of your forest life all along, did you not? Despite what all the NGOs and media have to say, you wanted development to happen, is not that so? Dreams of being famous and accepted? Now it has all happened!