As conflict grows in West Asia, the US-Saudi Gulf Widens with the US more cautious, Saudi Arabia assertive 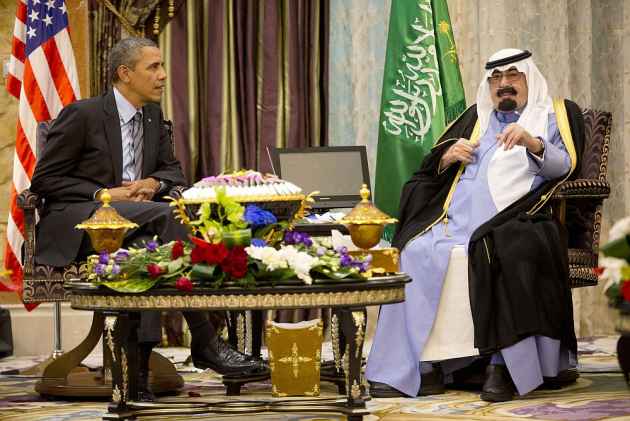 Those who expected the summit between US President Obama and Saudi King Abdullah to produce a “reset” button after unusually strained relations between the two nations were bound to be disappointed. While the Obama administration reassured its Saudi hosts that the differences between the two sides were “tactical”, a careful reading of the assertive, and risky, policies that Saudi Arabia has adopted in places as varied as Syria, EgyptIraq and Iran— in sharp difference withObama administration’s extremely cautious, if not ambiguous policies in the region— reveals that the difference is perhaps deeper, more philosophical, and unlikely to be bridged in a two-hour meeting or perhaps even over the next two years. Developments in Egypt, Syria, Iran and Iraq since the March meeting have only underlined the growing gulf between the two strategic allies.

The unusually blunt, public criticism that some Saudi officials and analysts have leveled against the Obama administration in Saudi and US media suggests that the profound difference stems from varying perceptions of the threat that the region’s crises pose to the national security of each nation. More importantly, the two nations have differing conceptions of their own capacity and obligation to resolve these crises.

While the US poses serious questions about its ability to control events in the Middle East and major reservations about whether it is obligated to try to stabilize a region spiraling out of control, Saudi Arabia has reacted to this US soul-searching by declaring its readiness to pursue a more “assertive” foreign policy to advance its own interests “with or without the support” of western allies.

The Saudis have suggested that as the sole remaining superpower, the US was best positioned to restore the status quo in the Middle East.

And while Obama reiterated at a recent address at West Point that the US remains the sole “indispensable” nation in the world and that it must continue to lead because “no one else will,” he also acknowledged that some of what he considered to be the worst US foreign policy blunders were the result of rushing into “military adventures” with minimal circumspection. It is safe to assume that the president includes the 2003 US invasion of Iraq in that category.

As the controversial Iraq war casts its long shadow over the Obama administration’s non-committal policies in the region, the Saudi leadership’s expectations from the US until recently may have been predicated on another Iraq war— when the administration of George H.W. Bush demonstrating its commitment to Saudi Arabia’s security in 1990 deployed 500,000 US troops to the kingdom to expel Saddam Hussein’s forces from neighbouring Kuwait. In the eyes of Saudis, that war not only proved unrivalled primacy of the United States on the international stage, it also demonstrated loyalty to its friends.

While the Arab Spring clearly challenged many assumptions about the Middle East, unleashing discontent and sweeping away dictators, one trend is sure: Saudi Arabia detests instability and prefers resoluteness, especially in times of crisis. The Saudis may have come to terms with two new realities: First, the Middle East has been reconfigured in a fundamental way, and the second, the US appears unwilling— and perhaps incapable— of undoing this change.

While the Obama administration is doing all it can to avoid becoming embroiled in the myriad of crises across the region, Saudi Arabia has not stood on the sidelines. The contrast is stark and can be seen in Syria, Egypt, Iraq and Iran.

As the US continues to struggle with the decision whether to provide military support to the moderate faction of the Syrian rebels fighting to topple the Assad regime, the Saudis suggest that they see Syria as a defining moment— an opportunity to stop what they see as Iranian “meddling” in the region by removing its closest Arab ally. The Saudis also realize that as the leader of the Sunni Muslim world, many inside and outside Saudi Arabia think the kingdom has a moral— if not a religious— obligation to come to the aid of its Sunni brethren in Syria who are bearing the brunt of the Assad regime’s brutality.

In Egypt, where the US expressed its concern about the military-backed government’s widening crackdown on the Muslim Brotherhood and has cut economic and military aid to pressure the then transitional government to change course, the Saudis were the first to praise the toppling of the Brotherhood’s Mohamed Morsi. Riyadh pledged billions of dollars of economic aid to shore up the new government of now President Abdul Fatah Sissi and declared the Brotherhood a terrorist organization. As Obama continues to test the water in Egypt, the Saudis made up their mind some time ago, they’re all in supporting the predictability provided by Sissi’s government.

The Obama administration learned a valuable lesson from the George W. Bush administration’s ill-conceived plan to topple Iraq’s former President Saddam Hussein. Nevertheless, the administration finds it difficult to distance itself completely from Iraq, as Prime Minister Nouri al-Maliki, installed with US backing, struggles mightily to rebuild his nation and the Iraqi state while battling extremism and militants who have since over-run the country’s second largest city.

For the Saudis, Saddam Hussein was a lesser of two evils. He was a bulwark against Iranian expansion in the region, and his removal paved the way to a regime that is perhaps now Iran’s closest ally and with whom the Saudis have arguably their most troublesome relations. Saudi Arabia had serious reservations about the 2003 invasion and has since chided the US repeatedly for handing Iraq to Iran on “a silver platter.” The brazen attempt by the Al Qaeda–affiliated Islamic State in Iraq and The Levant, ISIL, to seize control of Mosul confirms the Saudis’ worst fears about lingering instability in Iraq. The Obama administration will find it difficult not to come to the aid of Maliki, especially given the presence of large numbers of Al Qaeda fighters fighting in the open. The Saudis want nothing to do with Maliki and blame him for fomenting sectarianism in Iraq.

Perhaps Saudi Arabia expected the United States to apply more pressure on Iran after the Iraq invasion. The Saudis have viewed secret talks between the US and Iran leading to current negotiations between the P5+1 countries and Iran over its nuclear energy program as a breach of trust. While the Obama administration seems to be willing to turn a new page in US-Iran relations, many Saudis express deep misgivings about Iran’s intentions regarding its nuclear activities and its wider role in the region, especially its ties to Shia minorities in the Gulf monarchies. The Saudis and Iranians find themselves on opposite sides in virtually every crisis currently gripping the region.

The US and Saudi positions remain aligned on energy policy and counterterrorism, both crucial.However, some would argue that the US drive to lessen its dependence on foreign oil, by developing its previously economically prohibitive shale oil and gas reserves, is a major reason behind its reluctance to act more assertively in the Middle East. The Arab Spring has exposed regional instability and fissures in how the two sides view the US role in the region. As the Obama administration has sought to redefine and reduce its commitments in the Middle East, the Saudis felt like they “had no choice” but to expand their own influence. In this context, full “alignment” is difficult to achieve.

Fahad Nazer is a political analyst at JTG Inc. in Vienna, Virginia. His writing has appeared in The New York Times, Foreign Policy, CNN , Al Monitor and has been featured by the Carnegie Endowment for International Peace. Rights: Copyright © 2014 The Whitney and Betty MacMillan Center for International and Area Studies at Yale. Courtesy: YaleGlobal Online