Jaswant Singh’s book on Mohammed Ali Jinnah, which has become a talking point across India, has revived the old debate about Partition. Time for a reality check before we decide on heroes and villains 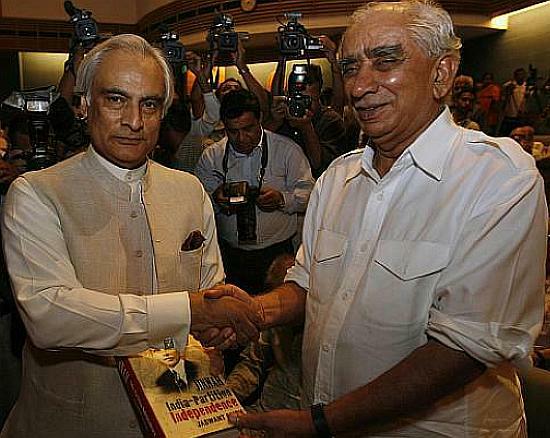 Jaswant Singh, former cabinet minister, has written a book on Mohammed Ali Jinnah which has become a talking point across India . I have not read the book. I have heard Jaswant Singh on TV expounding his views on Jinnah. The main thrust of his work seems to be:

1) Jinnah has been unnecessarily demonised. He was a great man and not wholly responsible for the Partition of the subcontinent.

2) Pandit Nehru was primarily responsible for the Partition because he believed in a centralized India which left no space for the Muslims to protect themselves against Hindu domination.

3) Mahatma Gandhi, and other Congress leaders were opposed to the Partition and would not have allowed it if it were not for Nehru.

The view about Nehru’s role in the Partition is not new. This scribe wrote about it in a book of just 107 text pages, not over 600 pages, which were published 20 ago. Others, such as former ADC to Lord Mountbatten and later India ’s ambassador abroad, Narendra Singh Sarila, wrote on the subject of the Partition at greater length.

Let us consider the three main postulates of Jaswant Singh’s views outlined above.

1) Jinnah was not a “great” man. He was articulate, highly intelligent and focused. He missed greatness by a wide margin because he willingly colluded with the British to create a Pakistan about which he had not even determined boundaries or shape. He mainly fulfilled British goals while satisfying his own vanity.

Independence came first; the boundaries of the divided nations came later. The British had decided on Partition to serve their own strategic ends. On 29 March 1945, after Viceroy Lord Wavell met Prime Minister Churchill in London he recorded: “He (Churchill) seems to favour partition of India into Pakistan, Hindustan and Princestan.”

Sir Martin Gilbert, the British biographer of Winston Churchill revealed that Churchill had asked Jinnah to dispatch secret letters to him by addressing them to a lady, Elizabeth Giliat, who had been Churchill’s secretary. This secret interaction continued for years. Jinnah’s key decisions between 1940 and 1946, including the demand for Pakistan in 1940, were taken after getting the nod from Churchill or Lord Linlithgow and Wavell, both Churchill's admirers.

Jinnah admitted during the Simla Conference in 1945 that he was receiving advice from London . In other words, Jinnah was as much a British puppet on a string as were the top Indian leaders.

2) Yes, Pandit Nehru was primarily responsible for the Partition. This was not because he was emotionally committed to a centralised India but because he too was thoroughly programmed by the British since his school days. His proximity to Lord Mountbatten has been recorded by Maulana Abul Kalam Azad and historian Shashi Joshi among others. Even before Mountbatten’s arrival in India Lord Wavell had complained that Nehru was often informed by Whitehall before he was!

3) Mahatma Gandhi and other Congress leaders may have been unhappy about the Partition. They did not oppose it. When the resolution to accept Partition was taken by the Congress on June 3, 1947 Gandhi observed his day of silence. He assured Mountbatten on June 2 that he would not oppose Partition.

It can be nobody’s case that Nehru was so powerful that he could override Gandhi and the rest. The truth was that Gandhi lacked the gumption to oppose Partition when it came to the crunch because he knew that his adversary was not Nehru but Britain . At Mountbatten’s bidding he could undertake a fast unto death to compel the Indian government to pay adequate compensation to Pakistan . He made no such protest when his life’s work of creating a united independent India was being destroyed.

Gandhi’s belated attempt to undo his mistake by wanting to settle in Pakistan and by demanding the dissolution of the Congress in his last will and testament was aborted by his death.

These judgments may appear cruel. Truth is seldom kind. Any assessment about the causes that led to the Partition of India would be flawed unless the central role of the British in creating it, and the compliant role of the Indian and Pakistani leaders in accepting it, are recognized.

The most clinching evidence of this is provided by the recorded views of Christopher Beaumont who was private secretary to Sir Cyril Radcliffe, chairman of the Indo-Pakistan Boundary Commission. His private papers were recently released by his son, Robert Beaumont. The elder Beaumont wrote in 1947:

“The viceroy, Mountbatten, must take the blame - though not the sole blame - for the massacres in the Punjab in which between 500,000 to a million men, women and children perished…The handover of power was done too quickly."

Christopher Beaumont was most scathing about how partition affected the Punjab . He wrote:

“"The Punjab partition was a disaster… Geography, canals, railways and roads all argued against dismemberment… The trouble was that Muslims, Hindus and Sikhs were an integrated population so that it was impossible to make a frontier without widespread dislocation… Thousands of people died or were uprooted from their homes in what was in effect a civil war… By the end of 1947 there were virtually no Hindus or Sikhs living in west Punjab - now part of Pakistan - and no Muslims in the Indian east… The British government and Mountbatten must bear a large part of the blame for this tragedy."

A few Britons are beginning to confront the truth. Will Indians ever start doing the same?