For the second time in less than two years, an over-confident Sri Lankan Army (SLA) has walked into a deadly trap laid by the Liberation Tigers of Tamil Eelam (LTTE) in the Muhamalai area near Jaffna For the second time in less than two years, an over-confident Sri Lankan Army (SLA) has walked into a deadly trap laid by the Liberation Tigers of Tamil Eelam (LTTE) in the Muhamalai area near Jaffna in the Northern Province of Sri Lanka on April 23 ,2008, and faced a rout. It not only lost over 150 soldiers, who were killed by the LTTE, but also enabled the LTTE to seize a large quantity of arms and ammunition from the battle scene. The LTTE has not had such a bonanza of recovered arms and ammunition since the earlier SLA rout in the same area on October 11,2006. My assessment of the earlier rout may be seen in my article titled Tigers Strike Back

After the rout of October 11,2006, the SLA, as is its wont, had played down the fatalities suffered by it and played up the fatalities which it claimed to have inflicted on the LTTE. Only after the LTTE disseminated details of the fatalities inflicted by it on the SLA, did the latter admit that 139 soldiers were killed by the LTTE. A few weeks later, Lt.Gen.Sarath Fonseka, the chief of the SLA, had gone to the US, inter alia, for a medical check-up in connection with the injuries suffered by him in an unsuccessful attempt by the LTTE to kill him through a woman suicide bomber. Reliable sources reported at that time that during his interactions with American military officers in Washington DC he admitted that the SLA had suffered nearly 400 fatalities on October 11, 2006. He allegedly blamed Mr Gothbaya Rajapaksa, the brother of President Mahinda Rajapaksa, who is the Defence Secretary, for hastily pushing the Army into a battle when it was not yet ready--that too in a terrain which the LTTE knew better than the SLA. 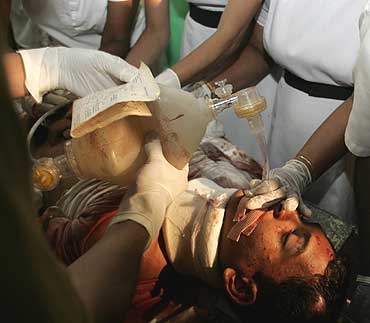 After the battle of April 23, 2008, the SLA claimed that it suffered 43 fatalities with 33 more soldiers missing in action, but the correspondent of the CNN TV channel and the Agence France Press (AFP) have reported that the fatalities suffered by the SLA were more than 100. Reliable Sri Lankan Police sources estimate the SLA fatalities at about 150. The SLA has claimed to have killed over 100 LTTE soldiers, but the LTTE has admitted only 16 fatalities. In an analysis of the casualty figures, the AFP has pointed out that in the beginning of this year, the SLA had given the total strength of the LTTE as about 3000, but the total number of fatalities which the SLA has claimed to have inflicted on the LTTE since January 1,2008, is 3105, when one adds up all the figures given in the SLA's statements.

Since the beginning of this year, the SLA and the Defence Ministry have embarked on a campaign of disinformation regarding the ground situation in the Northern Province. As part of this disinformation campaign, not a day has passed without their reporting some operation or the other resulting in large fatalities inflicted on the LTTE. The purpose of this campaign was to buttress the morale of the soldiers of the SLA and the Sinhalese people, to give themselves in public perception an aura of legendary military prowess and weaken the morale of the LTTE and its Sri Lankan Tamil supporters. According to some critics of the Government, many of the so-called battles reported as part of this disinformation campaign allegedly existed only in the figment of the SLA's imagination.

Many tall claims were made as part of this disinformation campaign such as: pin-point intelligence has started flowing from human sources in the Northern Province; many precision air strikes had been made on the LTTE's political and operational nerve-centres with the help of such pin-point information; the LTTE's Navy had been practically wiped out; the LTTE's hold in the North was weakening and the SLA would be able to rout it and re-establish its control over the North before the end of this year.

One of the basic principles of counter-insurgency and counter-terrorism is that you don't indulge in disinformation in your own territory and directed at your own people. It could prove counter-productive and dangerous by creating a sense of over-confidence in your own troops and people. When the troops realise that they had been sent into battles on the basis of false information and assessments, the credibility of the political and military leadership in the eyes of the people and the soldiers would suffer. The LTTE and its Sri Lankan Tamil supporters know well the ground situation in their territory. They will not be deceived by such a disinformation campaign. It is the Sinhalese public and the soldiers, who will be deceived by it.

This is what happened in October, 2006, and this is what has happened now. The LTTE did on April 23 ,2008, exactly what it did on October 11,2006. After fighting for some time in the face of an SLA offensive, it pretended to withdraw and vacate a small part of the territory under its control. Thinking in their euphoria that they have defeated the LTTE and forced its retreat, the SLA soldiers rushed into the area vacated by the LTTE and found themselves surrounded by it on all sides. It mowed down the soldiers before they could recover from their surprise.

The rout inflicted by the LTTE on the SLA would serve as a morale-booster for its leaders and cadres. It shows that its capability for conventional-style battles is intact and strong in the Northern Province, where the leadership remains united. It had weakened in the Eastern Province following the desertion in March,2004, of Karuna, a capable officer of the LTTE, who looked after its conventional style operations. It was this weakening, which had enabled the SLA to wrest control of the Eastern Province with the help of the Eastern Tamil deserters from the LTTE's army.

Over-all, despite the success on April 23, 2008, the LTTE's position is still weak for want of an air cover and due to depletion in its arms and ammunition holdings. The battle of April 23 has replenished its holdings to some extent, but not adequately enough. The dilution of the support and sympathy of the international community has been another handicap. However, the motivation and the determination of its cadres are still strong. Any expectations of an easy walk-over in the North nursed by the SLA are likely to be belied unless its air strikes succeed in eliminating Prabakaran, the leader of the LTTE.