'The Time Has Come For Hard Decisions' 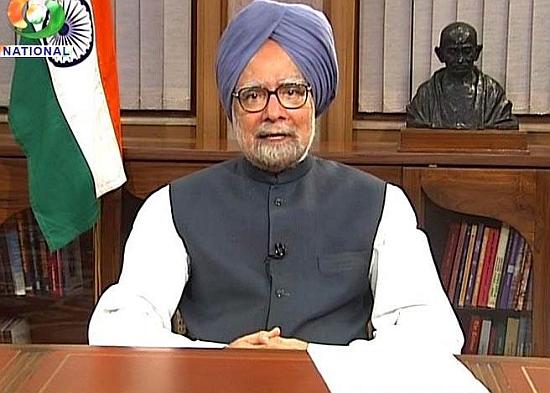 PM's address to the Nation

My dear brothers and sisters,

I am speaking to you tonight to explain the reasons for some important economic policy decisions the government has recently taken. Some political parties have opposed them. You have a right to know the truth about why we have taken these decisions.

No government likes to impose burdens on the common man. Our Government has been voted to office twice to protect the interests of the aam admi.

At the same time, it is the responsibility of the government to defend the national interest, and protect the long term future of our people. This means that we must ensure that the economy grows rapidly, and that this generates enough productive jobs for the youth of our country.  Rapid  growth is also necessary to raise the revenues we need to finance our programmes in education, health care, housing and rural employment.

The challenge is that we have to do this at a time when  the world economy is experiencing great difficulty.  The United States and Europe are struggling to deal with an economic slowdown and financial crisis. Even China is slowing down.

We too have been affected, though I believe we have been able to limit the effect of the global crisis.

We are at a point where we can reverse the slowdown in our growth.  We need a revival in investor confidence domestically and globally.  The decisions we have taken recently are necessary for this purpose.

Let me begin with the rise in diesel prices and the cap on LPG cylinders.

We import almost 80% of our oil, and oil prices in the world market have increased sharply in the past four years. We did not pass on most of this price rise to you, so that we could protect you from hardship to the maximum extent possible.

As a result, the subsidy on petroleum products has grown enormously. It was Rs. 1 lakh 40 thousand crores last year.  If we had not acted, it would have been over Rs. 200,000 crores this year.

Where would the money for this have come from? Money does not grow on trees. If we had not acted, it would have meant a higher fiscal deficit, that is, an unsustainable increase in government expenditure vis-a-vis government income. If unchecked, this would  lead to a further steep rise in prices and a loss of confidence in our economy.  The prices of essential commodities would rise faster.  Both domestic as well as foreign investors would be reluctant to invest in our economy. Interest rates would rise.  Our companies would not be able to borrow abroad.  Unemployment would increase.

The last time we faced this problem was in 1991.  Nobody was willing to lend us even small amounts of money then.  We came out of that crisis by taking strong, resolute steps. You can see the positive results of those steps. We are not in that situation today, but we must act before people lose confidence in our economy.

I know what happened in 1991 and I would be failing in my duty as Prime Minister of this great country if I did not take strong preventive action.

The world is not kind to those who do not tackle their own problems. Many European countries are in this position today.  They cannot pay their bills and are looking to others for help.  They are having to cut wages or pensions to satisfy potential lenders.

I am determined to see that India will not be pushed into that situation.  But I can succeed only if I can persuade you to understand why we had to act.

We raised the price of diesel by just Rs. 5 per litre instead of the Rs 17 that was needed to cut all losses on diesel. Much of diesel is used by big cars and SUVs owned by the rich and by factories and businesses. Should government run large fiscal deficits to subsidise them?

We reduced taxes on petrol by Rs. 5 per litre to prevent a rise in petrol prices. We did this so that the crores of middle class people who drive scooters and motorcycles are not hit further.

We did not touch the price of kerosene which is consumed by the poor.

My Dear Brothers and Sisters,

You should know that even after the price increase, the prices of diesel and LPG in India are lower than those in Bangladesh, Nepal, Sri Lanka and Pakistan.

The total subsidy on petroleum products will still be Rs. 160 thousand  crores. This is more than what we spend on Health and Education together. We held back from raising prices further because I hoped that oil prices would decline.

Let me now turn to the decision to allow foreign investment in retail trade.  Some think it will hurt small traders.This is not true.

Organised, modern retailing is already present in our country and is growing. All our major cities have large retail chains. Our national capital, Delhi, has many new shopping centres. But it has also seen a three-fold increase in small shops in recent years.

In a growing economy, there is enough space for big and small to grow. The fear that small retailers will be wiped out is completely baseless.

We should also remember that the opening of organised retail to foreign investment will benefit our farmers. According to the regulations we have introduced, those who bring FDI have to invest 50% of their money in building new warehouses, cold-storages, and modern transport systems. This will help to ensure that a third of our fruits and vegetables, which at present are wasted because of storage and transit losses, actually reach the consumer. Wastage will go down; prices paid to farmers will go up; and prices paid by consumers will go down.

We recognise that  some political parties are opposed to this step.  That is why State governments have been allowed to decide whether foreign investment in retail can come into their state. But one state should not stop another state from seeking a better life for its farmers, for its youth and for its consumers.

In 1991, when we opened India to foreign investment in manufacturing, many were worried. But today, Indian companies are competing effectively both at home and abroad, and they are investing around the world. More importantly, foreign companies are creating jobs for our youth -- in Information Technology, in steel, and in the auto industry. I am sure this will happen in retail trade as well.

My Dear Brothers and Sisters,

The UPA Government is the government of the aam aadmi.

In the past 8 years our economy has grown at a record annual rate of 8.2 per cent.  We have ensured that poverty has declined much faster, agriculture has grown faster, and rural consumption per person has also grown faster.

We need to do more, and we will do more. But to achieve inclusiveness we need more growth. And we must avoid high fiscal deficits which cause a loss of confidence in our economy.

I promise you that I will do everything necessary to put our country back on the path of high and inclusive growth.  But I need your support. Please do not be misled by those who want to confuse you by spreading fear and false information. The same tactics were adopted in 1991. They did not succeed then. They will not succeed now. I have full faith in the wisdom of the people of India.

We have much to do to protect the interests of our nation, and we must do it now.  At times, we need to say "No" to the easy option and say "Yes" to the more difficult one. This happens to be one such occasion. The time has come for hard decisions. For this I need your trust, your understanding, and your cooperation.

As Prime Minister of this great country, I appeal to each one of you to strengthen my hands so that we can take our country forward and build a better and more prosperous future for ourselves and for the generations to come.