The Ugly Americans: Lying, Drinking And Pissing On Their Hosts

With just two more days to go before the Games come to an end, it has definitely produced a bunch of villains who will live in infamy for a long time. Topping the charts of this dubious list is the American swimmer Ryan Lochte. 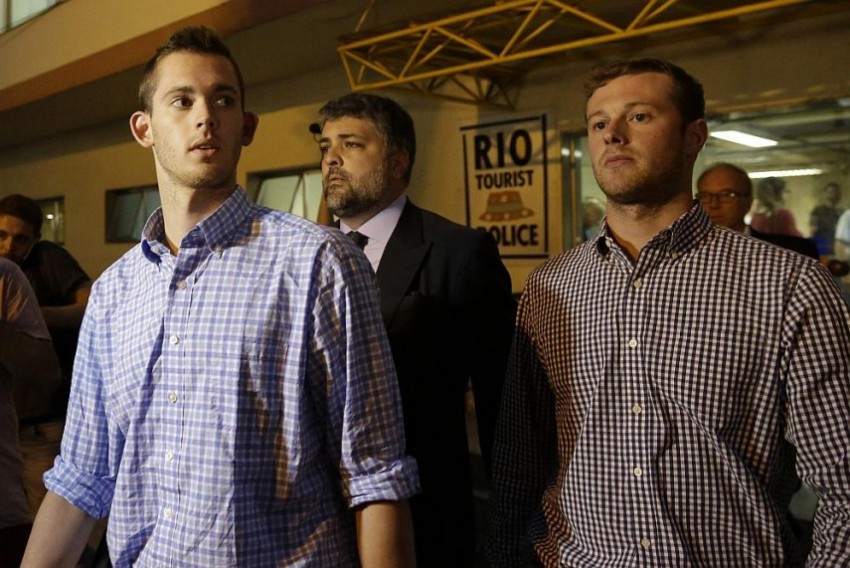 American Olympic swimmers Gunnar Bentz, left, and Jack Conger leave a police station in the Leblon neighborhood of Rio de Janeiro, Brazi. The two were taken off their flight from Brazil to the U.S. on Wednesday by local authorities amid an investigation into a reported robbery targeting Ryan Lochte and his teammates. A Brazilian police officer told The Associated Press that Lochte fabricated a story about being robbed at gunpoint in Rio de Janeiro.
AP Photo/Leo Correa
Shobhan Saxena August 19, 2016 00:00 IST The Ugly Americans: Lying, Drinking And Pissing On Their Hosts 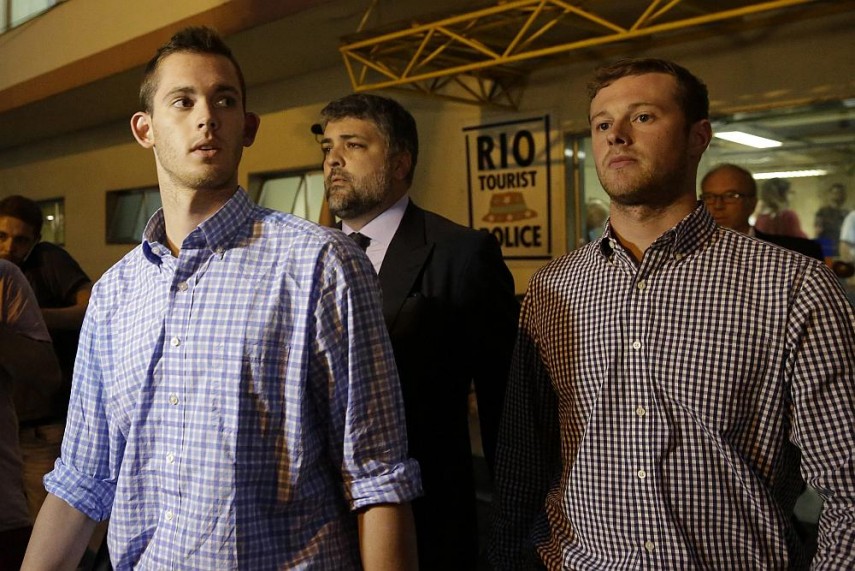 Almost all Olympics in living memory have produced some heroes: athletes who created new records despite big hurdles or completely changed the way we see a specific discipline. Of course, Usain Bolt and Michael Phelps are here. But they both are old stories. They have been around. They are basically just doing action replay of their past achievements – in slower motions. With just two more days to go before the Games come to an end on Sunday, this Olympic is yet to produce a real, genuine hero. But, it has definitely produced a bunch of villains who will live in infamy for a long time.

Topping the charts of this dubious list is the American swimmer Ryan Lochte, who left Brazil on Tuesday just before a local judge issued orders for his detention.  The 12-time Olympic medallist who has lived in the shadow of Phelps, and his fellow swimmers Jack Conger, Gunnar Bentz and Jimmy Feigen made news in Rio not for their sporting achievements but for being “victims of crime”.

Last Saturday, Lochte and his buddies returned to the Olympic Village early in the morning after a party at the French Fan House.  Soon a story, in which they claimed that they had been robbed by armed thieves, went viral.   Lochte’s version that he had a gun put to his face, made to lie on the ground and robbed off his wallet was easily bought by the international media. It had all the right ingredients: a First World athlete getting lost in a crime-infested Third World city and getting robbed. No surprises there.

But the American athletes’ story had huge holes. They came back to the Olympic Village with their smart phones in their pockets. The thieves, according to the swimmers, just took their wallets. In Rio – or for that matter any city in the world – if they would put a gun to your face, they leave you with nothing. But Lochte and his buddies had somehow “managed to save” their expensive watches and phones from the bandits who made them crawl in a dark corner of this city.

By Wednesday, the holes in the Americans’ story became bigger as the CCTV footage at the village showed that the athletes had their wallets intact when they got back to their apartments. In the meantime, another footage showed the swimmers vandalising a gas station after urinating on its wall. Local media reported on Wednesday that after the gas station workers asked the swimmers to use the restroom, they tore an advertising sign and trashed a shop inside the gas station.

After they indulged in vandalism at the gas station, a security guard pulled a gun and made the Americans sit on the floor of the gas station. But by the time the Americans reached the village, the guard had turned into a thief and they had become victims of a crime that never happened. They basically made up a story of being robbed at gunpoint to cover up their act of hooliganism.

With media reports suggesting on Tuesday and Wednesday that the Americans were probably lying about what had happened, a Brazilian judge issued a warrant to seize the passport of Lochte in hopes of detaining him before he returned home. But Lochte had already left for US on Tuesday. However, on Wednesday, two American swimmers were pulled off their flights by Brazilian authorities. And on Thursday, at a press conference, the head of Rio’s civil police said one of the swimmers had confessed that the story was a “lie fabricated by Lochte” who, according to the police, was “drunk and stressed, and created the fake story that he then re-told on US television”.

But according to several other versions of the story, the US swimmers were not only totally smashed, they also had “two young girls” in their taxi. According to another account, the Americans went around the city trying to buy drugs for almost three hours; and they looked totally stoned when they arrived at the gas station which they later vandalised.

Lochte is already in the US. His buddies too will be home soon. Despite the local police fuming with anger, the Rio 2016 organisers have already decided to dismiss it as a small matter. “These kids tried to have fun, they tried to represent their country to the best of their abilities,” the Rio 2016 spokesman, Mario Andrada, told reporters on Wednesday.

Few persons in this country would buy Andrada’s argument that Lochte and his gang was just trying to have some fun. The facts of the case, which is still under investigation, are more or less clear. The fact is that the Americans broke the law, behaved badly and then pretended to be victims of an armed gang. They knew the story would sell well at home and in the Brazilian media.

Like most South American countries, Brazil was a backyard of the US for most of the 20th century.  Lochte and other athletes, though young, still seem to have the old mindset of going down south, getting drunk, picking local women, behaving badly,  and pretending to be victims of the natives when caught with their pants down.

But things have changed in Brazil a bit in the past few years. Lochte might have gotten away with his bad behaviour and lies, but he leaves behind his image of being an Ugly American who misses no opportunity to piss on his hosts.

Who Will Save The Games From These Officials And Athletes?