Rain over the past few days has again whipped up the froth in the lake with foam spilling over a high fence that the authorities had erected. 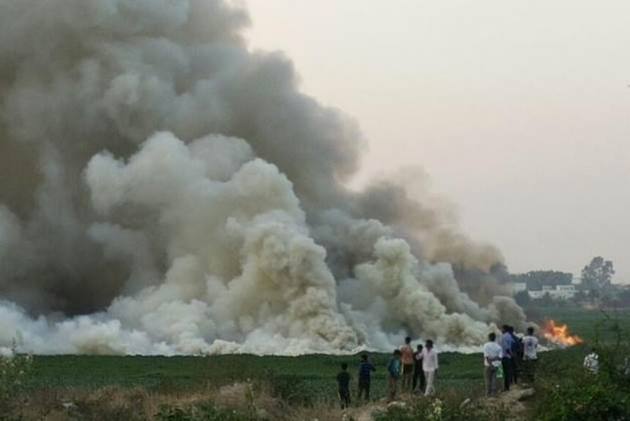 Bangalore's Bellandur Lake is back in the news as rain over the past few days has again whipped up the froth in the lake, notorious for its polluted waters. On Tuesday, foam spilled over a high fence that the authorities had erected.

"The Bellandur lake is very unique, during the summers it catches fire and in the monsoon, pretty much every year, there's frothing," says Sonali Singh, a resident of the area who's part of a volunteer forum rallying for action to save the lake.

Bellandur lake is the largest water body in Bangalore and over the years it has come to be a symbol of the woeful condition of the city's lakes and tanks -- beset, as they are, by untreated sewage and encroachments.

In January this year, images of the smouldering lake went viral on social media -- a similar episode had taken place the year before as well. The National Green Tribunal (NGT), which had come down heavily on the authorities, had directed a time-bound action plan to clean up and restore the lake.

The frothing on Tuesday was excessive and the stop-gap measures taken by the authorities have not worked, say residents. The Bangalore Development Authority has redesigned gradients to prevent the water from churning, installed sluice gates and sprinklers. "Three months back, Deputy Chief Minister, G. Parameshwara, had visited the lake and he had re-assured residents that there would be visible change. But, there has been absolutely no work going on at the lake. Till a few months back, with the government under NGT's scanner, there were some short term actions like fencing, de-weeding and removal of encroachments" says Singh.

Reports suggest that the government's action plan for desilting Bellandur lake can be taken up only after it commissions the sewage treatment plants -- which are currently being built -- by 2020. Residents, however, say they cannot wait that long for remedial measures. "There are alternate solutions given by experts like bio-remediation. The government has the means and the know-how but just need the will to rejuvenate the lake," says Singh.

In July, the Karnataka government, in its annual budget, had earmarked Rs 50 crore for the all-round rejuvenation of the lake. It even spoke of a plan to eventually use water from the lake for agricultural activity in Bangalore rural.

However, Bellandur lake's woes continue. To add, an ambitious plan to pump water from Bangalore's lakes, such as Bellandur, into parched tanks in the neighbouring district of Kolar -- called the KC Valley Project -- also ran into problems. The project took off in June but soon enough, residents in Kolar were complaining that the Lakshmisagara lake in their district too was frothing.