The View From Beijing

How does China view the recent meeting between Manmohan Singh and Xi Jinping? 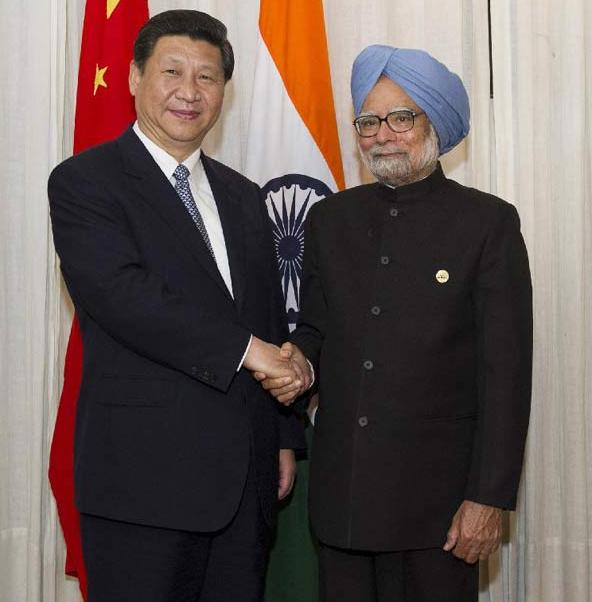 The PLA Daily of March 29, 2013, has carried the following report on the bilateral meeting between Prime Minister Manmohan Singh and Chinese President Xi Jinping in the margins of the BRICS summit at Durban on March 27.

Xi made the remarks during a meeting with Indian Prime Minister Manmohan Singh on the sidelines of a summit of BRICS countries -- Brazil, Russia, India, China and South Africa -- in the South African port city of Durban.

China and India, as the world's two largest developing nations, have a similar historic mission to boost their social and economic development, Xi said.

Both countries are in an important period of strategic opportunities, he said, adding that China-India relations have broad prospects for development.

China, which regards its ties with India as one of the most important bilateral relationship, commits itself to pushing forward the two countries' strategic cooperative partnership, Xi said.

He called on the two sides to maintain high-level reciprocal visits and contacts, make full use of political dialogues and consultations at various levels to strengthen strategic and political communication.

China and India should broaden exchanges and cooperation between their armed forces and deepen mutual military and security trust, Xi said.

The Chinese president said the two countries, with the help of such cooperative mechanisms as strategic and economic dialogue, should also discuss their cooperation on large-scale infrastructure projects.

He said the two sides should strengthen coordination and cooperation within the United Nations, BRICS, the G20 and other multilateral groupings, support each other's participation in regional cooperation, and promote peace, stability and development in Asia.

On the border issue, Xi said China and India should improve and make good use of the mechanism of special representatives to strive for a fair, rational solution framework acceptable to both sides as soon as possible.

Meanwhile, he said, the two sides should continue to safeguard peace in their border areas and prevent the issue from affecting bilateral relations.

Singh expressed admiration for China's achievements in development, saying that developing good-neighborly and friendly relations with China and realizing common development along with China is a priority of the country's foreign policy.

India hopes to continue to maintain high-level exchanges, dialogue and communication with China, he added.

He also voiced the hope that the two countries would respect each other's core interests and major concerns, deepen mutual strategic trust, strengthen coordination and cooperation on international affairs, and safeguard peace and stability in the region and the world at large.

Singh said his country, which adheres to an independent foreign policy, will not be used as a tool to contain China, adding that India is willing to make concerted efforts with China to show the world that they are cooperative partners instead of rivals.

India will abide by political guidelines set by both sides and seek a solution to the bilateral border issue from a strategic height with a commitment to safeguard peace in their border areas, he said.

The Indian prime minister said his country recognizes the Tibet Autonomous Region is a part of the Chinese territory and that India will not allow Tibetans to conduct political activities against China in India.

As this writer has been pointing out in the past, there are nuances in Chinese references to its territorial disputes with India and with some ASEAN countries and Japan in the South and East China Seas.

While China continues to project its maritime disputes as its “core interests” not permitting any compromise, it projects its dispute with India as calling for a mutually acceptable solution.

This comes out once again in the PLA Daily’s report on the talks between the Prime Minister and Mr.Xi. It says:

“On the border issue, Xi said China and India should improve and make good use of the mechanism of special representatives to strive for a fair, rational solution framework acceptable to both sides as soon as possible. Meanwhile, he said, the two sides should continue to safeguard peace in their border areas and prevent the issue from affecting bilateral relations”

The Chinese formulation is more or less the same as in the past except significantly its reference to finding a solution “ as soon as possible.” Past Chinese formulations used to refer to the border dispute as a complex historical legacy which will require time to solve. The need for a solution “as soon as possible” is stressed now. It is not yet clear as to why this change.

If the PLA Daily’s references to our Prime Minister’s assurances on Tibet are correct, one would wonder what was the need for us to take the initiative in raising this on our own when China continues to maintain a silence on our core concerns regarding its increasing presence in Pakistan-Occupied Kashmir and Gilgit-Baltisan and in Gwadar and regarding its continuing nuclear supply relationship with Pakistan.