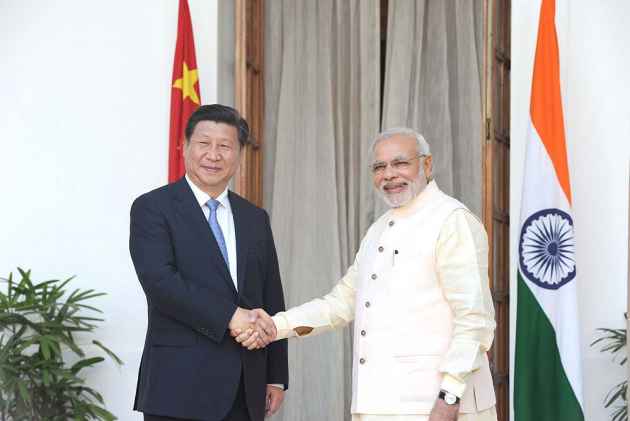 Sixteen documents— ranging from infrastructure development to setting up industrial parks to help expand India’s manufacturing base to upgrading the Indian railway sector as well as a plea for Chinese investment into India worth $ 20 billion in the next five years; in addition to an opening of a new route for Indian pilgrims to Kailash Mansorovar in China— that were signed by India and China today can be termed as nothing but impressive.

Yet, Prime Minister Narendra Modi and visiting Chinese President Xi Jinping failed to break any new ground on three crucial areas—mainly because a cautious India, still not clear of China’s intentions, decided to play the waiting game rather than showing political courage to elevate Sino-Indian ties to a new level.

Prime Minister Modi spared little effort in terms of  ‘optics’ to ensure President Xi’s visit to India was seen as a resounding success. He had flown down to Ahmedabad on Wednesday to receive the Chinese President and hosted a private dinner for him and his wife, Peng Liyuang, a star opera singer of China. The bonhomie and cordiality continued also in Delhi when he hosted a lunch for President Xi and his delegation and President Pranab Mukherjee held a banquet at Rashtrapati Bhawan in honour of his Chinese guests.

But if one moved away from the political level engagement between the two sides and looked at the disputed border of the two sides, especially in East Ladhak, where Indian and Chinese soldiers were staring down at each other—the complexity of the Sino-Indian relationship becomes clear. The developments there were a crude reminder that the unresolved boundary between India and China can continue to threaten attempts at transforming their ties into a meaningful partnership in the days to come.

Now let us look at the three crucial areas where one had expected some significant breakthrough. But remarks from the Indian Prime Minister, who decided to stress on the need for a “peaceful and tranquil” border between the two neighbours and raised other areas of Indian concerns with the Chinese that included Beijing’s “visa policy”—issuing stapled visas to people of Jammu and Kashmir and Arunachal Pradesh as well as better access to the Chinese market for Indian companies to correct the Sino-Indian trade imbalance—showed failure.

Let us begin by looking at the amount of $ 20 billion committed by way of investing in India over the next five years. Though this is a significant amount, it fell far below the expected $ 100 billion worth of investment from the Chinese in the same period. The Chinese consul general in Mumbai had told the Times of India in a recent interview about the amount of investment likely to be made during President Xi’s visit. But only one-fifth that amount was committed. Why?

This is mainly because of China’s past experience of investing in India’s infrastructure sector. China developed a 1200 MW worth power plant in Jhajjar some years back. Though the Chinese company completed the plant in less than three years, India’s decision not to allot a dedicated coal supplying source to it has now turned the project into a loss making body. Therefore, while the $ 20 billion investment commitment from China shows its cautious approach, the onus to attract a bigger volume of investment from the neighbouring country now squarely rests with India. If urgent steps are not taken by Prime Minister Modi—widely seen as a business-friendly leader— investors from China and, possibly from other countries might turn away from India and look at other countries to put in their money.

The second disappointment stems from India’s ambiguous stand on China’s ‘New Silk Route Project’—which involves connectivity both through the land and the sea. Prime Minister Modi made it clear that the proposed Bangladesh-China-India-Myanmar corridor, part of China’s land ‘silk route’ project, will have to wait till there is peace in the region.

While this could be seen as India’s attempt to buy time till it develops infrastructure and connectivity within the country—particularly in the under-developed Northeast—it also shows lack of political courage on part of the new government in Delhi. The Indian Prime Minister could well have told the Chinese that India will take a bit of time to join the proposed BCIM corridor while welcoming it in principle. However, his remarks indicate that despite his public image for reaching out to neighbours, the Modi government continues to adopt the cautious approach that his predecessors had shown in this area. In addition, his lack of comments on the silk route through the sea connectivity shows that Delhi, despite its pubic bravado, has not yet been able to come out with a well-thought out plan to deal with the connectivity in Indian Ocean that will keep its neighbours in South Asia like Sri Lanka, Maldives and Bangladesh from enthusiastically accepting the Chinese offer.

The third and the most telling comment came from the Prime Minister in his attempt at outlining India’s approach to the unsettled border with China. The suggestion to revive the process of ‘clarification of the LAC’ clearly indicates that he has not been well briefed on the subject or he has decided to accept the views offered by advisors who look at the subject purely through the security prism.

The clarification process was discontinued by India—obviously at the suggestion of the Chinese—during the Atal Behari Vajpayee government, which finally opted for the “Special Representative” talks to deal with the contentious issue to show its political commitment to resolve the boundary issue.

Many experts feel the “clarification process of the LAC” is nothing but an attempt at “time-buying” without addressing the real question of dealing directly with the boundary question. It should be kept in mind that unlike in the case of Pakistan, where Line of Control is an agreed boundary between the two sides, the Line of Actual Control (LAC) with China only indicates areas under control of Indian and Chinese troops. More precisely it shows where the Chinese troops stood when it unilaterally decided to withdraw after the 1962 winter war with India. In subsequent negotiations the two sides have a fair idea of the differing perspective of their position in the LAC—or areas which they think are under their control.

The series of intrusions by Chinese and Indian soldiers into each other’s ‘territory’ is precisely because of this unsettled border.

From the Chinese perspective, President’s Xi’s visit was to ensure that India remains interested in China without taking steps and offers from other countries in Asia and beyond to get into an alliance that can create distractions for Beijing and come in the way of its ”rise” and development. President Xi could well have been disappointed with the lack of any major breakthrough during his visit to India. But the series of agreements he signed with Prime Minister Modi shows that he is keen in keeping Delhi interested in China, especially as a potential source of big investment in future as well as seeking its cooperation and support on areas at the global stage that affect both countries.

Prime Minister Modi is regarded as a leader who has the political mandate to take bold decisions. He has to start approaching the boundary issue directly without wasting further time on the clarification process. He can do that by building a broad-based opinion in India to decide on what should be the country’s bottom line to resolve the Sino-Indian boundary issue.

President Xi also enjoys wide spread support among various sections in China. His country has shown maturity and political courage in the past in settling its land boundary disputes with different countries—though China has so far failed in doing the same in resolving its maritime boundary.

If he sees seriousness on part of the Indians, he too may begin a similar process within his own country to arrive at a position which can lead the two countries at arriving at a negotiated settlement to their decade-old disputed boundary. If they manage to do so, its impact on South Asia and beyond will be immense and it may then create the necessary atmosphere where India and China can truly and meaningfully turn their relations into a partnership. One hopes that sooner rather than later such a political initiative will come from Prime Minister Modi and President Xi.