The Year That Was: The Biggest Political Stories Of 2017 That You Have Already Forgotten 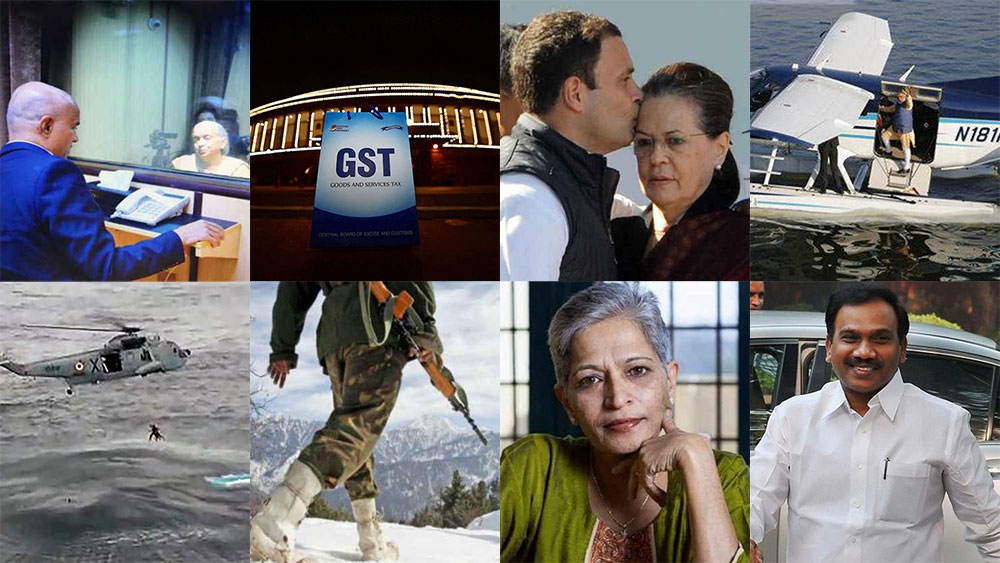 The year 2017 had started with the uncertainties over the Centre’s demonetisation move. Following it, India went through a series of elections, landmark court verdicts, ordinances, violence, protests and so on. As the year ends, Outlook takes a look back at the key developments of the year. Ramnath Kovind, a dalit leader of the BJP serving as the Governor of Bihar, was elected as India’s 14th President in July. One of the most influential ministers in the Narendra Modi government, Venkaiah Naidu was elected as the 13th Vice President in August. The year also witnessed a cabinet expansion- Modi government’s third rejig since it took office in 2014- in September with Nirmala Sitaraman becoming India’s second full-time woman Defence Minister after Indira Gandhi. From a party of just two MPs in 1984, BJP’s march ahead reached a point this year that made an emotional Modi state that the party and its allies now rule in 19 states, one more than the Congress at its peak under Indira Gandhi. BJP rose to power in Uttar Pradesh, Uttarakhand, Goa, Manipur, Himachal Pradesh and Gujarat in 2017. From his historic Israel tour to his sea-plane ride during Gujarat assembly poll campaign, PM Modi continued to be the biggest newsmaker in 2017. At 47, Rahul Gandhi took charge as the President of India’s grand old party on December 16. His mother, Sonia, who served the party as its president for the longest period of 19 years, handed over the baton to him with an emotional note. India rolled out the Goods and Services Tax (GST), known as the country’s biggest tax reform since independence, on the midnight of July 1 with a special event in Parliament. Conceived on the principle of 'one nation, one tax, one market', GST subsumes 17 central and state levies.

The 2G Scam Verdict That Acquitted All The Accused A special CBI court in Delhi acquitted all the accused in the 2G spectrum scam, known as India’s biggest ever corruption case that rocked the previous UPA government, for want of evidence. The scam had come to light after the Comptroller and Auditor General (CAG) in a report held then Telecom Minister A Raja responsible for causing the state exchequer a loss of Rs 1,76,379 crore by allocating 2G spectrum licenses at throwaway prices. The CBI has said that it will appeal against the court verdict.

Doklam Stand-Off Between India and China This summer, Indian and Chinese troops were mired in a 73-day long face off at Doklam, a disputed territory between China and Bhutan. Known as the biggest crisis between India and China in the past 55 years, it even appeared to be pushing the neighbouring countries to the brink of a war. However, in late August, with days to go before Indian PM’s meeting with the Chinese President at the BRICS summit in Xiamen, both New Delhi and Beijing announced a mutual “disengagement” at Doklam. A Pakistan army court awarded death sentence to former Indian naval officer Kulbhushan Jadhav on April 10 accusing him of espionage. This and the many ceasefire violations on the border and Mumbai terror strike mastermind Hafiz Saeed’s political entry kept the tension between India and Pakistan fuming in 2017. Kannada journalist Gauri Lankesh was shot dead on her door step on September 6. Lankesh was known as a fierce critic of the Hindu nationalism in India and her cold-blooded murder by unknown assailants led to widespread protests. In India’s north-east, a four-month economic blockade imposed by the United Naga Council (UNC) in Manipur was lifted on March 19 following a talk the outfit had with the Union and the State governments. Tragedy stuck India after the powerful Cyclone Ockhi hit the country’s southern coast on November 30, leaving over 20 killed and more than 100 fishermen missing in the sea.