It was a year of hardknocks for businessman Adani, and that of promises for Ambani. 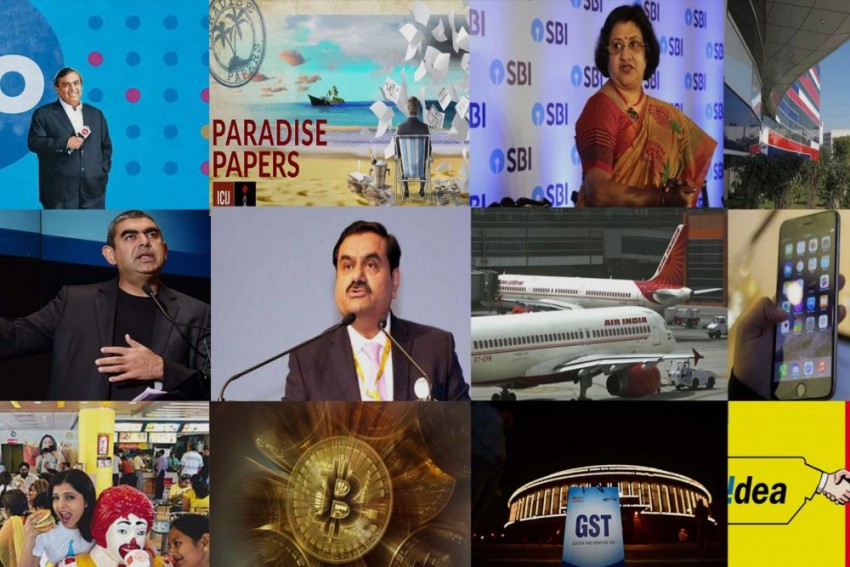 2017 was an 90-degree uphill climb for businesses in India struggling with the impact of demonetization and tax overhaul in the form of GST. It was a year of hardknocks for businessman Adani, and that of promises for Ambani. The year was also crucial for cryptocurrencies which saw an unprecedented jump in value, thanks to a mass hysteria around them by curious buyers and speculators. With the next year just around the corner, Outlook compiles a brief account of the hits and misses on businesses in 2017.

On July 1, 2017, the Indian government announced the Goods and Services Tax (GST) to replace multiple layers of taxation of goods and commodities from its production to delivery stage. Six months after the tax overhaul in the form of GST implementation from the midnight of July 1, this year, businesses are yet to recover from its aftereffects. Multiple cabinet meetings, and GST overhauls did, in some ways, pacify the consumers, by lowering the tax rates, say from 28% (the highest slab) to 18%, from 18% to 5% and so on, but small businesses have not entirely recovered from the transition.

THE RISE AND FALL, AND RISE AGAIN OF BITCOINS

Hype around cryptocurrencies seemed to have engulfed all, from prospective buyers to even the most unassuming of the people. Amidst falling FD and savings rate, cryptocurrencies and more specifically Bitcoins found a curious audience in the Indian market.

Bitcoin recorded its highest ever value, jumping 15 times in less than 12 months.

After hitting a high of $17900, hype around the virtual currency took the internet by storm.

Facing imminent threat from Reliance Jio, older players in the Telecom industry resorted to merging ventures to reduce loss bearing. In March this year, Idea Cellular approved its amalgamation with Vodafone India and Vodafone Mobile Services, a move that is set to create the country's biggest telecom services provider with a customer base of over 394 million.

Another merger made news, that of Bharti Airtel and Tata Teleservices. Bharti Airtel, with a market share of 23.58 per cent and a customer base of 265.85 million is the country's largest telecom player.

The hype and craze builds up with every new model of iPhone. This year, two of them were launched, together with ear-pods. All was going well for the tech giant until later this year, when it admitted to intentionally slowing performance of older iPhones. Two separate lawsuits were filed against Apple, a day after the revelations, with plaintiffs arguing that Apple’s iOS updates were designed to “purposefully slow down the performance speeds” of the phones “fraudulently forcing iPhone owners to purchase the latest model offered by Apple."

On the bright side, Apple iPhone completed 10 years in business this year, launching Apple X at Rs 86,000.

With many outlets of Mcdonald's shutting down across India, due to the bitter fallout between between the fast food major and estranged joint venture partner Vikram Bakshi. the once-upon-a-time go-to place for Happy meals is looking at a bleak future. Nearly all outlets of the fast-food chain in east India have been shut and several others in the north are on the verge of close down due to discontinuation of supplies by its logistics partner.

India's energy giant Gautam Adani couldn't find a supporter in the Queensland govt which vetoed  a plan to give a 900-million dollar concessional loan for the construction of a rail line in the controversy-hit Carmichael coal mine project in Australia, citing environmental concerns. Two major state-run Chinese banks had also refused loan to the coal mining project.

Adani had to subsequently cancel a 2.6 billion dollar contract with Australian mining services company Downer as part of a cost-cutting drive.

More than 700 Indian names, including those of politicians, corporates and celebrities, figured in the leaked 'Paradise Papers' detailing business dealings of "the world's most powerful people and companies" in offshore tax havens.

Infosys co-founder Nandan Nilekani returned as non-executive chairman of the company in August 2017 after then CEO Vishal Sikka resigned as Infosys, once India’s IT pride, started slowly losing its sheen.

In June 2017, the Union Cabinet gave in-principle approval of divestment of Air India stakes as per Niti Ayog recommendations. The move will ease the fiscal pressure on the union government — especially in servicing the airline’s debt burden of Rs52,000 crore.

On April 1, 2017, the State Bank of India acquired five associates and the Bharatiya Mahila Bank to become one of the top 50 international banks in terms of assets.