'There Is A Divisive Politics Going On In India': Rahul Gandhi At Times Square

Gandhi also showed his concerns over the issue of rising unemployment in India and termed it to be the biggest challenge before the country. 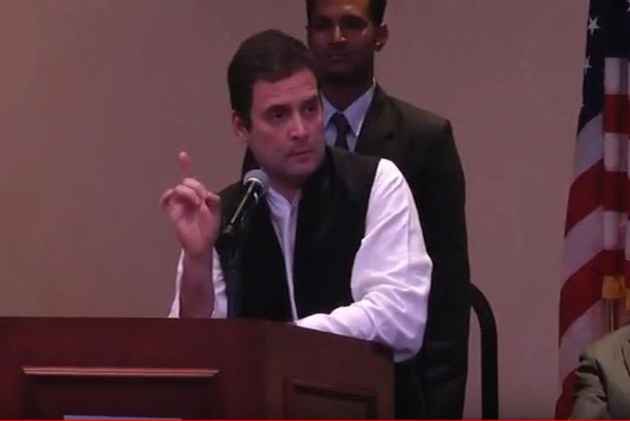 While addressing a gathering at Times Square in New York, Gandhi said that people around the globe are questioning that why tolerance level in India is reducing and where is that harmony which once prevailed.

Asserting that for 1000s of years, India has had a reputation of peace and harmony Gandhi noted that recently few forces which are trying to divide the nation are ruining nation's peaceful image.

"For 1000s of years, India has had a reputation of peace and harmony. There are forces dividing India and ruining our reputation abroad. . And it is very dangerous for the country," he added.

Gandhi further said India comprises of people of various religions and all are living happily because of Congress and its ideas.

"Some people View India as a Piece of Land, But I view India as a set of Idea, we have many religions, many languages, every one of them living happily that is due to the idea of Congress," Gandhi said.

Gandhi also averred that many countries facing violent times are looking towards India anticipating that India has the answer for peaceful coexistence in the 21st century and that is why we cannot afford to lose our most powerful asset.

"The world is transforming and people are looking towards us. China is rising and we have a relationship with the United States. Many countries in a violent world are looking towards India and are saying that maybe India has the answer for peaceful coexistence in the 21st century. So we cannot afford to lose our most powerful asset. Our most powerful asset is that 1.3 billion people lived happily, non-violently and peacefully. India belongs to all of us, and that is what the Congress Party is," said Gandhi.

Gandhi also showed his concerns over the issue of rising unemployment in India and termed it to be the biggest challenge before the country.

"Today the entire focus is on 50-60 really large companies. The biggest challenge India facing today is giving jobs to 30,000 youngsters, who are coming every day to search jobs. But out of 30,000, only 450 get the job. This is the biggest challenge before our country," he said.

Gandhi said that this challenge can be addressed by building a unified approach.

"India simply cannot be able to give a vision, if it is unable to give the job to youngsters. The Congress party has a vision to solve this problem," he added.

Further addressing the gathering Gandhi spoke about agriculture, terming it to be a strategic asset of our country.

Gandhi also spoke about India's opportunity in the healthcare sector and said, "Healthcare is going to transform. There is a huge opportunity for India to be world's healthcare centre, we have to plan for it. I am not only talking about health tourism, I am talking about constructing a system, whereby in the future, large parts of medical processes are carried out in our country."

"Our IITs are excellent institutions, but they are not networks. If we connect our IITs to our industry, businesses across the world, they will start to compete with the best institutions in the world," he added.