"There Isn't Anywhere To Hide"?

Arundhati Roy's first interview after she returned the National Award for Best Screenplay which she won in 1989. 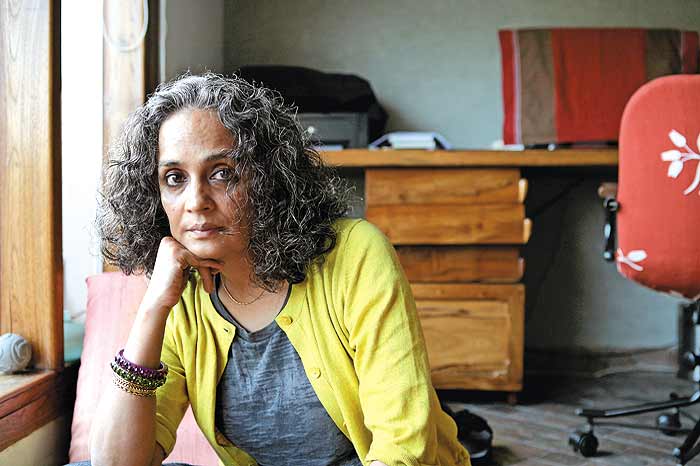 ?Lending support to the writers and filmmakers protesting against "growing intolerance" under the Narendra Modi government, ?writer and activist Arundhati Roy recently announced? ??her decision? to return the National Award for? ??Best Screenplay, which she won in 1989. In her first interview after returning the Award, Roy spoke to BBC Hindi's Radio Editor ??Rajesh Joshi. Excerpts:

Why did it take you such a long time to decide to return the National Award for best script which you got in 1989?

I just felt when people were attacking these writers, sometimes people were using me to attack the writers, saying look she turned down the Sahitya Akademy Award, and you guys accepted it. They were using me to against them. I thought I must do something in solidarity with this movement because to me who has been writing against this sort of thing for a long time returning as award is no big deal. It's just that I did want to express solidarity with what I think is a pretty historical movement. It was not a decision that troubled me or anything at all.

The kind of things that triggered the protests have not happened for the first time; there have been murders and attacks before also. So, what prompted the writers and artists to return their awards this time?

One problem is that the lynching, the murders – this is not the only time it happened. What we are seeing here is an ideology that's putting the wheels in motion. It is changing institutions, it is changing curricula, and it's hollowing out so many things to put in place a very frightening vision. And the murders, the lynching are being justified and being supported in a very frightening way. Of course, it's not the first time but we are seeing a completion of a particular kind of historical cycle where these people are entirely in power without any opposition. They are peopling institutions with their own people, they are rewriting history books. It's a huge machine that's being rewired and reworked and these killings are just the beginning of something very serious.

Who are 'these people'?

I mean the BJP-RSS combine – the ideology of Hindutva which essentially, from 1925, has seen India as a Hindu Rashtra.

The RSS has existed since 1925 but Narendra Modi became prime minister last year. Can you blame the Prime Minister for what's happening?

It's not the Prime Minister; I am talking about a system that's been put in place. Atal Behari Vajpayee was also a member of the RSS. But here you are seeing a massive majority ?- the power that's not opposed? ?in ?any? w?ay. The other thing that I think is very interesting that's happening now is that, like I said in my letter?, it's politics by other means because there isn't a viable political opposition at the Centre. It's also an expression of that despair – you don't have anybody who can step up to the plate and say that we are going to fight you. So, what's happening with the artists and filmmakers is very interesting. I don't think it has a historical precedence.

To be fair to the Prime Minister, he appealed from the ramparts of the Red Fort to put a moratorium on communal issues for the next ten years, still should he be blamed for whatever is happening around?

On the one hand when you become the Prime Minister you have other forces acting upon you. You have international financial institutions; you have big business who wants to create a certain impression and who will insist on certain things being said. And then you have your constituency and your storm troopers who brought you to power, who are speaking a completely different language. What we have to accept that sometimes totally irreconcilable things will be said, like for example, you may say that one of the heroes of the RSS pantheon now is Dr Ambedkar. How can that be? He is a man who renounced Hinduism. Here is the last radical gesture on his part was to renounce Hinduism and become a Buddhist. But, you can say anything anytime - different things at different points.

How do you compare the current situation with when Atal Behari Vajpayee was prime minister? Attacks on Christian missionaries and churches were reported; Graham Steins and his two sons were burnt alive when Vajpayee was in power.

And the pogrom against the Muslims happened in Gujarat in 2002. The thing that must be said in order to be fair to anybody is that there is definitely a systemic problem here, when you have this first-past-the-post type of representation of democracy, that system in itself creating the need to polarize people to create these vote banks. The Congress sowed the seeds the BJP is reaping the harvest. This seed began way back, even before the RSS was formed. The discrepancy between what Tilak stood for and what Gandhi stood for. I am not a great admirer of Gandhi, as everybody knows. It's a process of history that's taking place. Why the writers and filmmakers and academics are doing is important is also because we are all constantly being constricted especially in television studios and in the media into being boxed into the BJP versus Congress equation.

Are you saying Congress and the BJP complement each other?

I think in many ways the Congress has done by night what the BJP does by day. The only difference I would say is that here is an open ideology, boldly stated, that justifies the treatment meted out to minorities, whereas the Congress does it in a sly, hypocritical way. And then, when push comes to shove, you almost get grateful for the hypocrisy, when they are just saying it out straight in the way so many of the BJP spokesmen speak, it's very terrifying. You don't know where to go from here.

Where do you think this groundswell of protests by the writers and artists is going to lead?

I don't think we should make such a big deal out of it. As I have said, awards are not the measure of our work; it's just something to do. It's like expressing solidarity with someone who is trying to do something. I don't think our consciences can be clear by returning awards or not returning awards. I do think that it's interesting that very few writers and artists have in the past taken clear political positions. I am not one of those who hasn't, so to me, when the Congress was in power, they were deploying the paramilitary in the forest of C?h?hattisgarh. They were very much part of creating the tribal vigilante movement – the Salwa Judum – which was burning and killing people. So, I am not about to say that oh, this is some very moral force here. What's happening is that it's forcing people to understand that there isn't any shelter where you say I am just a cultural person, or I am just a writer, just a poet ??– I don’t have anything to do with politics??-- because it's unspooling before you and there isn't anywhere to hide. I think that's interesting. When this government came to power many of us felt that it was going to stay in power for ten years. It all started to unravel pretty quickly – the Delhi elections were a revelation. I don't know what's going to happen in Bihar (the interview was done before the results came out). I think, it's interesting that it's a complicated country and you can't force everybody to march in line even if you threaten them.

But most of the writers and artists are already perceived to be anti-Modi. So, is it such a big deal that they are returning the awards?

The argument coming from the BJP-RSS supporters is – where were you when 1984 riots and other things happened?

A lot of people might not have said anything. A lot of people might not have been political people. The writers will have to deal with that and they have to. I am not saying where were you when the Congress was deploying paramilitary forces in the forest? Or, where were you when the people were being drowned in the Narmada? Even I was not born political – I came to where I am through a journey. There were times things happened, I didn't say anything, I didn't know what was going on maybe I was not familiar with my surroundings. People have their reasons and they will have to answer for those reasons. Personally, I just think that we should stop thinking that the people who massacred the Sikhs and the people who massacred the Muslims are different people. They are the same people, the same impetus. It's just when you think (in terms of) Congress-BJP, that you come to that argument.

Absolutely right. I agree with it. I have written a lot about it. There are different kinds of reactions when an upper caste Hindu is killed, or a Muslim or a Dalit is killed. Atrocities against the Dalits are being committed even now but the reaction has not been that sharp.

Then, why didn't you decide to return the award in protest?

No, no… how is returning of an award going to help? Maybe you haven't read what I have written about these issues. I have written in my writings that Ambedkar said that 'for the Untouchables Hinduism is a veritable chamber of horrors'. He didn't say Hindutva is a veritable chamber of horrors. So, what's happening to the Dalits is so serious. I have written about Gandhi – the entire Left fraternity will start attacking you if you mention his name. I think I should be the last person you should be accusing (of not taking a stand in favour of Dalits).