The CPI(M) described the incident as an example of “Communism phobia”, the BJP claimed that the statue was brought down by people “oppressed” by the Left. 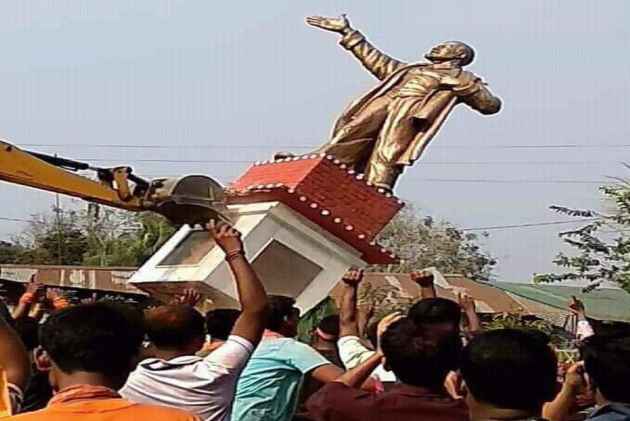 Amid reports of clashes between workers of the BJP and Left in Tripura, the Saffron party workers and supporters allegedly brought a statue of Communist icon Lenin down in state’s Belonia town on Monday afternoon.

The statue stood at the centre of College Square for the last five years, according to The Indian Express. Videos of the incident have gone viral on social media.

The incident happened merely 48 hours after the BJP and its ally dethroned Manik Sarkar’s CPI(M), which ruled the state for 25 years.

The CPI(M) described the incident as an example of “Communism phobia”, the BJP claimed that the statue was brought down by people “oppressed” by the Left.

You can topple Lenin's statue. But can you wipe out #Lenin from the hearts & minds of Shaheed-e-Azam Bhagat Singh & his comrades? #Lenin #Marx #communism inspired our revolutionary freedom fighters. RSS - which mocked those martyrs - can't erase that legacy! pic.twitter.com/BZr1nEjMnq

Highest levels of BJP/RSS and governor of #Tripura are directly inciting this violence in #Tripura.
Shame!#StandByTripuraLeft pic.twitter.com/Ob6a6ntQeg

“Eyewitnesses told me that after the statue fell, its head was dismembered from the body. And then, the BJP workers played football with Lenin’s head,’’ Tapas Datta, CPI(M)’s Belonia sub-division secretary, told the newspaper.

South Tripura superintendent of police Ipper Monchak said the driver of the earthmover, Ashish Pal, was arrested in the evening and let off on bail. “The statue remains where it has fallen. It will be removed by police tomorrow and given to the municipality for storage,” Monchak told the daily.

Local CPI(M) leader Datta said the statue was the only one of Lenin among “some 15-20 across Belonia town installed over the past two decades to beautify the city”. “The others include statues of Rabindranath Tagore, Swami Vivekananda, Vidyasagar and Kabi Nazrul,” he said.

News agency PTI reported  that home minister Rajnath Singh on Tuesday spoke to the state governor and the DGP and asked them to ensure peace till a new government is installed, an official said. There have been reports of sporadic violence and clashes between rival political groups in different parts of Tripura after the election results were declared on Saturday.

During the telephonic calls, Governor Tathagata Roy and DGP A K Shukla apprised the Union home minister about the prevailing situation in Tripura and steps taken to control the violence.  Singh asked the governor and the DGP to check all kinds of violence and ensure peace till a new government is installed in Tripura, the home ministry official said.

NDTV reported the Tripura police said on Tuesday that it has received four complaints of violence from various parts of the state since Monday night.

"The cases include arson at two CPI(M) offices at Sidhai area in West Tripura district, 25 km from Agartala, and clashes between CPI(M) and BJP supporters at Kadamtala in North Tripura district", the Superintendent of Police (Control) Pradip De told PTI.

The CPI (M) tweeted, alleging workers of the Bhartiya Janata party were "spreading fear" in the state.

The tit-for-tat response from the BJP didn’t come as a surprise.

Outlook Magazine had earlier reported that how CPI(M) workers had allegedly dug up a road that led to Sewa Dham, the state headquarters of the Rashtriya Swayamsevak Sangh (RSS)-- located about 15 km outside Agartala--  in last December ahead of a visit by RSS chief Mohan Bhagwat.

“We don’t know who dug it up, but it was done overnight,” said Sudipta Das, a resident.  “We heard that CPI(M) cadres did it. Only the state machinery could have been so quick. There were deep pits that make entry and exit from Sewa Dham almost impossible.”