This Meghalaya Village Has ‘Smart Classrooms’, Access To Clean Water And Toilets

Under the HRDP, a CSR initiative of ‘Parivartan’ which is HDFC Bank’s umbrella brand, more than 750 deprived villages across the country have already been empowered in the last two-and-half years. 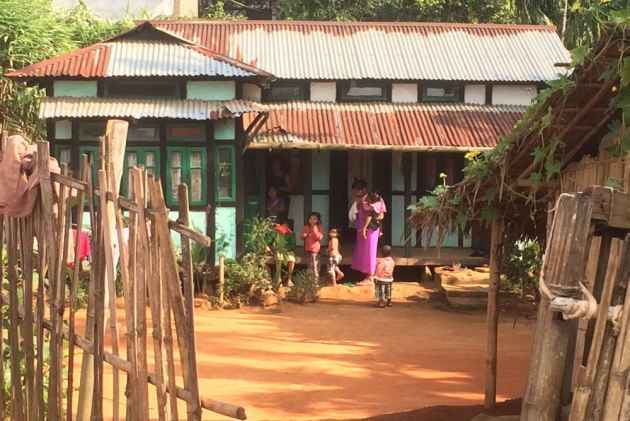 Kril Mangu, 35, a small piggery owner and a ginger farmer is one of the many inhabitants at Umpathaw, a hamlet -- 85 kilometres from Shillong – with around 106 households, who saw a constructive change in his life in the last few months. Mangu gets water supply 24x7. The pigs at his piggery are being bred and once they are grown up, he would sell them for thousands of rupees in markets. He is now planning to send his children to a state government-run school in the village that has a “smart classroom”.

“Before March, we had to walk more than a kilometre to the Umpathaw river to bring water. I saw my children crying for clean water. Now, all the inhabitants have access to clean drinking water throughout the day, thanks to six water tanks set up by HDFC Bank under Holistic Rural Development Programme (HRDP),” Mangu said. Umpathaw village, which comes under Ri Bhoi district in Meghalaya, now has two schools with smart classrooms where students till Class 8 are taught through digital tools.

“About 114 students are studying in the school. The dropout rate has come down drastically from the previous years as students are excited to learn through digital tools. In fact, there are students who come down from far-fetched villages just because of smart classrooms,” Marvelous, an English teacher at Umpathaw Presbyterian Secondary School, told Outlook. Under the HRDP, a corporate social responsibility (CSR) initiative of ‘Parivartan’ which is the bank’s umbrella brand, more than 750 deprived villages across the country have already been empowered in the last two-and-half years. The latest village in this chain is Umpathaw. The bank aims to cover 1,000 such villages by 2019.

"The bank has a board mandate to cover 1,000 such villages by March 2019. This initiative has so far impacted the lives of over 10 lakh people in 16 states across the country," HDFC Bank deputy managing Paresh Sukthankar told reporters while attending the official launch of the programme in the village.

According to him, through this programme the 550 inhabitants of Umpathaw now have access to potable water and their children, smart schools with clean toilets. Last year, the bank spent Rs 305 crore and plan is afoot to raise this to Rs 365 crore this fiscal, Sukthankar said.

Besides, unemployed youths and school dropouts are given an interest-free loan of up to Rs 15,000 to set up shops where they can sell their farm produce, among other items.

The bank has joined hands with around 50 NGOs across India for the initiative. Meghalaya and Assam are the two northeastern states under the programme. In Meghalaya, the bank partnered with two NGOs - SACH and Aroh Foundation.

“Our NGO partners play an instrumental role in planning and executing projects. We work also closely with local communities, who participate in the projects through ‘Shramdaan’, to make the initiative sustainable,” said Pathan.

(The writer was in Shillong at the invitation of HDFC Bank)