The changing times since the Arab Spring have been exciting, though scary; the information intriguing, though often misleading. 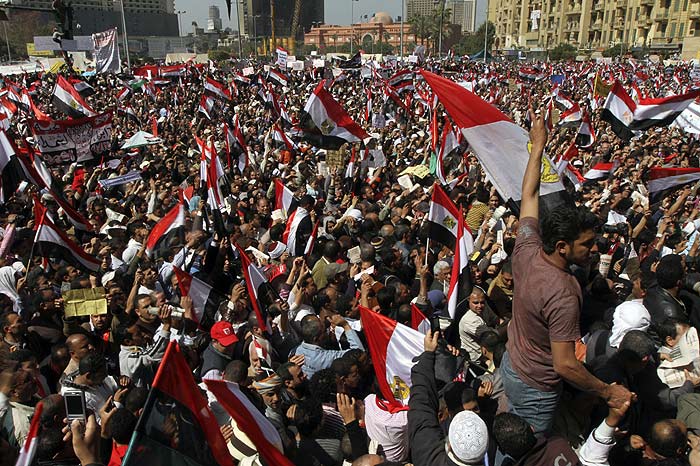 The Arab uprisings are far from over and domestic, regional and international factors will continue shaping and reshaping conflicts within Arab states. The uprisings that began with pushing Tunisian autocrat Ben Ali from power in January 2011 have fostered dizzying levels of activism and a deluge of analyses. The changing times are exciting, though scary; the information intriguing, though often misleading.

Indeed, much of the current analysis revolves around three myths that fail to hold up under closer scrutiny. Revisiting these myths sheds light on recent changes in the Arab world and on where the region may be heading.

Arabs and outsiders alike have heralded technologically savvy youth for engineering the uprisings. They argue that young Arabs used Facebook and Twitter to mobilize people as never before. Certainly, youth-led social media played a role in the uprisings, but viewing the uprisings too narrowly in these terms overlooks the breadth and depth of the popular mobilization.

Many more beside youths poured into the streets expressing longstanding grievances. In June 2012 the Danish-Egyptian Dialogue Institute, DEDI, and the Al-Ahram Center for Political and Strategic Studies, ACPSS, conducted a survey of 1200 Egyptian respondents, above 18 years of age, across 21 governorates excluding border governorates. It found that while youth under the age of 30 were particularly mobilized, they only made up slightly less than half of protesters over age 18. Moreover, Egyptians 40 to 50 years old were highly mobilized during the revolution. Only about 12 percent of this age group claimed they participated in demonstrations before the revolution, while about 20 percent joined the 2011 uprisings.

Similarly, a single-minded focus on social networking technology overstates its role. The DEDI-ACPSS survey finds that just 8 percent of the general population claims they use Facebook, although 26 percent of protesters are Facebook users. Only about one third of the protesters on Facebook say they use the network a lot for political purposes. Similarly, just over one-quarter of Egyptians that participated in the demonstrations during the revolution read blogs, as compared with 8 percent in the general population. Social media played a role. But Facebook and other internet tools did not necessarily drive change. Indeed, most of the countries that witnessed the greatest mobilization in 2011 are among those with poor internet coverage: Egypt, Libya, Syria, Tunisia and Yemen are six of the lowest ranking Arab states in terms of internet usage, according to the International Telecommunication Union.

Viewing the uprisings as the outcome of suddenly mobilized, internet-savvy youth overemphasizes the role of the internet and overlooks the role of older Arabs whose participation was criticual. As Egyptian political scientist and activist Rabab El Mahdi notes – and others examining activism across the Arab world echo – in a forthcoming edited volume tentatively titled Taking to the Streets, this view “ignores a decade of contentious politics and mobilization in Egypt, which paved the way for the January 25th uprising.”

Analysts have also argued that economic problems are at the root of the crisis. According to many, neo-liberal reforms exacerbated longstanding economic problems by stripping citizens of safety nets and shifting profits to an ever-narrower circle of elites close to the regime. These trends combined with high youth unemployment and a frustrating inability to marry and start households to spur the uprisings, analysts argued.

Unemployment rates were and remain high, and inequality was palpable. Egyptians consistently list economic concerns in DEDI-ACPSS surveys. Similarly, Arab Barometer polls have found that Arabs’ support for democracy is often founded on economic considerations more than political liberties. Amaney Jamal and Mark Tessler in Journal of Democracy, January 2008, argue that “economic issues are central to the way that many Arab citizens think about governance.

Yet, issues of dignity and identity also spurred the uprisings. Nearly half of Egyptian respondents claiming to have participated in the revolution did so for reasons related to freedom and social justice; a similarly large percentage did so to end corruption – a goal which combines issues of fairness and economic inequality. And 7 percent said they did so for the purely economic goal of ending unemployment. Calls for “karama” and “hurriya” – dignity and freedom – were as important as bread-and-butter issues.

Debates over identity and freedom thus played a major role in the Egyptian presidential elections. The DEDI-ACPSS survey found that voters were largely unable to distinguish presidential candidates’ positions on the role of the state in the economy, while they had better understandings of each candidate’s position on the relationship between Islam and the state. The survey identified three distinct, views in the population: preferences for no relationship, a moderate relationship and a strong relationship between Islam and the state.

Some Regimes “Survived,” Others Didn’t

Enthusiasm over the Arab Spring quickly gave way to gloomy talk of an Arab Winter. Observers discuss the region in terms of a tally sheet – with countries where regimes fell on one side and those that survived on another. Syria, engaged in a protracted struggle, the outcome of which is still uncertain, remains in the centre.

Such tallies overstate the extent to which old regimes have been swept away. To date, there’s a great deal of variation in change – from Tunisia and Libya, where the old regime was largely removed, to Egypt, where the struggle remains intense, and finally to Yemen, where one can question how much has ultimately changed with the unopposed election of Abdu Rabbu Mansour Hadi. Moreover, in each of these cases, and elsewhere, long and tortuous transition processes continue. There is reason to caution against prematurely declaring the end of regime change – and certainly against claiming success or failure of democratisation.

There is also reason to refrain from proclaiming the long-term survival of regimes which have thus far been spared. The uprisings alter perceptions of what is possible and desirable. The fall of Ben Ali erased the widespread perception that political change was impossible, while the difficult transitions and bloody, protracted conflict in Syria prompt some to question the wisdom of pushing for change. The experiences of neighbouring countries, along with the many regional and international pressures, influence citizens on the sidelines and affect the possibilities of change. Lebanese and Jordanians, for instance, are divided in their views on conflict in neighbouring Syria, and on the potential for change at home. Political rupture remains a possibility in these countries, and elsewhere.

The 2011 uprisings were of unprecedented size and impact, but the discontent was not entirely new nor solely the product of technologically savvy youth. Moreover, the uprisings were mobilized around governance failures that were felt far beyond economic conditions, including issues of national identity and dignity. These issues will play a critical role in the transitions ahead.

Finally, and most importantly, uprisings are far from over. Domestic, regional and international factors will continue shaping and reshaping contestation within Arab states – destabilizing some regimes, strengthening others and contributing to a fluid regional reformation. It’s too early to tell exactly where such changes will lead, but not too soon to know they’ll continue.

llen Lust is an associate professor of political science at Yale University. Her research and publications focus on political participation and governance challenges in the Middle East and Africa, including “Governing Africa's Changing Societies,” co-edited with Stephen Ndegwa. Jakob Wichmann is founding partner of JMW Consulting, which focuses on countries in transition and social and political research. Since January 2011, under the auspices of DEDI and ACPSS, he has facilitated a series of public opinion surveys leading up to the parliamentary and presidential elections as well as worked with a range of Egyptian political parties.Rights:Copyright © 2012 Yale Center for the Study of Globalization.YaleGlobal Online