He smacks the man on the bicycle twice on his head. The man, probably in his late 40s, does not retaliate. 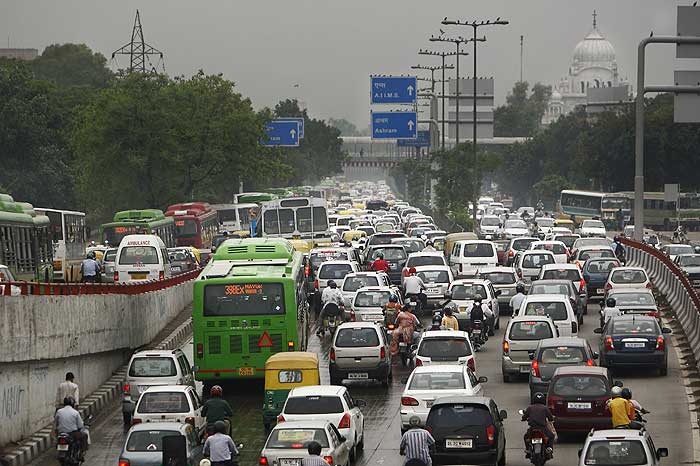 It's a busy Delhi road on a sunny afternoon. A concoction of vehicles pauses at a traffic signal. A couple of shiny cars. A motorbike with two men, the one riding pillion ogling at the woman in the auto parked next to him. Some more autos.

A bicycle makes its way through from somewhere and tries to halt next to a big shiny car. Silver, glittering in the sun. The cyclist has some sort of a load suspended from one of the bicycle handles. He tries to balance as he tugs at the brakes, loses it a little and leans on the shiny, silver car with one hand to steady himself.

The door to the driver's seat flies open and out comes a well-dressed man, complete in a suit and a tie. He clearly went to school and to college, probably business school, where he learnt how to speak some English and earned a degree which landed him a job which made him rich enough to buy a shiny car and nice clothes.

??He smacks the man on the bicycle twice on his head. The man, probably in his late 40s, does not retaliate. In fact, he looks as if he deserves every bit of the public humiliation, apparently for touching a car that he cannot afford. No one around says a word as our suited booted man gets back into his car. They wait for the signal to turn green so that they can get on with their lives.

***
Change of scene. It's a posh Delhi restaurant. Location: Khan Market. It's lunch time and the sophisticated Delhi junta is pouring in for a bite. Tables are filling fast. People in their Sunday best, with their heads behind large over-sized menu cards try to figure out what they want to eat from a list of gourmet dishes the names of which they can barely pronounce.

A young couple walks in — smartly turned out — holding the hand of a two year old. Following them is a girl, barely twelve, carrying a large teddy bear print bag, stuffed clearly with things to keep the two year old entertained. She has been given a clean enough dress to wear and it seems as if she gets dragged along to a lot of dinners and lunches.

The couple find themselves a table and make themselves comfortable — baby on a chair, shopping bags on another. They drag another chair to some distance and ask the girl to sit, not too far though so that she can come and help with the baby when beckoned. The waiters find it hard to move about with the girl sitting in their way. They ask the couple if she can be moved farther away. They agree and the girl is shoved off to some corner where she sits quietly and stares out of the window. Does someone buy her anything to eat? No.

***
A very chatty Delhi autowallah loves talking about his daughter who has just been promoted to the sixth standard. While plying a particular passenger between New Friends Colony and Safdarjung Enclave, he gushes on and on about how bright she is, how good she is at her studies, how she topped her class.

He speaks at some length about all the good things he gets to hear from her teachers and how she says that she wants to become a doctor when she grows up. Then he talks about the hardships and how despite all the monetary constraints, he has admitted his daughter to a good school and not to a government one "jahaan koi padhaaii nahi hoti", because he wants to give her the best he can afford.

And then his voice cracks and his eyes glisten. Apparently she gets mad at him if he goes to her school in his autowallah's wardi. She wants him to go dressed in clothes that other dads wear. She does not want her friends to know what her father does for a living. They would make fun of her. If someone ever asks what he does, she simply says he goes to office. The rest of the details she is unaware of.

The autowallah with a tinge of emotion says, "how does it matter what I do? As long as I do it with honesty and integrity. Why should she be ashamed of me?"

Perhaps some day that little girl will understand the hard work that her father has put into her education and career, that education is not just about white collar jobs, gourmet meals and shiny cars. It is about honesty and integrity and learning how to treat people, even those who are not as privileged as one's self with respect and dignity.

Economic equality maybe a utopian idea. But every human being has an equal claim to a life of dignity — even if they don't have the economic privilege — where she or he is not smacked by some rich bloke wielding a shiny car or made to sit in a restaurant without being offered a glass of water or laughed at because their father is a hard working autowallah.

Hopefully the little girl will understand that, as will other privileged Dilliwallahs.