Bandhan and C.S Ghosh take the next big leap—formal banking 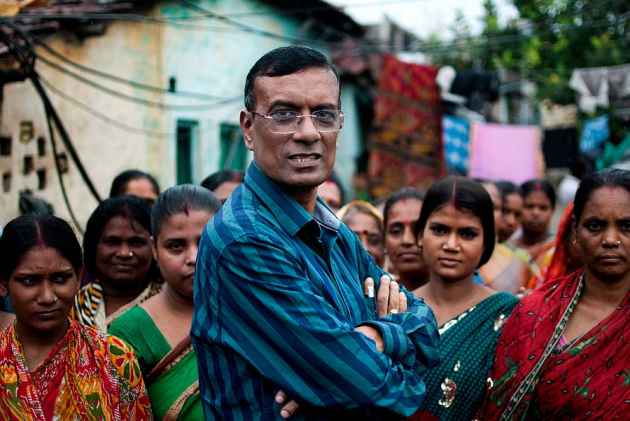 IN the 1980s, Nobel Laureate Muhammad Yunus showed the world that the poor are bankable. In the 1990s in India, basix founder Vijay Mahajan demonstrated it was also possible to bank with the poor profitably. Around the same time, the late business guru C.K. Prahalad turned development economics on its head arguing that India should start looking at the poor as the market and not as beneficiaries. Today, in the new millennium, all eyes are riveted on one man—Chandra Shekhar Ghosh, 54, founder and chairman of Bandhan Financial Services, an NBFC engaged in microfinance services, headquartered in Calcutta, West Bengal.

Ghosh has done the seemingly impossible, wrested one of the two new commercial banking licences issued by the RBI on April 2 this year from among 25 competitors, including corporate giants—a first for any microfinance institution (MFI) in the country. While Ghosh’s feat may have stunned the formal financial sector, those working in the arena of financial inclusion are not surprised. Ghosh is known to put his money where his mouth is.

He had stunned SIDBI (his first funders) with an audacious proposal in 2002, that he would hit 100 branches in three years’ time and notch up a portfolio of 1,00,000 borrowers, at a time when his microcredit operations was reaching only 600 women borrowers through two branches. In 2005, at the inauguration of Bandhan’s 100th branch in Calcutta’s Salt Lake City, Ghosh, riding high on a growth of 611 per cent in a single fiscal, had declared confidently to his 89,000 borrowers: “By 2020, we will be a ‘Bandhan Bank for the Poor’.” He has done it a record six years ahead of time. The NBFC boasts 2,016 branches across 22 states and Union territories, has over 52.33 lakh borrowers, total loans outstanding of `5,704 crore and a staff strength of 13,000.

Born into a refugee family in the erstwhile East Bengal, Ghosh’s father, a small sweet-shop owner, soon recognised his son’s aptitude for mathematics and sent him to study statistics in Dhaka University. In 1985, Ghosh joined BRAC, Bangladesh’s largest non-profit as a field officer in one of the country’s poorest areas.

He returned to West Bengal with insights that helped him script the Bandhan story. The experience he had picked up in the area of resource building for the poor and the then policy environment encouraged him to first start Bandhan as a capacity-building organisation in 2001 and then move on to microcredit operations in 2002. Ghosh’s pride in Bandhan’s achievements in so short a time is apparent when he says: “Bandhan today sports many feathers—it’s highly cost-effective, financially sustainable, has a 100 per cent recovery rate, zero portfolio risk, 100 per cent female membership and many more.” He accords a lot of the credit to ASA a leading MFI in Bangladesh, for helping him craft what is one of the most brilliantly self-reliant models the country has ever seen.

It’s not surprising then that the huge setbacks to the sector, triggered by the Andhra Pradesh MFI crisis of October 2010, did not touch Bandhan. The reason being that Ghosh perhaps is one of the few leaders in the field today who are committed to the ‘triple bottomline’, that mere micro-credit cannot be a solution to poverty alleviation. In short, unlike other MFIs, he has continued to deliver holistic ‘micro-credit plus’ services in areas like health, education, skills development and employability through Bandhan’s non-profit arm. Another first in the sector has been his efforts at ‘inclusive microfinance’-- that is bringing the destitute ‘hard-core poor’, who are normally outside the ambit of MFIs, into the Bandhan fold through customised microcredit-plus aid.

The commercial banking licence was, therefore, Ghosh’s next logical step. “West Bengal is a state of small enterprises, a major part of which are in the informal sector. No business or business plan can succeed or grow on informal finance. You need formal finance and only 10 per cent of our population has access to bank loans. Development should be sustainable, not charitable,” he says.

E xperts in the field agree too. Says former NABARD chairman Y.C. Nanda, “Ghosh has been able to pull this off by sheer dint of his intellect. When at one time all of us tried to warn him about the pitfalls of rapid expansion, he listened to each argument patiently and then proceeded to demolish everyone of them with calculated persistence, faultless rationale and a 100-per cent outcome each time.”

However, now Ghosh will have to deal with a very different set of financial products, says sidbi executive director Brijmohan. The man himself is not unaware of the challenges that lie ahead. Ghosh says: “So far we have engaged in only lending activities. There has been no banking experience. For the moment now we are functioning like a lab and studying the challenges, the foremost at the moment being the training and capacity building of my staff.” Both Nanda and Brijmohan agree, adding that so far he has had experience with only unsecured loans. With his focus on the so-called unbankable, he must now prepare a strategy for a strong, secured loans portfolio. Vipin Sharma, CEO, Access Development Services, and architect of the annual Microfinance India Summit, speaks for the whole industry when he says: “The licence to Bandhan should be seen as the best possible graduation strategy for large MFIs, further helping to legitimise and mainstream this channel.”

As for Ghosh himself, his aim now is to see his success repeated multiple times throughout the financial sector. “If I can focus on a segment that cannot provide security, yet take the risk and prove that it is bankable, I will pave the way for other banks to come forward,” Ghosh says. It is clear that he has once again picked up the gauntlet, ready to now redefine the notion of formal financial services.