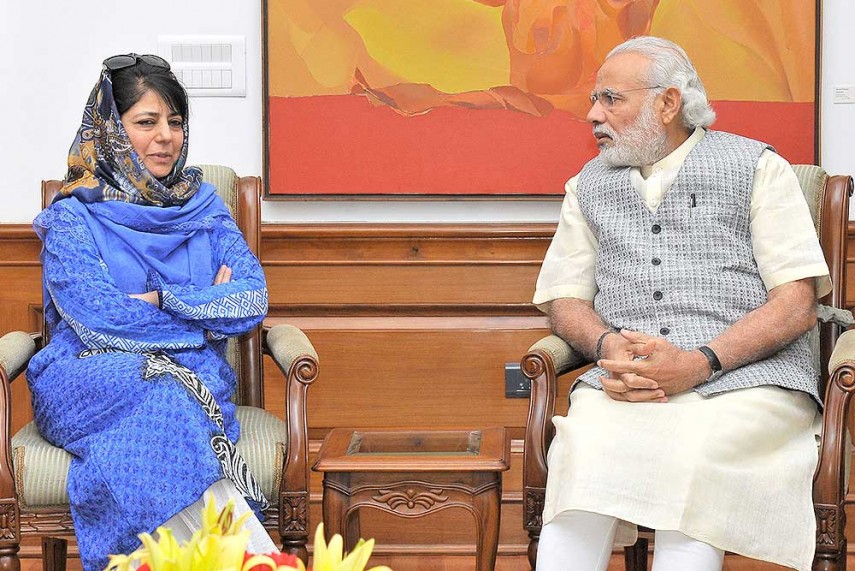 The 'suspense' is over in the stand-off between the PDP and the BJP in J&K. Almost three months after Mufti Sayeed's passing away and after demands for CBMs, timelines on the "Agenda of Alliance" and public reassurances from Prime Minister Modi – demands all unmet – the PDP has exchanged positions with the BJP. After starting off as the party seeking to pressure its partner in the "coalition of opposites" it has wound up falling in line. Whatever the reason for the eleven weeks of acute uncertainty, it cannot be interpreted as a victory. Not a good start for Mehbooba Mufti.

The generous verdict on this development was pronounced in The Hindu's editorial (March 26, 2016). It acknowledged that the PDP "may have come away empty handed" but offered Mehbooba some hope by pointing out that "she can portray herself as a leader who was unwilling to make political compromises for the sake of power". Others are not willing to concede any credit to Mehbooba for breaking the impasse. Arati R. Jerath (The Quint, March 28, 2016) scooped that Prime Minister Modi's uncharacteristic patience with her blow-hot-blow-cold tactics is because of his reluctance to travel to Washington D.C. while J&K State was without an elected government. The Governor and the army are also eager, claimed Jerath, to induct civilian rule as "a buffer to insulate the army from any backlash" and because they anticipate an uptick in militant activity this summer in Kashmir. So much on the PDP's relations with Delhi.

But all politics is local. So what are we to make of the PDP's relations with their main constituency, the Valley? The news is not good.

For starters, throughout the almost three months of limbo, Mehbooba failed to speak to the public. Ironic, because she is known to have had a special rapport with the people, on whose back the PDP was built. In this act she confirmed the behavior pattern of the state's establishment parties: that in Kashmir power flows from acquiescence to Delhi, not from the people. In one fell stroke the Chief Minister-designate showed that her rebel feet were made of clay. One could say it is the result of being in the cockpit of power as opposed to making the party's image. But the chief casualty of this opaque procrastination has been that the party's image in the peoples' perception is no better than it was a year ago and Mehbooba's is worse than it was eleven weeks ago. She has travelled from being between a hard place and a rock to arrive at a place where she is damned if she does and damned if she doesn't. Not an enviable location.

With the PDP opting for the status quo ante, the overwhelming perception is that the last three months have been little more than theatrics; that the party and its leader never intended to abdicate power. PDP supporters argue that Mehbooba will not tolerate indefinite non-delivery on the Agenda of Alliance and that if the delay continued she would call for elections which may restore some of the party's credibility. But the chances of a "come-back kid" performance for the party are remote.

So what is Mehbooba's best hope?

Practical and middle-path advice came from political commentator Naseer Ganai who has argued (DailyO March 26, 2016) that, under the circumstances, the Chief Minister-designate cannot hope to match, politically, the rhetorical panache of former Chief Minister Omar Abdullah; so she had best not try. Instead, he counsels, Mehbooba should emulate Governor N.N. Vohra by delivering on governance. Politically she do what Omar did by pronouncing his faith in his autonomy document; she should pronounce hers in the PDP's "sacred document". In other words, Mehbooba should settle into the pattern of the conventional role of establishment parties.

So it is back to square one for the peoples of J&K. A little over a year ago the PDP, after two months of pondering, forged an unpopular coalition, framed a dubious Agenda of Alliance and promised delivery on both developmental and political fronts. It got very little of the first and none of the second. Today, after an agonizingly silent delay of almost three months, the PDP got less for its stand, has less political capital in hand and plunged Kashmir into more uncertainty.

So what is the lesson to be learned?

The experience of the past year should make one thing clear to both the establishment parties and the Delhi establishment itself: there is no alternative (TINA) to accepting that there is a dispute and initiating internal and external dialogues based on that assumption. To hold the state hostage on development issues unless it toes Delhi's line may work for ephemeral and back channel politics. It does not for principled and transparent politics.

Siddiq Wahid is a political historian and a former Vice Chancellor