Leader of Opposition in West Bengal Suvendu Adhikari and BJP National Vice-President Dilip Ghosh wondered why the TMC was willing to give Rs 5,000 per month to the women of Goa when the party is doling out just Rs 500 to Rs 1,000 for the beneficiaries of Bengal. 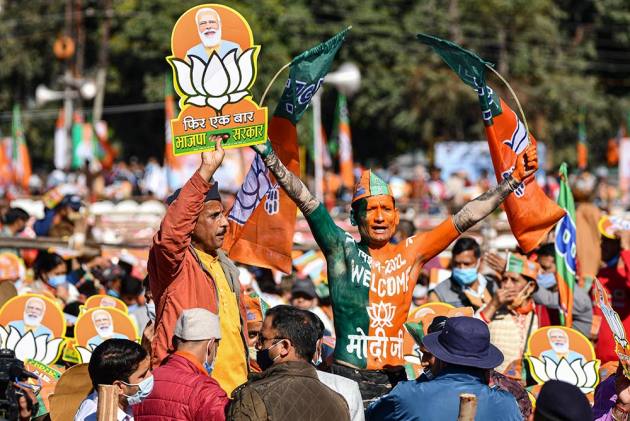 The BJP on Sunday hit out at the TMC over its promise to dole out Rs 5,000 a month to a woman member of a family in poll-bound Goa, stating that the Mamata Banerjee-led camp was giving "false assurance" to people there with an eye on electoral gains.

The saffron party also pointed out that the TMC, however, "did not say much about job generation" in the western coastal state. The TMC on Saturday announced that it will launch 'Griha Lakshmi' scheme in Goa, if voted to power, much like 'Lakshmir Bhandar' in Bengal, and a woman member of every family will be provided an income support of Rs 5,000 per month.

Leader of Opposition in West Bengal Suvendu Adhikari and BJP National Vice-President Dilip Ghosh wondered why the TMC was willing to give Rs 5,000 per month to the women of Goa when the party is doling out just Rs 500 to Rs 1,000 for the beneficiaries of Bengal. "The promise of Rs 5,000 is a false one, made to bag votes in Goa. The TMC will never be able to fulfil it. The party will meet the same fate it did in Tripura. Also, where is this money coming from?

"Strangely, there was no word about generating employment opportunities or addressing livelihood issues of people," Ghosh told reporters. Adhikari said the disparity in the amount promised by the TMC in the two states is "upsetting". "The TMC that gives Rs 500 to 1,000 to our mothers in Bengal is willing to provide Rs 5,000 for every mother in Goa? Isn't it insulting for the womenfolk of Bengal?" he sought to know.

In a similar vein, CPI(M) central committee member Sujan Chakraborty said the "tall talk" by the TMC was aimed at garnering votes. "Also, we oppose this dole politics of the TMC," he added. The state spokesperson of the TMC, Kunal Ghosh, claimed that the BJP was "jealous" of his party's popularity in the western state. "We don't give false assurances. The promises made by the TMC in Bengal are being fulfilled by the party. The BJP is jealous of TMC's growing popularity in Goa," he added.