The sharpest increase in fresh infections was reported from Chennai with 6,484 cases, followed by Chengalpet 1,665, Tiruvallur 893, Coimbatore 863 and Madurai 512, while the remaining was spread across other districts. 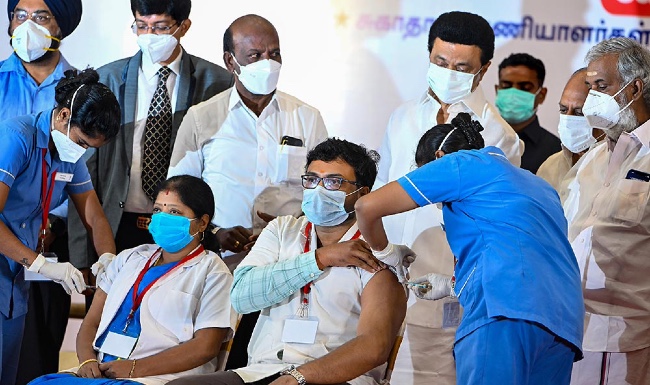 As many as 3,043 people recovered from the disease and were discharged in the last 24 hours, aggregating to 27,17,686 leaving 75,083 active infections. A total of 1,35,672 samples were tested in the last 24 hours, pushing the cumulative number of specimens examined to 5,87,98,470, a Health department bulletin said. Among those who tested positive today included 49 returnees from domestic and overseas locations.

After witnessing a declining trend for several weeks, Tamil Nadu has been reporting new cases on the upward trend since last few weeks. The state had recorded 13,990 new cases on Monday. Meanwhile, talking to reporters, Minister for Medical and Family Welfare Ma Subramanian appealed to corporates to contribute towards purchase of pulse oximeters under their corporate social responsibility initiative.

After distributing pulse oximeters to more than 10 Covid-19 patients detected in an apartment in Thiruvanmiyur in the city, he urged corporates to come forward and support the government in this cause. "We have commenced distribution of these pulse oximeters to Covid-19 patients. It will be given to patients identified in cluster areas. Today in one apartment we have identified 10 Covid-19 infections," he said.

"Those infected by the contagion and are in home isolation would be asked by tele-counsellors to check their oxygen pulse rate and inform them on daily basis. The counsellors will be offering guidance to such patients based on the oxygen pulse rate," he said. The government would be distributing such pulse oximeters to those people identified in 'cluster areas', he said.

To a query, he said that 168 volunteers and doctors have been roped in to provide tele-counselling to the patients covered under the 15 zones in Chennai. On the vaccination of those in the 15-18 years age group, the Minister said the department has almost completed nearly 90 per cent of students studying in schools. "The remaining are those who are studying in ITIs (industrial training institutes) or in polytechnic colleges...," he said.

Subramanian recalled his earlier comments that 85 per cent of the cases in Tamil Nadu was detected as 'Omicron' while remaining 15 per cent as 'delta' variant of Coronavirus. On the status of Omicron cases in Tamil Nadu, he said the department was not collecting the details of Omicron cases in the state as the samples of those identified with 'S' gene drop variant of Covid-19 are sent to National Institute of Virology, Pune and before the results were officially out, the patients were getting discharged in the state.

"We are not collecting them separately, because before the results are declared, the patient gets discharged...Even if the samples we collect from cluster areas, we have identified them to be of 'S' gene drop variant indicating Omicron. But, before we receive the formal report from National institute of Virology, Pune, the patient gets discharged after recovery," he said.

As of Tuesday, there were 185 Omicron cases of which 179 discharged while the remaining six have been cross notified to Kerala, Puducherry and Andhra Pradesh, the bulletin said.