The minister for Medical and Family Welfare Ma Subramanian said 12 people detected with the Omicron variant in the state have been discharged from hospitals in Chennai, Tiruchirapalli and other cities after recovery, taking the 'active' Omicron cases in Tamil Nadu to 22. 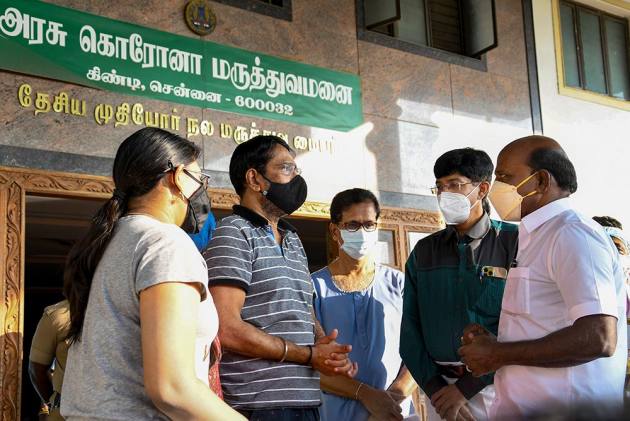 The random tests done on passengers arriving from 'non-risk' countries at all four international airports in Tamil Nadu would be ramped up from two per cent to 10 per cent from tomorrow, following an increase in the number of people detected with the 'S gene' drop, a possible indicator of the Omicron variant, the state government said here on Saturday.

The minister for Medical and Family Welfare Ma Subramanian said 12 people detected with the Omicron variant in the state have been discharged from hospitals in Chennai, Tiruchirapalli and other cities after recovery, taking the 'active' Omicron cases in Tamil Nadu to 22. Talking to reporters after inspecting the facilities at the Rajiv Gandhi Government General Hospital here, he said the government has written to the Centre, seeking a fresh set of guidelines to test international passengers arriving from both 'high risk' and 'non-risk' countries.

"The Centre is yet to respond to our letter. But as a preventive measure, from tomorrow onwards it has been decided to conduct tests on 10 percent of passengers arriving from 'non-risk' countries as against the current practice of randomly selecting two per cent of the passengers'', he said. Subramanian said the Omicron variant can spread fast in crowded places and appealed to hotels and pubs to avoid conducting New Year celebrations. In another significant development, the Minister said 39 persons who had come in contact with doctors, nurses and medical workers at the Rajiv Gandhi Government General Hospital have been detected with the 'S' gene drop variant of COVID-19.

He said a doctor who performed a surgery on a patient on December 17 has tested  positive, following which 3,038 of his 'direct' and 'indirect' contacts were tested, of whom 54 contracted COVID-19. "Of the 54 people, 39 have been detected with the 's' gene drop variant. Their samples have been sent to the National institute of Virology, Pune for genomic sequencing analysis. All the patients are asymptomatic and are doing well", he said.

To a query on Tamil actor Vadivelu testing COVID-19 positive, he said RT-PCR tests done on both the actor and film director Siraaj at the international airport here on their return from the United Kingdom had confirmed it. "They have been admitted to the Sri Ramachandra Medical College Hospital. Both have been detected with the 'S' gene variant, following which their samples were sent to the National Institute of Virology, Pune for genomic sequencing analysis. Both are asymptomatic and are doing well", he said.

The minister said the 16th edition of the state-wide Mega Vaccination Camp would be held on Sunday and urged the 94 lakh people eligible to receive the second dose of vaccination to make use of the opportunity and take the jab. "In Tamil Nadu, 85 percent of the people have received the first dose and 55.8 percent, the second dose," he said.