The year 2017 has been an exciting year for motorcycling enthusiasts. Before we bid this year goodbye, let's take a look at the top five motorcycles launches. 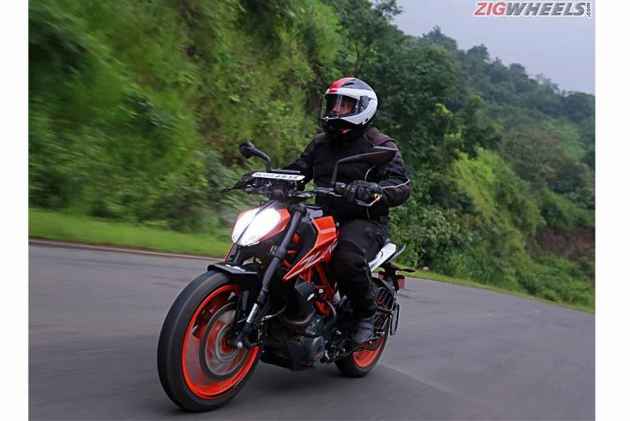 The KTM 390 Duke was launched in March 2017 and looks the part with design cues inspired from the Super Duke R. It almost looks like a concept brought to life and the all-LED headlight and colour TFT screen are the biggest highlights.

The 373cc, liquid-cooled, single-cylinder motor is carried over from the earlier generation 390 with no change in the power output of 43.5PS. The torque figure, however, has been bumped up by 2 Nm and is 37Nm now. The motor also feels a lot more refined and reactive to throttle response now. The 6-speed gearbox also comes with slipper clutch for quicker downshifts.

The new 390 feels a lot more agile and sharper to handle and gets WP front USD forks with a WP monoshock at the rear.

The front 320mm and rear 230mm discs come with ABS as standard. The ABS comes with 3 settings – Active, Supermoto (ABS for rear wheel gets disengaged) and Off.

The new 390 Duke retains the manic nature of the earlier model, yet comes across as a more civilized bike than before, and is priced at Rs 2.36 lakh (ex-showroom, Delhi). 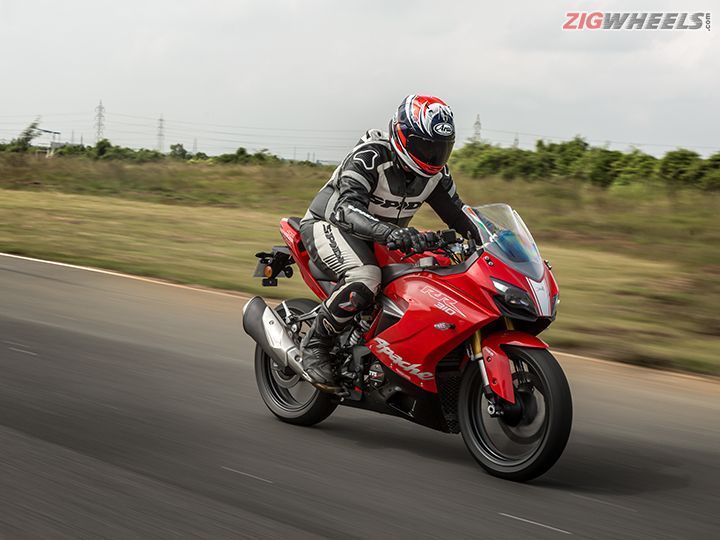 TVS launched the all-new Apache RR 310 in India this month at Rs 2.05 lakh (ex-showroom), The RR 310 is the new flagship offering and puts the company on the map of entry-level sports bike of India.

The TVS Apache RR 310 looks striking, and yes, the design is not only appealing but also purposeful as seven different fairings were tested in wind tunnels for aerodynamics, with multiple circuit tests to perfect its riding dynamics and handling characteristics. The Apache RR 310 gets dual LED headlamps with LED DRLs that give it an aggressive front face. It also gets a vertically laid out all-digital instrument console that also includes a lap timer, which despite the cluttered look, is clearly legible. The bell-shaped LED tail lamp also looks unique and goes well with the overall styling of the motorcycle.

The Apache RR 310 is powered by the same 312.2cc single-cylinder, liquid-cooled motor derived from the BMW G 310 R. Even though there is no change in the power and torque output, it’s produced 200rpm earlier in the rev range. The 34PS of peak power and 27.3 Nm of peak torque is transferred to the rear wheel via a six-speed gearbox.

The alloy wheels, exhaust system, golden-finished KYB front forks and rear monoshock are shared with the BMW G 310 R and are set up on the stiffer side. The bike also features a trellis frame with a bolt-on subframe. The TVS Apache RR 310 also gets a 300mm front disc and a 240mm rear disc brake with dual-channel ABS. 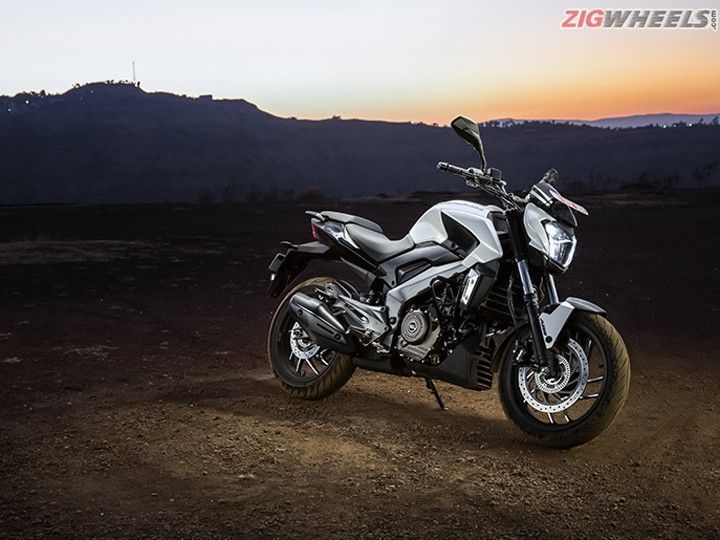 Launched in January 2017, the Bajaj Dominar 400 is the most powerful motorcycle offered by the Pune based manufacturer. The Dominar doesn’t look like anything else in the segment today, carrying some inspiration from the Ducati Diavel. The most attractive bit on the Dominar is the all-LED headlight. Fit-finish levels are also far better than what is seen on other Bajaj models.

At the heart of the power cruiser is the 373cc, single-cylinder, liquid-cooled motor that powers the KTM 390 Duke. However, it's been detuned to feel more relaxed and suited to the role of cruising long distances with ease. As a result, the motor develops a peak power of 35PS and peak torque of 35Nm, which is transferred to the rear wheel via a slipper clutch-operated 6-speed gearbox.

The 43mm telescopic forks up front and the rear monoshock have been set up on the stiffer side. The 320mm front and 230mm rear disc brakes come with ABS as an option.

If you are looking for a comfortable, fast and affordable cruiser, the Dominar is worth looking at. The standard variant costs Rs 1.42 lakhs and the ABS-equipped variant costs 1.56 lakhs, both ex-showroom, Delhi 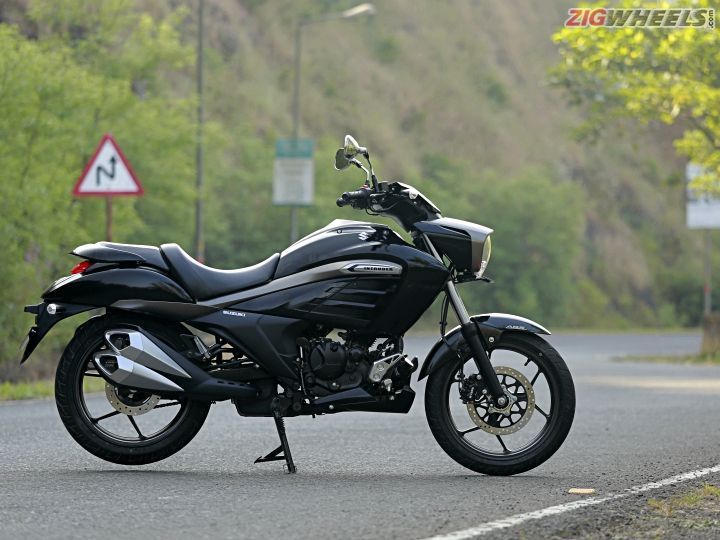 The smallest Intruder looks quite striking and unique. Whether it appeals to motorcyclists is clearly subjective as its unlike anything else in the segment. The headlamp draws inspiration from the larger sibling and comes with a halogen bulb along with LED DRL. The digital instrument cluster is derived from its cousin, the Gixxer, and while the fuel capacity is just 11 litres, the superimposed plastic cowl wrapping the bike gives the impression of it being a much larger and powerful motorcycle. The split exhaust seems a bit overdone though.

Powered by the same 155cc, air-cooled, carbureted, single-cylinder engine seen on the Gixxer, the Suzuki Intruder 150 produces 14.1PS of max power at and 14Nm of peak torque. The engine is mated to a five-speed gearbox.

The chassis and suspension too have been carried over from the Gixxer. Braking is managed by a single disc setup at both ends, with the safety net of single-channel ABS at the front. 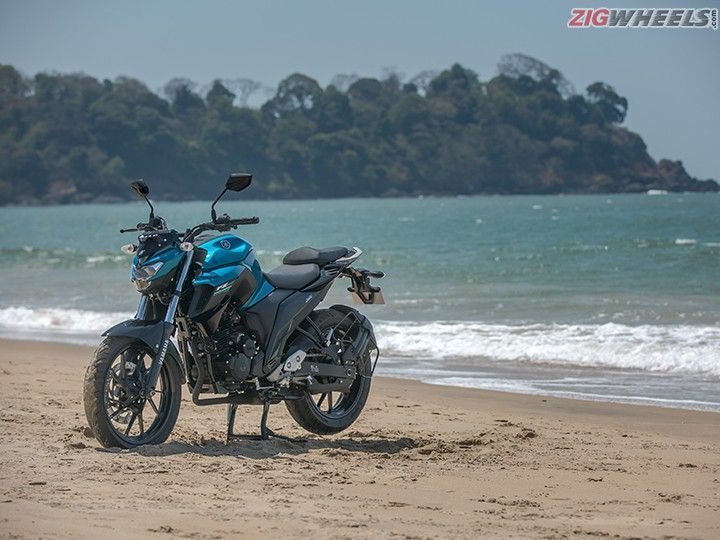 Yamaha launched the FZ25 back in January. It's the most powerful Yamaha built in India and is priced at Rs 1.19 lakh (ex-showroom, Delhi). The Yamaha FZ25 has a muscular and chiselled styling that stays true to the FZ’ styling cues.

The masculine and sculpted body lines will be appreciated by many, with the key highlight being the LED headlight, which otherwise doesn’t feel bright enough during the night. The stubby exhaust also seems to be inspired from the Yamaha FZ Version 2.0, but is beefed up to better match the overall larger proportions. The FZ25 also gets a digital instrument panel, which also showcases instant fuel economy and average fuel economy.

The Yamaha FZ25 is powered by an oil-cooled, 249cc, fuel-injected, single-cylinder engine with Yamaha's patented Blue Core technology. It produces a peak power of 20.9PS and 20Nm of peak torque, all of which is transferred to the rear wheel via a slick 5-speed gearbox.

Suspension duties are handled by telescopic forks up front and a monoshock at the rear. Braking is kept in check by a front 282mm disc and a 220mm disc at the rear.