Rajasthan Chief Minister Ashok Gehlot said the rally will pave the way for the downfall of the NDA government. 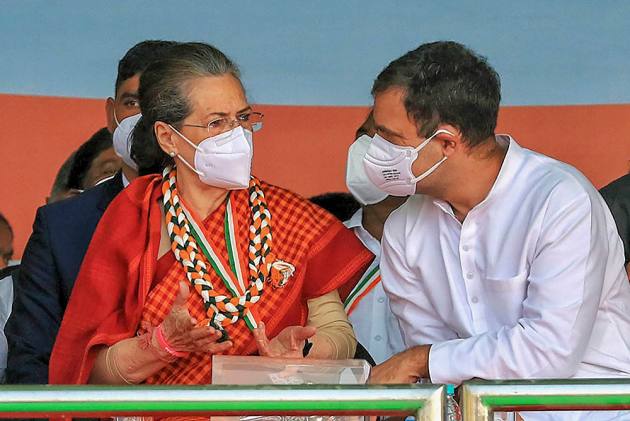 Sonia Gandhi and several top Congress leaders attended the Jaipur rally, held as a show of strength by the party just months ahead of the Assembly polls in five states. Party leaders hoped that the rally held against rising inflation will send a strong message against the Narendra Modi-led Union government.

Earlier in the day, Sonia and Rahul arrived in Jaipur on a chartered flight while Priyanka reached by road. Huge cut-outs of Sonia, Rahul and Priyanka were erected in the stadium where Congress workers were seen waiving party flags and raising slogans in support of the leaders.

Party workers from all over Rajasthan, Haryana, Madhya Pradesh and Chhattisgarh attended the rally. Addressing the rally at the jampacked the Vidhyadhar Nagar stadium, party leaders said it will send a strong message across the country against the Narendra Modi government and the BJP.

Rajasthan Chief Minister Ashok Gehlot said the rally will pave the way for the downfall of the NDA government. He said it was for the first time after the Independence that a national rally was held outside Delhi. Earlier, this rally was scheduled to be held in Delhi but the party shifted it to Jaipur after the denial of permission.

Congress Working Committee member and former MP Raghuveer Meena alleged the permission for the rally was denied at the "behest of PM Narendra Modi". "Party workers in lakhs have come here. Looking at the enthusiasm, it seems that the countdown has started for both Modi government," AICC general secretary in-charge for Rajasthan Ajay Maken said addressing the rally.

A brief live performance on a song of Bollywood movie, "Bhaag Milkha Bhaag", was held at the end of the rally.