A key government advisory panel overwhelmingly rejected Biden's plan to give COVID-19 booster shots across the board and instead recommended the extra vaccine dose only for those who are age 65 or older or who run a high risk of severe disease. 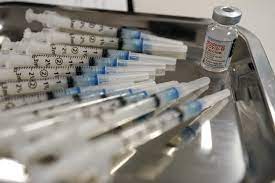 Just one month ago, President Joe Biden and his health advisers announced big plans to soon deliver a booster shot of the coronavirus vaccine to all Americans. But after campaigning for the White House on a pledge to “follow the science,” Biden found himself uncharacteristically ahead of it with that lofty pronouncement.

Some of nation's top medical advisers on Friday delivered a stinging rebuke of the idea, in essence telling the White House: not so fast.

A key government advisory panel overwhelmingly rejected Biden's plan to give COVID-19 booster shots across the board and instead recommended the extra vaccine dose only for those who are age 65 or older or who run a high risk of severe disease.

Biden's Aug. 18 announcement that the federal government was preparing to shore up nearly all Americans' protection had been made with great fanfare. It was meant to calm the nerves of millions of Americans fearful of a new, more transmissible strain of the coronavirus.

“The plan is for every adult to get a booster shot eight months after you got your second shot,” Biden said, noting that his administration would be ready to begin the program on Sept. 20.

Biden added the qualification that third doses would require the signoff of health officials at the Food and Drug Administration and the Centers for Disease Control and Prevention, but his public message glossed over the nuance.

“Just remember,” he said, “as a simple rule: Eight months after your second shot, get a booster shot.”

Biden's plan drew immediate outrage from global health groups that encouraged the United States and other well-off nations to refrain from administering boosters until poorer countries could provide first doses to their most vulnerable citizens.

“Viewed from a global perspective, this is a squandering of a scarce global resource, as a consequence of which people will die,” said Dr. Peter Lurie, president of the Center for Science in the Public Interest. “I feel completely comfortable saying this,” he added, acknowledging that domestic political considerations weigh differently on presidents.

The Biden plan was criticized, too, by medical professionals, who cited a lack of safety data on extra doses and raised doubts about the value of mass boosters, rather than ones targeted to specific groups.

“It created enormous pressure on the agency to go along with what the White House wanted,” said Lurie, who characterized the FDA panel's decision as a “rebuke” of Biden's efforts to circumvent standard procedures. “That's what we're trying to get beyond after the Trump era.”

“Following them has served FDA very well when they've done that,” he added. He contrasted the expeditious authorization of the vaccines to the agency's brief flirtation with unproven COVID-19 treatments such as the malaria drug hydroxychloroquine during the Trump administration. “When they've strayed from it, they've got in trouble.”

The nonbinding recommendation from the outside experts who advise the FDA is not the last word. The FDA will consider the group's advice and make its own decision, probably within days. The CDC is set to weigh in next week.

One of the FDA's advisers, Dr. Paul Offit of Children's Hospital of Philadelphia, told reporters after the meeting that while the Biden administration had planned for boosters for the general population, “that's not this. This is, We're going to test the water one foot at a time.'''

The committee “parked all of that stuff and did their job,” said Norman Baylor, former director of the FDA's office of vaccine review. “I'll be very frank here: I think this meeting was rushed. I would say it should have happened later,” so that the FDA had more data to make the decision.

White House allies defended the administration's aggressive preparation for the boosters, which has included regular messaging from doctors about their necessity and bolstering the federal stockpile of doses.

They argue that the American people elect a president, not a scientist, to act in their best interests. They reason that the alternative — holding off on preparing for boosters until federal health officials give the green light — could have cost lives.

The U.S. surgeon general, Dr. Vivek Murthy, told reporters before the panel's vote that the administration was aiming to be transparent with the public about the promise of boosters providing enduring protection and was not trying to pressure regulators to act. He said the administration also wanted to be prepared in the event the boosters were approved.

“We have always said that this initial plan would be contingent on the FDA and the CDC's independent evaluation,” Murthy said. “We will follow that evaluation and their recommendations, we will make sure our final plan reflects it.”

“What we were doing in August and we continue to do there is really prioritizing transparency and preparation,” he added.

Administration officials noted that the experts' recommendation Friday probably would result in boosters for people most likely to get them anyway had the entire population been give the go-ahead. Seniors were in the first group of Americans to be eligible for vaccination after their authorization last December, followed by those with preexisting conditions that put them at higher risk for serious disease. Those populations account for tens of millions of Americans, officials said.

After Friday's voting, the White House tried to put the advisory panel's action in a positive light.

“Today was an important step forward in providing better protection to Americans from COVID-19,” said White House spokesman Kevin Munoz. “We stand ready to provide booster shots to eligible Americans once the process concludes at the end of next week.”

Dr. Leana Wen, a former Baltimore health commissioner who comments regularly on the pandemic, said the decision about boosters "is not just one of science. It's one of values.”

“Because when we're considering issues like should additional doses go to Americans or people around the world, that is not the right decision for a scientific regulatory committee,” she said. “That is up to the president of the United States.”