Fred, Edinson Cavani and Mason Greenwood struck in the second half as Manchester United edged out Tottenham in a pulsating top-flight clash 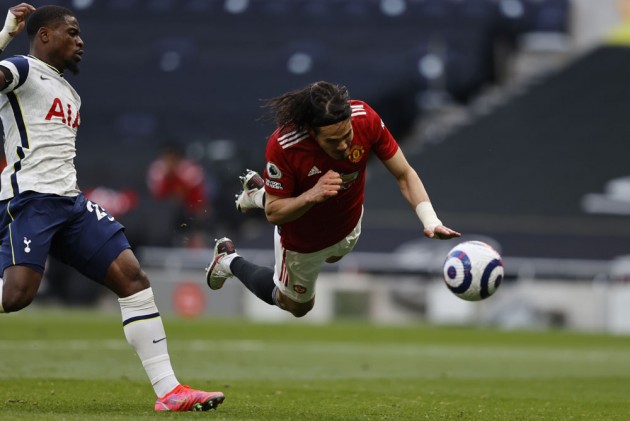 Edinson Cavani shrugged off first-half VAR disbelief to head the winner as Manchester United stretched their unbeaten Premier League away run to 23 games with a 3-1 victory over Tottenham.

Spurs went ahead five minutes before half-time when Son Heung-min slotted home, just moments after Cavani's strike had been ruled out for a soft-looking foul by Scott McTominay on Tottenham's South Korean forward.

United were raging about the decision, but they bounced back in style in the second period with goals from Fred, Cavani and Mason Greenwood.

The result moved second-placed United seven points ahead of Leicester City, who sit third, while Spurs remained in seventh, six points away from a Champions League qualification spot.

23 - In English top-flight history, Manchester United’s current 23-game unbeaten run away from home in the league (W15 D8) is bettered only by a 27-game run from Arsenal between April 2003 and September 2004. Relentless. pic.twitter.com/0zdqkknY5A

After a dismal opening half-hour, the game burst into life before the interval.

Cavani thought he had put United ahead with their first shot on target in the 33rd minute, but the strike was ruled out for McTominay flicking out a hand at Son, the decision reached following a long wait after referee Chris Kavanagh was encouraged to review the incident on the pitchside monitor by VAR. Cavani looked astonished to be denied.

Spurs took full advantage of that reprieve after 40 minutes, Son turning home Lucas Moura's low cross from the right at the back post after Victor Lindelof failed to cut out Harry Kane's pass to the Brazilian.

United started the second half with a spring in their step and drew level after 57 minutes.

Hugo Lloris kept out Cavani's initial strike after a slick move, but Fred reacted quickest to fire home his first goal of the season from inside the six-yard box.

Dean Henderson then kept out Son soon after, while Lloris got down well to tip Bruno Fernandes' long-range drive around the post at the other end.

Cavani put United ahead in the 79th minute, stealing ahead of his marker to bury a superb diving header past Lloris from Greenwood's inviting delivery.

The Uruguay international saw an attempted headed clearance crash back off his own post in the closing stages, before Greenwood added gloss to the scoreline deep into stoppage time, firing past Lloris at his near post after being teed up by the impressive Paul Pogba.

What does it mean? Revenge is sweet for Red Devils

Speaking ahead of the game, Solskjaer said he was "pretty, pretty sure" his players would have a point to prove following their 6-1 thumping by Spurs at Old Trafford earlier in the season. He was right.

The Red Devils were poor in the first half, but they roared back in style after the interval to extend that superb away run, which only Arsenal between April 2003 and September 2004 (27 games) have bettered.

Cavani proves his worth

Speculation is rife that Cavani will move on at the end of the season, but he showed here why United should do everything they can to keep hold of the 34-year-old. He put aside his disappointment at seeing a fine strike chalked off in the first half to power home late on, with only Everton's Dominic Calvert-Lewin scoring more headed goals in the Premier League this season (six) than the Uruguayan's five.

This latest capitulation will do little to dampen talk that Mourinho is not the right man to lead Tottenham. The Portuguese has now suffered 10 league defeats in a single season for the first time in his managerial career, while Spurs have failed to win a league-high seven Premier League matches this term in which they were leading at half-time.

United face Granada at Old Trafford on Thursday in the reverse fixture of their Europa League quarter-final tie, with Solskjaer's side holding a 2-0 lead from the first leg. Spurs, meanwhile, travel to Everton in the Premier League on Friday.