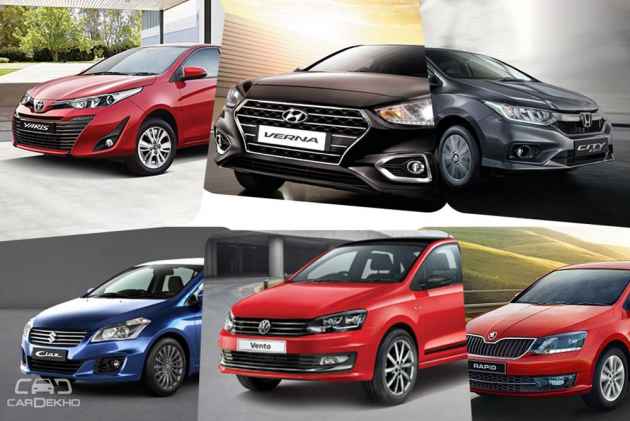 Toyota is going to launch the Yaris in India in the month of April. The Japanese manufacturer's Honda City-rival will also take on other popular sedans in this segment like the Hyundai Verna, the Maruti Suzuki Ciaz, Volkswagen Vento and the Skoda Rapid. If you have already finalised on buying the Yaris, well, you can click here to know more about its bookings that are already underway.

But if you're still wondering how it fares against its rivals on paper, we have got the answer. *Singapore-spec Yaris used for reference. We expect no major changes in dimensions of the India-spec Yaris

The Toyota Yaris won’t set any new standards when it comes to exterior dimensions. It’s neither expected to be the longest nor the tallest car in its segment, but will be at par with the widest car in the segment, the Ciaz.That said, it might have the shortest wheelbase amongst competition. While that might result in the least legroom inside the cabin, we’ll save the judgement until we test it.

We saw the India-spec Yaris first at the Auto Expo 2018, and here’s what we feel about its looks and design. Transmission duties on the Yaris will be handled by a 6-speed manual or a CVT with paddle shifters. Other cars in this comparison are also offered with both manual and automatic transmission options.

Both the Yaris and the City get CVT with paddle shifters, while the Verna, Ciaz and the Rapid are available with a torque converter unit. CVTs are more fuel efficient than torque converters, in general. The Honda City, equipped with a CVT, returns 18kmpl, which is more than its manual version by 0.6kmpl. Hence, we expect the Yaris to deliver manual-like fuel efficiency figures in its automatic avatar.

The Vento is the only petrol-powered automatic car in this segment that gets a dual-clutch automatic transmission. Its 7-speed DSG gearbox is mated to the 1.2L TSI engine. A dual-clutch transmission is widely regarded as more technologically advanced compared to CVTs and torque-converters. Having two clutches not only quickens the gear shifts but also makes the transition from one gear to another smoother. Even though the entire feature list isn't out yet, Toyota has revealed a few goodies the Yaris will get. The Yaris will pack some segment-first features like front parking sensors, power-adjustable front seats, 7 airbags, tyre pressure monitoring system and roof mounted rear AC vents.

All cars in this comparison get features like touchscreen infotainment system, climate control, rear parking sensors, and alloy wheels in the top variants. The Yaris will also follow suit as suggested by the VX variant showcased at the Auto Expo. The City and the Verna are currently equipped with 6 airbags in their top variants, but the Yaris will trump that by offering 7. Sunroof, a feature that might not be the most practical but is still sought-after in India, might not be on offer on the Yaris. So, the City and the Verna will continue to be the only cars in this segment to get a sunroof. We expect Toyota to price the Yaris in the range of Rs 9 lakh to Rs 14 lakh. At that price, the Yaris might be the most expensive car of the lot but it is expected to pack a long list of features to justify the premium.