Tractor As New Symbol Of Mass Protest: Iconic Images And Props Of Dissent

The tractor became a representation of possible exploitation, depravity, frustration, and anger among the millions, who till the land to feed a nation

There are two images that are likely to be permanently etched in the minds and hearts of this generation. Both are from the ongoing, but controversial, farmers’ protests against the three farm acts.

The first is obviously the Sikh’s Nishan Sahib flag fluttering next to the national tricolour at the Capital’s Red Fort. The second, more charming and varied, are the photographs and videos of how the tractor was used as a symbol of a mass protest. 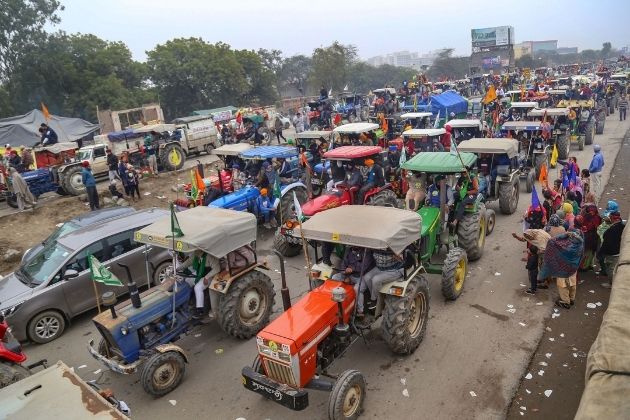 Remember, for years, and until recently, the tractor, like your large, spacious, and jazzy car, was a mark of riches and wealth. Only the rich farmers could afford to buy one, or more. It was a figure of a useful product that signified ostentatious consumption in some ways.

However, in the current protests, the tractor became a representation of possible exploitation, depravity, frustration, and anger among the millions, who till the land to feed a nation. Of course, it was also a figure of violence, of hatred against ruling regimes.

On January 26, 2021, tens of thousands of farmers from far-flung areas took to Delhi’s streets, tussled with the police, and damaged public property, even as the security forces used batons and tear gas to push them away. In those ghastly hours, one of the tractors removed a bus that was used as a barrier. A tractor overturned, and killed a farmer too.

But, over the past few months, the tractor also emerged as a symbol of peaceful protests, new form of urban living on the highways, and rural culture. Thousands of tractors, for example, participated in several rallies to show their angst against the farm laws.

Plastic sheets, tarpaulin, and cloth were laid over them so that they acted as temporary residences for the farmers, who shivered in Delhi’s cold and rain to stay put at the various border areas. People gathered around the vehicles to entertain themselves before they went to sleep.

The use of a tractor is not unique. In the past, both in India and globally, various photographs and objects became the icons of mass rallies to change the situations on the ground. Remember the candles used in the recent past to fight injustices of several kinds, and pray for martyrs.

Anna Hazare’s movement against corruption led to the popularity of a particular cap. Umbrellas became the objects to define the recent sit-ins in Hong Kong, and yellow shirts in Paris. Of course, we know about the tridents, bows and arrows, and other war equipment that signified and dignified the Ram Janam Bhoomi movement.

Photographs and even hashtags in this age of social media are used. The second includes the famous #metoo, among others, like the celebration of a decade of Arab Spring revolutions. The Bhopal gas tragedy victims used a news photograph of a child’s face that was being buried. Protesters printed the picture on pieces of cloth, and covered themselves.