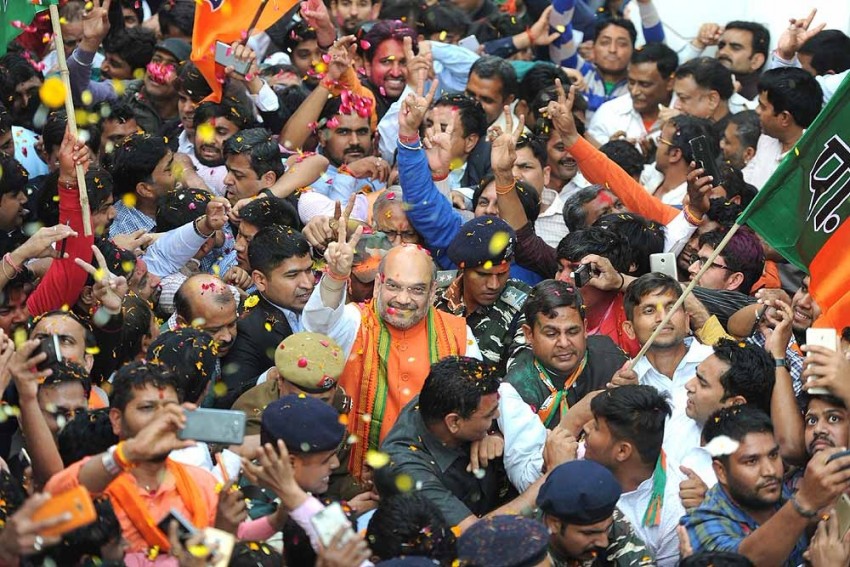 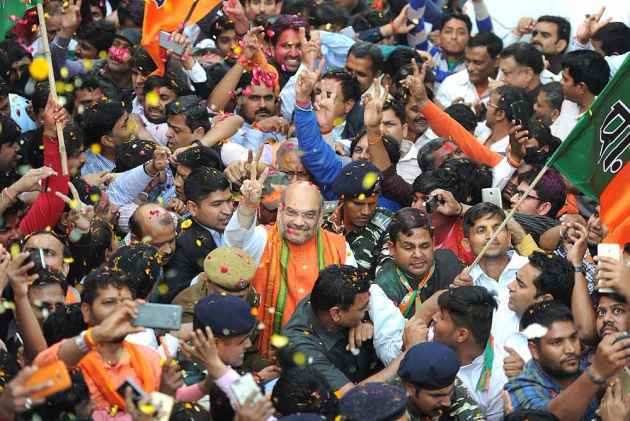 As Kannada activists took out a procession in Bangalore on Thursday when the city shut down for a Karnataka bandh, they were sharing TV screen space with BJP national president Amit Shah's election rally in Mysore -- an unusual situation as bandhs go.

Shah, who landed in Mysore for the last leg of his party's parivarthana yatra, accused the Siddaramaiah government of backing the shutdown in a bid to scuttle his rally. "Even today, the Congress hasn't forgotten its non-democratic ways of the Emergency," he said. "I've come to challenge the Karnataka CM. Do whatever you can, you cannot stop the BJP from forming the next government in the state," Shah said.

The bandh was called by Kannada organisations and farmer groups to demand Prime Minister Narendra Modi's intervention in the long-standing Mahadayi  river water dispute between Karnataka and Goa, an issue that's taken centrestage as the election season hots up. The BJP is crying foul as another bandh is being planned for February 4, when Modi is scheduled to visit Bangalore for a rally.

"People have been protesting for the past year-and-a-half. Let Shah first convince the PM to mediate in the matter," Siddaramaiah told reporters, when asked for a response.

Final hearing in the Mahadayi (called Mandovi in Goa) river water dispute will be taken up by a tribunal in February. Things had come to a head last month with the BJP's Karnataka president B S Yeddyurappa brandishing a letter written to him by the Goa Chief Minister Manohar Parrikar to claim a breakthrough. The move, many reckon, boomeranged and farmers' groups turned their ire towards the BJP by stepping up protests.

Kannada organisations, however, are asking why Shah didn't refer to the water issue in his address on Thursday. "They (BJP) should not have held a rally if they were concerned about the issue. The entire country knew about the bandh, he (Shah) could have at least mentioned the issue out of courtesy," activist Vatal Nagaraj told a television channel.

Generally, observers reckon that Siddaramaiah has been able to steer the politics over Kannada identity in his favour in recent months, most visibly by backing the demand to remove Hindi signages in the Bangalore Metro stations and the move to design a state flag. To be sure, it's a domain Siddaramaiah has long been associated with, having headed the Kannada Kavalu Samiti (Kannada Watchdog Committee) for implementation of Kannada as official language in the early 1980s.

"The Mahadayi issue is significant in north Karnataka. The question is about drinking water, so this is an emotional issue," says Harish Ramaswamy, professor of political science at the Karnatak University in Dharwad.

Meanwhile, the BJP pointed to its Mysore rally and also certain pockets in the state where, reports say, the bandh didn't disrupt normal life. "Congress's flop bandh is a clear indication that Kannadigas have rejected the destructive politics of @siddaramaiah and are eager to welcome the positive & constructive governance of Shri @BSYBJP (B S Yeddyurappa)," the party state unit tweeted. Assembly elections are due in Karnataka in a few months.

In his address at Mysore, Amit Shah attacked the Siddaramaiah government on a range of issues, alleging corruption, apathy towards farmers' suicides and minority appeasement by celebrating Tipu Sultan Jayanti. Shah also repeated his party's allegation that more than 20 activists affiliated to the Sangh Parivar had been murdered in Karnataka during the Congress government's term. It's a charge the ruling party claims is misleading. It maintains that 9 of 23 deaths were 'communal' and that in many cases Hindutva groups too were involved.

"As @AmitShah has lied once again, a complaint will be filed against him for misleading the people of Karnataka," tweeted the Karnataka Congress' working president Dinesh Gundu Rao.