From the airport to the venue, BJP flags lined up both sides of the street, as party workers wearing saffron celebrated in the streets. 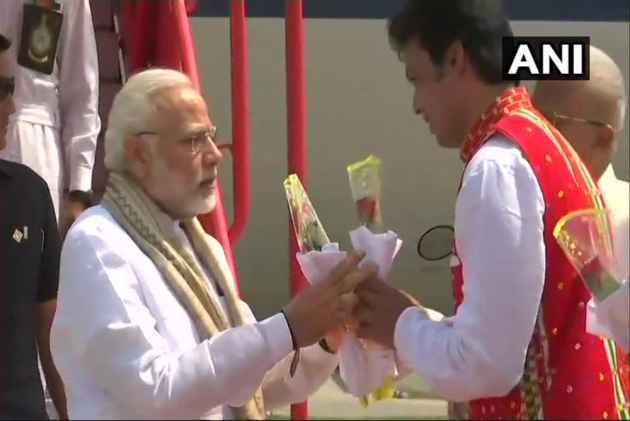 The political hue of Tripura has changed from red to saffron, and perhaps at no other place is the transition more evident than in the state capital, where a BJP government took charge for the first time.

Agartala: #BiplabDeb takes oath as the next Chief Minister of #Tripura pic.twitter.com/yjfqx5m88B

From the airport to the venue, BJP flags lined up both sides of the street, as party workers wearing saffron celebrated in the streets.

Security was heightened in the capital city as the prime minister and many other dignitaries attended the ceremony.

In the history of India, there are some elections that will always be discussed. The 2018 #Tripura elections will be one such example. People will continue to discuss these polls: PM Narendra Modi in Agartala. pic.twitter.com/Rtymv91trj

Chief ministers of various states streamed in to attend the function, hailing the victory of the party, which decimated 25 yeas of uninterrupted rule of the CPI (M)-led Left Front government in the north eastern state.

"A 100-ft-long stage was erected for the big function. This is a big day for us as it marks a political transition for the state. The victory has been made possible by the development work of Modiji that has inspired our workers in Tripura to work for a change," BJP general secretary Ram Madhav told PTI in Agartala.

Gujarat Chief Minister Vijay Rupani said the rise of the BJP in Tripura also shows the "fall of the Left" in the country.

"Red has been replaced (with saffron) in Tripura. Left is losing its ideology in the country and its support base is eroding. The new government firmed here is an endorsement of the vision of Modiji and the popularity that he enjoys," he said.

"I have come from one end of the country to the other for the ceremony, passing by many BJP states. Change will happen more as we progress ahead," he added.

Long-time RSS volunteer Biplab Deb took the reins of Tripura's chief minister at the grand ceremony along with his council of ministers.