Tripura Journalist's Murder: Why Do indigenous People Perceive Bengali Media As Biased Against Them?

Tripura Press is a fraternity and industry within which there is no room for any indigenous people’s voices. The language of power is Bengalese which is not understood across the grassroots 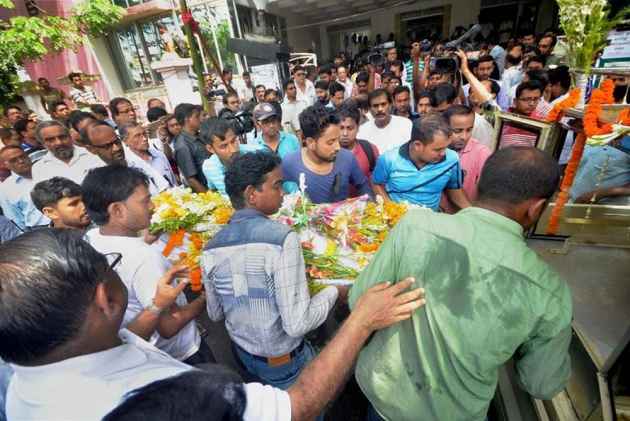 If one goes by the media reports in Tripura, which again feeds the media outside the state, it is a foregone conclusion that the young TV journalist Santanu Bhowmik was killed by the Indigenous Peoples’ Front of Tripura (IPFT) activists while he was covering the skirmish between them and an organization called the Tripura Rajaer Upajati Ganamukti Parishad (TRUGP) on Wednesday evening (20 September, 2017)  for the TV channel Din Raat.

For one thing, activists of the IPFT say that though the Tripura media often refer to the organization ‘TRUGP’ , terming it the “the indigenous people’s wing of the CPM”.  This organization is not registered either as a political party or an NGO, alleging that it is just a nomenclature cleverly used to show that the indigenous people are divided within and are fighting among themselves.

A  Press Release from the Borok People’s Human Rights Organisation (BPHRO),  while condemning the ‘barbaric’ killing of Bhowmik, a young journalist during a clash between the men of the IPFT and the Left Front cadres, found no evidence that he was there to cover the incident.  The PR said that  “as per reports from the field at Mandai… the deceased also took part along with the Ruling Left Front cadres during the confrontation without any evidence of being a media person i.e. camera etc; who subsequently found to be a media person”.

The TV Channel he worked for was seen to be pro-CPM, though his colleagues denied that he was from the Left Front. But, another controversy surfaced when a heavyweight of the Left Front Government, minister, Badal Choudhury, raised his hand in the red salute, usually given in honor of fallen comrades, over the deceased journalist’s body at his funeral.

The human rights organization called for bringing the killers of Bhowmik to book immediately while urging the State Government to do justice. At the same time, the BPHRO called on the Tripura media to focus impartially on what is happening in the state, pointing out that during the Wednesday’s run of clashes, dozens were injured, while two  persons, one a minor named Kwsrung Debbarma (15) and a 35 year old, Kabimoy Debbarma received bullet injuries allegedly from Tripura State Rifles personnel while another man, Swapan Debbarma was brutally assaulted to the point of death by the TSR personnel. None of this was reported by the Press, the HR organization said.

There is a long list of grievances of the people from the tribes against the state media which routinely defames them, the BPHRO statement said.

It is in this background that one needs to read the message in the death of Santanu Bhowmik, an experienced journalist, who seemingly jumped into a murderous melee in Mandai, West Tripura, about 25 kilometers from the capital, Agartala, between two rival groups, the IPFT and the Left Front cadres, as identified by the BPHRO.   Mandai is in fact, the same village where one of the worst tribal-non-tribal massacres  (June 1980) ever  happened, spewing out the then hidden communal crack out into the open and splitting the state into two broad communal camps forever, that of the tribal and the non-tribal.

Stripped down to its DNA, the conflict in Tripura can be traced to a single cause: A lethal struggle for control of destiny between its indigenous tribes on one hand and the migrant community on the other. Various indigenous people’s organisations see themselves engaged in what they describe as an epic struggle for survival against a relentless flood of migration, historical and ongoing. In 1948, they point out, the host population constituted 82 percent of the total population which has changed today to below 30 percent. As far as these organizations are concerned it’s a no-holds-barred war that has been going on unnoticed by the outside world. They say that they are victims of an out and out case of ‘democide’, where the migrant population rules the State and has a strangle-hold on their fate only because of their superior numbers.

Analysts see the rising graph of such skirmishes as a manifestation of the routine ‘election mode’ with the fights multiplying because of the search for political alignments among the various parties and groups in view of  the ensuing Assembly elections slated for  February next year. Particularly worrying for the ruling CPM on this occasion is the clout of BJP, the party ruling the country, added to the rivalry with its traditional adversary, the Congress. It is enough to scuttle the game for the CPM if it misses a step and therefore the desperate turf war.  Between the three major political parties, the indigenous people’s organisations with their own internal groups and divisions are pawns in the wider political canvas.

Other observers though point out that the flash-points have become denser because the IPFT and its allies have jacked up campaign over the past two years for a separate State to be carved out of the Tripura Tribal Autononomous District Council (TTADC) territory, a last resort battle for tribal survival  as they claim. Their road-blockades, bandhs, naked demonstrations and processions for a separate state have become a thorn in the flesh of the government. It is an easy target for any trouble-makers from the opposing groups, particularly the CPM, the ruling party and its allies.

It is in this backdrop of extreme polarisation that one needs to understand every situation in Tripura. It is in this context that the indigenous people’s organisations  see the workings of the media, that it is not perceived as a neutral institution disseminating the news and honestly questioning power but one which routinely promotes the views of the State and thereby, the majority community. The Tripura Press is a fraternity and industry within which there is no room for any indigenous people’s voices, thereby lacking any reflection of their vision or their politics. The language of power is Bengalese which is not understood across the grassroots. The opinion paraded by them is largely oriented towards the ruling Government led by the CPM and glosses or ignores anything contrary to that.

Every journalist swears by the rule that a story at least has two sides. But, the indigenous peoples’ activists say that in Tripura ‘the story has just one side’, and that is of the Government.  The various newspapers and TV channels routinely make highly defamatory statements about the clashes and arson putting the entire blame on the tribes-people and their organizations even before there is an investigation as it happened in August last year. Sometimes, the lies are blatant. But, without any neutral platform that addresses their concerns, their version has never found a place where the larger masses can see and ponder over it, they say.

The views expressed are author's personal