Telangana Rashtra Samithi members on Thursday shouted slogans, displayed placards and later tore them and threw the pieces in the Well of the Lok Sabha before walking out of the House while protesting over farmers' issues. 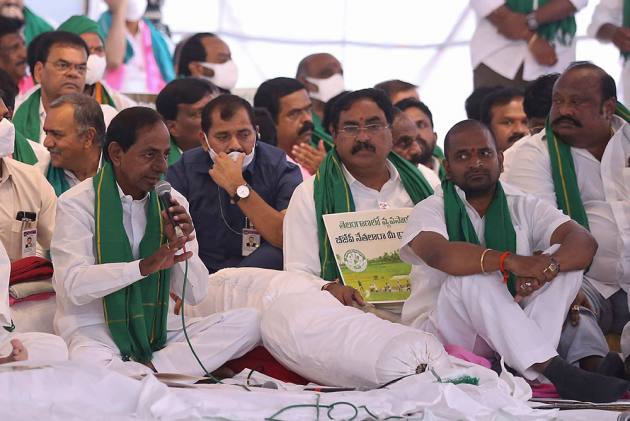 Within minutes of the commencement of the Question Hour, TRS members trooped into the Well displaying placards and later began shouting slogans. They wanted to raise issues related to farmers, including compensation for the families of those who lost their lives during the protest against three farm laws.

The farm laws have now been repealed. They were also demanding a bill on the minimum support price.

Congress leader Adhir Ranjan Chowdhury asked why the government was not listening to the TRS members. Agriculture minister Narendra Singh Tomar was present in the House.

TRS leader Nama Nageswara Rao said Telangana is one of the biggest producers of paddy in the country but the Centre was not procuring paddy from the state.

Soon after, the party members, standing in the Well, walked out of the House. While walking out, they tore the placards and threw the pieces in the Well. Later, the House staff cleared the Well by removing the torn pieces of placards.

During the Question Hour, there were also protests by DMK members when Union minister Hardeep Puri was responding to a question on smart cities. The Winter session is scheduled to conclude on December 23.