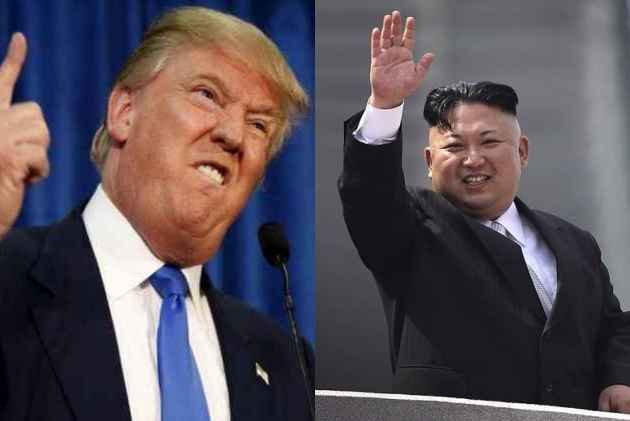 US President Donald Trump has agreed to meet North Korean leader Kim Jong-un by May, a top South Korean official announced today even as the White House said the two leaders would meet "at a place and time to be determined".

South Korean National Security Adviser Chung Eui-Yong, who led his country's delegation to Pyongyang for talks with the North Korean leaders, made the announcement at the White House hours after he briefed Trump and his national security team.

Chung attributed the North Korean turnaround to Trump's leadership and his maximum pressure policy together with international solidarity.

In his meeting with the North Korean leader, Chung said Trump is committed to denuclearization of the Korean Peninsula.

"Kim pledged that North Korea will refrain from any further nuclear or missile tests. He understands that the routine joint military exercises between the Republic of Korea and the United States must continue. He expressed his eagerness to meet President Trump as soon as possible," he said.

"President Trump appreciated the briefing, and said he would meet Kim Jong-un by May to achieve permanent denuclearization. The Republic of Korea, along with the United States, Japan, and our many partners around the world, remain fully and resolutely committed to the complete denuclearization of the Korean Peninsula," Chung said.

"Along with Trump, we are optimistic about continuing a diplomatic process to test the possibility of a peaceful resolution," he said.

"The Republic of Korea, the United States, and our partners stand together in insisting that we not repeat the mistakes of the past, and that the pressure will continue until North Korea matches its words with concrete actions," the South Korean national security adviser said.

Reacting to the announcement White House Press Secretary Sarah Sanders said, "President Trump greatly appreciates the nice words of the South Korean delegation and President Moon. He will accept the invitation to meet with Kim Jong Un at a place and time to be determined."

She added that the sanctions on the reclusive nation must remain.

"We look forward to the denuclearization of North Korea. In the meantime, all sanctions and maximum pressure must remain," Sanders said.

According to a senior administration official, Trump may meet the North Korean leader in couple of months.

"We can pursue more diplomacy, as we keep applying pressure ounce by ounce. Remember, North Korean regimes have repeatedly used talks and empty promises to extract concessions and buy time," he said.

"North Korea uses this to advance its nuclear and missile programs. We've got to break this cycle. The United States and South Korea must stand shoulder-to-shoulder in applying the sustained pressure needed to peacefully end this threat. And Beijing must do its part," Royce said.