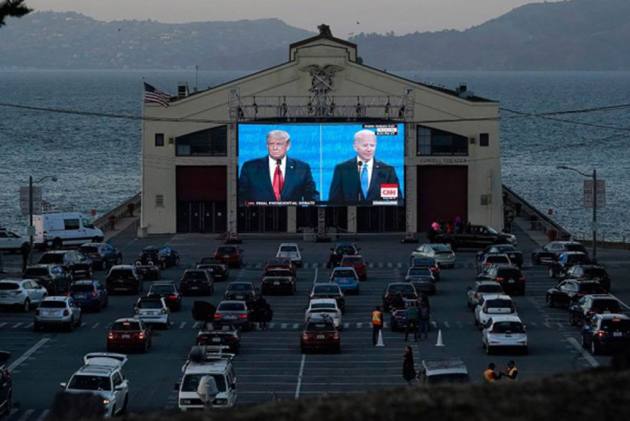 US President Donald Trump and his Democratic challenger Joe Biden on Monday made a last-ditch attempt to woo the country’s undecided voters.

The two candidates spent their Sunday campaigning in swing states ahead of Tuesday's election. Trump toured five battleground states--Michigan, Iowa, North Carolina, Georgia and Florida while his rival spoke at a campaign event in Pennsylvania. On Monday, Trump will campaign through Wisconsin and Pennsylvania.

Both Biden and Trump are also trying to woo Indian-American voters, one of the critical voting blocs in this year's election.

Despite the raging Covid-19 pandemic, Americans have turned up in large numbers and many have already cast their votes as part of the early voting system. As many as 93 million ballots, about two-thirds of the overall 2016 vote count have already been cast as part of this year’s elections. Of the 93 million votes, 33 million account for in-person votes and 58 million account for mail-in ballots. Overall, 239 million Americans are eligible to vote this year.
The mail-in ballots can take weeks to be counted in some states, which means that a winner might not be declared immediately after polls close on Tuesday.

National polls continue to show Biden leading, by about 8 percentage points. However, its important to note that the outcome of the US elections is not determined by national popular vote, but rather depends on the 538-member Electoral College with each candidate needing a majority of 270 to win the presidency.

In all but two of the country's 50 states, either Trump or Biden will win all the electors from each state by winning the popular vote there, with the most populous states holding the most electors.

The coronavirus pandemic has been a major election issue. The US has recorded more cases and more deaths than any other country worldwide, reporting more than 81,000 new infections on Sunday alone. Currently, 9.2 million people are affected by the disease.
Biden, who has criticised the Trump administration's handling of the coronavirus pandemic, has said that if voted to power, he would put into place a Covid-19 action plan on the first day of his presidency.

"Our president has failed in his most basic duty to this nation: to protect us. It’s unforgivable," Biden tweeted. The US economy saw record-breaking 33 per cent growth in the third financial quarter of this year, following a record 31 per cent contraction in the second.
On Monday, Trump and Biden started a war of words on Twitter regarding the economy.
"Under my leadership, our ECONOMY is now growing at the fastest rate EVER recorded-33.1%! While foreign nations are in freefall, we are creating the world’s greatest ECONOMIC POWERHOUSE! Get out and VOTE on November 3rd, so we can keep it going!" Trump tweeted.

Not to be outdone, Biden also took to Twitter to urge his supporters to come out and vote on Tuesday. "Vote for respect. Vote for decency. Vote for truth. Vote for leadership. When you use your voice and vote, things can - and will - change for the better," Biden tweeted.

Before leaving for campaigning, Trump in a tweet exuded confidence that his numbers are looking very good. “Our numbers are looking VERY good all over. Sleepy Joe is already beginning to pull out of certain states. The Radical Left is going down!” Trump tweeted.

Biden heads into the final day of campaigning with a big lead in national polls and ahead in sufficient swing states to allow multiple routes to the 270 electoral votes needed to win the White House.

"We feel very confident about our pathways to victory," Biden’s senior adviser Anita Dunn said. Biden is hoping that wins in states like Arizona, Florida, Georgia or North Carolina could send an early signal on Tuesday night about his road to victory.

Counting in midwestern battleground states like Michigan and Wisconsin, where Biden is expecting to do well, could take longer and lead to the kind of disputed outcome that President Trump has been signalling.

Trump on Sunday denied that he is planning to prematurely declare victory after the presidential polls are over but hinted that he is gearing up for a legal battle against a vote count that stretches past Election Day.