Trump Breaks Royal Protocol In First Meeting With The Queen

His previous comments about the royals have been less tactful, including boasting he would have slept with Diana, princess of Wales "without even hesitation", and saying "who wouldn't" photograph the Duchess of Cambridge topless. 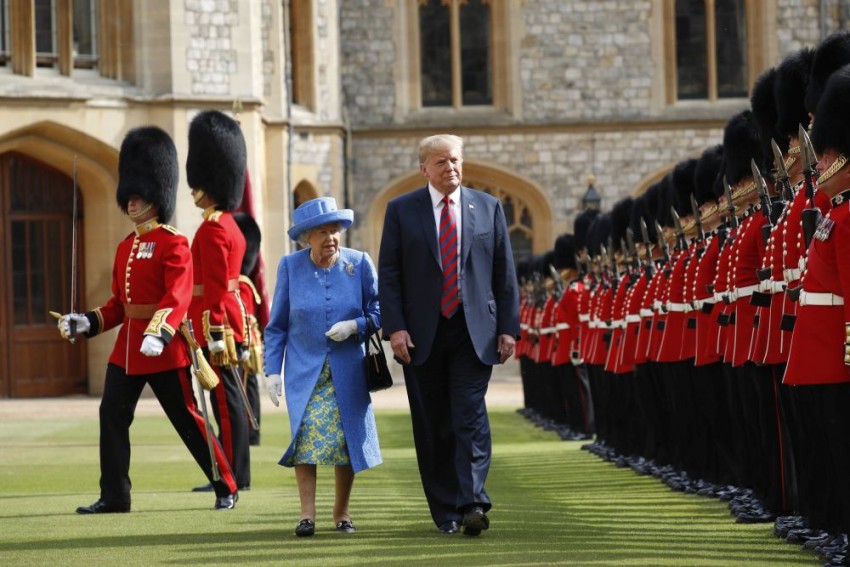 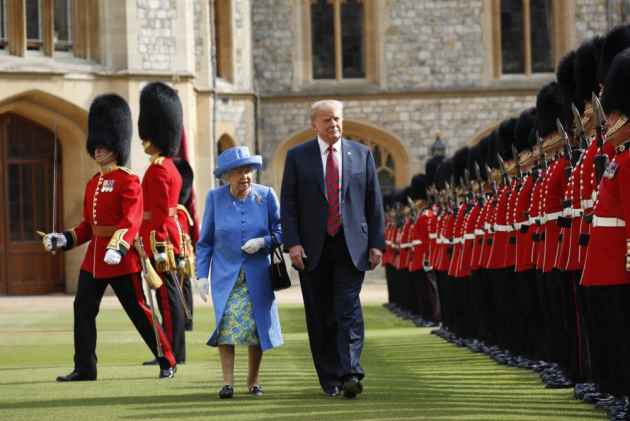 Queen Elizabeth II welcomed US President Donald Trump for tea at Windsor Castle on Wednesday - a meeting which many Britons find the toughest part of his already contentious trip to swallow.

Trump walked ahead of the 92-year-old while inspecting troops and did not bow when he met her - a couple of minor protocol breaches - but the meeting went smoothly.

Trump was gracious about the British sovereign in a newspaper interview out yesterday in which he attacked Prime Minister Theresa May's strategy on Brexit.

However, his previous comments about the royals have been less tactful, including boasting he would have slept with Diana, princess of Wales "without even hesitation", and saying "who wouldn't" photograph the Duchess of Cambridge topless.

Some 1.86 million people signed a petition at the June 2017 general election, wanting to prevent Trump from making a state visit "because it would cause embarrassment to Her Majesty the Queen".

His four-day trip to Britain is not a state visit - with the formal trappings of a carriage procession and certain banquets - but it bears many of the hallmarks, including time with the head of state.

A YouGov poll of 1,648 British adults conducted on Monday and Tuesday found that half thought Trump's working visit to Britain should go ahead, with just over a third thinking it should be cancelled.

However, the meeting with Queen Elizabeth on his first visit to Britain as US president still seems to rankle.

Just one in three (35 per cent) thought the monarch should meet Trump, as opposed to half (49 per cent) who thought she should not.

Trump was treated with a guard of honour when he arrived at Windsor Castle, west of London. The Coldstream Guards gave a royal salute and played the US national anthem.

The two heads of state inspected the guard before watching them march past, in the castle's quadrangle.

The Trumps then went for tea with Queen Elizabeth.

"For so many years she has represented her country, she has really never made a mistake. You don't see, like, anything embarrassing. She is just an incredible woman," Trump told The Sun newspaper.

"My wife is a tremendous fan of hers. She has got a great and beautiful grace about her." His previous comments about members of the royal family have not been so generous. Buckingham Palace said no other royals will be meeting him at Windsor.

Trump has previously spoken about Prince William's wife Kate and his late mother Diana. William, second in line to the throne, is the monarch's grandson.

In a 1997 interview, just weeks after Diana's death, US radio host Howard Stern asked Trump if he "could have nailed her".

Trump replied: "I think I could have."

In 2000, Stern asked Trump if he would have slept with Diana. The tycoon replied: "Without even hesitation.

"She was crazy, but these are minor details."

In 2012, after Kate was photographed sunbathing topless in France, Trump weighed in on Twitter.

"Who wouldn't take Kate's picture and make lots of money if she does the nude sunbathing thing. Come on Kate!" he wrote.

"Kate Middleton is great -- but she shouldn't be sunbathing in the nude -- only herself to blame."

Trump will not be meeting Queen Elizabeth's eldest son and William's father Prince Charles, the heir to the throne.

A January 2017 report in The Sunday Times newspaper said Trump and Charles would not meet during his visit to Britain due to their strongly divergent views on climate change.

Prince Charles is a keen environmentalist.

A source close to Trump was quoted as saying: "He won't put up with being lectured by anyone, even a member of the royal family. Frankly, they should think twice about putting him and Prince Charles in the same room."

There have been 13 US presidents since Queen Elizabeth's reign began in 1952, and, including Trump, she has met them all, barring one: Lyndon B.

133 Killed, More Than 125 Injured In Twin Election-Related Blasts In Pakistan