Trump & Modi: Sameness Of Being

The Similarities between India's Prime Minister and the man bidding to become America's next President are uncanny. 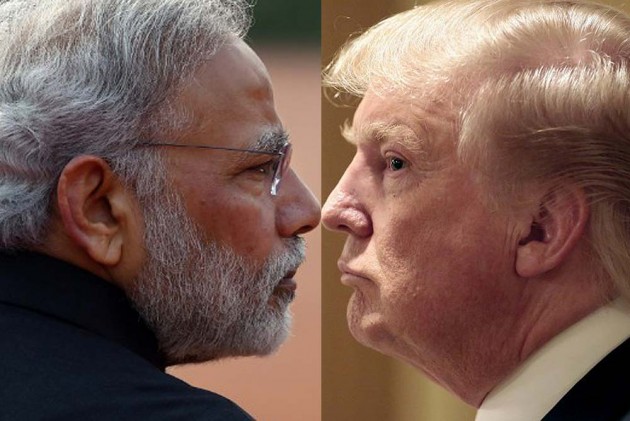 In India, Narendra Modi rode to power with the promise of 'Acche Din'. In America, Donald Trump pledges to "make America Great Again". Both men were/are suggesting that previous administrations/governments had dropped the ball and allowed things to drift. The subliminal suggestion is that the Supermen have arrived to set things right. Then there is the political affiliation. Both gravitated to right wing, conservative political parties, the BJP in India and the Republicans in Trump's case. In terms of the ideology they represent, both leaders appeal strongly to that type of constituency. Indeed, the similarities between the man who became India's Prime Minister and the man who is bidding to become America's next President is almost uncanny.

Trump's critics have targeted him on a variety of issues but mainly for his views on immigration and his pledge—repeated during his victory speech in New Hampshire—that a wall will be built to keep out Mexican immigrants. He labeled Mexicans as 'drug dealers, criminals and rapists' and has claimed that there is a 'mindboggling' link between rape and illegal immigration. Now, hear the echo. This is what the BJP's election manifesto in 2014 said: 'Immediate steps will be taken to stem the tide of illegal immigration from Bangladesh to Assam and other north-eastern states. The construction of the India-Bangladesh border fence will be completed without any further delay.' The BJP also in a number of campaign speeches refereed to Bangladeshi infiltrators as criminals and rapists. The fact that they are Muslims is significant.

The sharpest attack on Trump from the liberal democrats revolves around the charge that he is rabidly anti-Muslim. Trump is on record as having proposed banning all Muslims from entering the United States, and he has been quite open about his antagonism towards the community. Modi too was branded anti-Muslim in the wake of the Gujarat riots. In September 2011, he was caught on television refusing to put on a skull cap offered by a Muslim cleric during a religious event in Ahmedabad. His ministers have been guilty of rabid anti-Muslim rhetoric, most notably during the Bihar elections, and since Modi made no effort to contradict them, his image of being hostile towards India's second largest community is something he has been unable to shake off till now. In fact, it is a weapon that the Congress-led Opposition uses frequently to attack him with.

Then there is the charge of misogyny against both. Trump has been slammed for his condescending treatment of women on his reality show, The Apprentice. In a recent feature for Rolling Stone magazine, Trump took a sexist jibe at fellow Republican presidential candidate Carly Fiorina and said: 'Look at that face! Would anyone vote for that? Can you imagine that, the face of our next President?!' He was also slammed for his quote against Ariana Huffington, co-founder and editor-in-chief of the Huffington Post on Twitter: '@ariannahuff is unattractive both inside and out. I fully understand why her former husband left her for a man—he made a good decision.' He is currently under fire for refusing to take part in a debate where a female television anchor for Fox TV would be present.

How does Modi fare on the sexist index? In a recent comment, he said: "I am happy that Bangladesh prime minister, despite being a woman, has declared zero tolerance for terrorism." The 'despite being a woman' part led to him being labeled sexist. In 2012, in a public rally, Modi had called Shashi Tharoor's late wife Sunanda Pushkar a '50 crore girlfriend'. 'Wah, kya girlfriend hai. Apne kabhi dekha hai 50 crore ka girlfriend?' he had said. In the same year, as chief minister of Gujarat, he told the Wall Street Journal that Gujarat's malnutrition problem could be attributed to the fact that five year old girls in Gujarat were 'figure-conscious and beauty conscious!"

There's also much that is matching in their personalities. Both are flamboyant, larger-than-life individuals who are seen as strong, decisive leaders who can think out of the box. Both show strong traces of ego. If Modi had his monogrammed suit, Trump has his name on all his buildings—the Trump Tower in American cities and on both the real estate high rises he has lent his name to in Pune and Mumbai. Even his casino is called Trump Taj Mahal. He once said: "Show me someone without an ego, and I'll show you a loser— having a healthy ego, or high opinion of yourself, is a real positive in life!" Modi also encourages the use of selfies and images of himself, as in the Modi masks that are now ubiquitous at all his rallies. There's more. In the flashy event in Pune to unveil the property, Trump told the emcee Lara Dutta: "You can say I've brought theatrics to real estate."

Modi has, from all we have seen in the last 20 months, brought theatrics to politics. Both love the big stage, the big occasion. There is also no doubting that both are incredibly ambitious with the ability to think big. Trump is a billionaire many times over but in his campaign speeches he has made it clear he is pro-business and wants America to replace China as an investment-friendly destination. Trump's book The Art of the Deal is widely seen as to be a manifesto for crony capitalism. Modi, riding on his development agenda, is equally seen as pro-business—the 'suit-boot sarkar' as Rahul Gandhi famously said. Throughout his stint in Gujarat and now in the PMO, Modi is frequently seen rubbing shoulders with CEOs and corporate heads as part of his strategy to attract investment and push his Make in India initiative. Trump has promised to create more jobs than any other President in America's history, and Modi has done the same. Both indulge in hyperbole. Trump's promises to make America great again and Modi's many promises, including the one to bring back black money from abroad within 100 days.

It goes without saying that both are hyper active on social media. Trump has over 2 million followers on Twitter while Modi has four times that number. They also face similar "enemies" as they see them, basically, that section of the media and population that adopt liberal, democratic views. Trump calls such people ant-patriotic and anti-American. Modi, or his followers, express similar views. The Modi government has boycotted certain media outlets because they were critical. Trump has done the same with Fox News thanks to its aggressive female prime time anchor who asked him some uncomfortable questions in an earlier interview.

Paradoxically, it is because of their views and public perception that both men get a disproportionate amount of media coverage. Modi earned it during his initial days in office and on his many foreign trips while Trump dominates the American media like very few Presidential candidates have done. Trump has received more coverage on the news than his 16 rivals combined according to an analysis for CNN's Reliable Sources. Both elicit strong reactions, for and against, and are often accused of divisive politics. And here's the most obvious similarity—both seem impervious to criticism of any kind, media or otherwise.

In that sense, both Modi and Trump display dictatorial tendencies. Both make a supreme effort to sell their own achievements. Modi with the many schemes and acronyms he has come up with, and Trump who keeps flaunting his success as a businessman. Both are adept at blaming the previous regime for failing to deliver—Trump is constantly blaming President Obama for the economy, for not being tough enough on terrorism, for social unrest and lack of investment. Modi has been singing the same tune in India vis a vis the Manmohan Singh government. Both also have no hesitation in launching personal attacks against perceived enemies—Modi's constant attacks on the Gandhi family and others in the opposition, while Trump's attacks on individuals make headline news every day.

At the end of the day, there are some similarities that are quite positive. Both are driven and achievers who believe they are destined for great things. They both believe that they are the only ones who can take their respective countries to great heights. They are also able to motivate large sections of their fellow citizens. If Trump does become America's next President next November, the index of similarities will be complete.