Trump Orders Ban On Most Transgenders From Serving In US Military 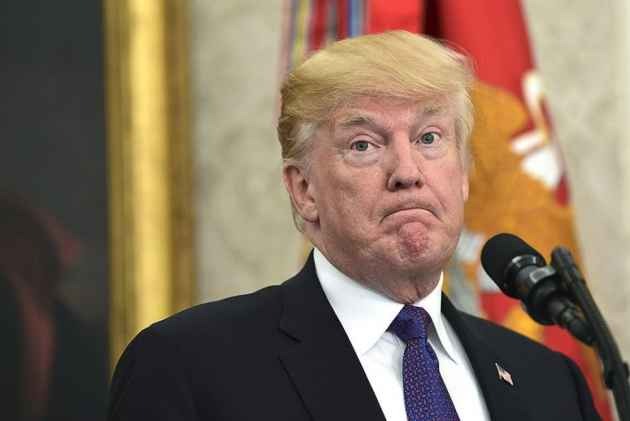 President Donald Trump today issued orders to ban most transgender people from serving in the US military except under "limited circumstances, following up on his controversial proposal last year that sparked widespread backlash by LGBT rights groups.

In his presidential memorandum, Trump said transgender persons with a history or diagnosis of gender dysphoria -- those who may require substantial medical treatment -- are "disqualified from military service except under certain limited circumstances."

The memo did not elaborate on possible exceptions, but said the secretary of defence and secretary of homeland security "may exercise their authority to implement any appropriate policies concerning military service by transgender individuals".

He allowed those transgenders who are already in the military to continue with their service.

Trump had signed a memorandum in August last year that barred transgender people from the armed forces, but it was blocked in court two months later after transgender troops took the policy to court.

White House press secretary Sarah Sanders said in a statement that Trump had rescinded his previous policy to allow this new policy to take its place.

The new policy, the White House said, was "developed through extensive study by senior uniformed and civilian leaders, including combat veterans," under the direction of Defense Secretary James Mattis.

"I hereby revoke my memorandum of August 25, 2015 and any other directive I may have made with respect to military service by transgender individuals,” Trump said in the memorandum.

The memo said the experts' study sets forth a policy to enhance US military's readiness, lethality, and effectiveness.

"On the advice of these experts, the Secretary of Defence and the Secretary of Homeland Security have concluded that the accession or retention of individuals with a history or diagnosis of gender dysphoria—those who may require substantial medical treatment, including through medical drugs or surgery—presents considerable risk to military effectiveness and lethality,” the White House said.

“This new policy will enable the military to apply well-established mental and physical health standards—including those regarding the use of medical drugs—equally to all individuals who want to join and fight for the best military force the world has ever seen,” memo said.

The Democrats slammed Trump for his new policy on transgender.

"This latest memorandum is the same cowardly, disgusting ban the President announced last summer. No one with the strength and bravery to serve in the US military should be turned away because of who they are,” Democratic leader Nancy Pelosi said.

"The President's hateful ban is purpose-built to humiliate our brave transgender members of the military who serve with honor and dignity. It will harm our nation's readiness and hollow out our strength, for we only strengthen our military by honoring our values of freedom and equality.

"Once more, the President's agenda of hate and prejudice is dictating our national security, instead of honor, decency and strength,” she said.

California Attorney General Xavier Becerra said his State will take every measure available to prevent Trump's discriminatory action that harms or marginalizes transgender service members or any other transgender Americans who wish to courageously defend the nation.

“We must honor all those who serve in our military and sacrifice their lives to fight for the safety of our nation,” he said.

“This policy is not based on an evaluation of new evidence. It is reverse-engineered for the sole purpose of carrying out President Trump's reckless and unconstitutional ban, undermining the ability of transgender service members to serve openly and military readiness as a whole,” Block said.

This decision is an insult to our brave transgender service members and all who wear US uniform, said the Democratic Party.

“Instead of fulfilling his oath to protect the American people, Donald Trump and Mike Pence are putting our nation's security at risk and shoving real American patriots back in the closet,” it said.